Fighting games can be a complicated business. Sometimes it’s nice to revisit fighting games of old, when things were (in some cases) a bit simpler. Which isn’t to say Samurai Shodown 4: Amakusa’s Revenge doesn’t have depth, but it’s wonderfully compelling in its delicious simplicity and penchant for brutal, decisive strikes.

A mysterious castle has appeared in Shimabara, belonging to the resurrected and malicious Amakusa. He’s kidnapped sorceress-in-training Hazuki Kazama. One of 17 characters has to fight their way through opponents to make it to the castle and take down Amasuka. Depending on how long it takes to get to the castle, the ending will play out differently. 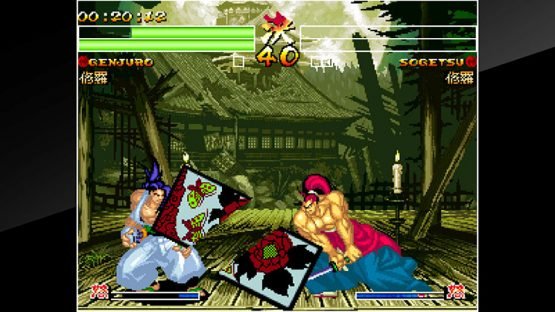 Samurai Shodown 4 is wonderfully compelling in its delicious simplicity and penchant for brutal, decisive strikes.

Fights in Samurai Shodown 4 are very weapon-centric, with three of the game’s four buttons being dedicated to slashes (weak through to strong). The slashes can be blocked by holding back, or dodged for a swifter response. Often you’ll end up trading a flurry of blows, blue sparks flying as you do, waiting for the right opening — will you try to throw them off with a low, weaker slash, or try to push through with a devastating, though more easily blocked, series of heavy slashes?

Blows and counters feel super heavy and tactile, and the heavy damage makes every exchange deadly. It can be a brutally intense game of tennis except with samurai swords instead of rackets, and heads instead of balls. The music switches up depending on the pace of the battle, adding a huge amount of thrill to the matches. When the music really kicks in, you’re both down to a slither of health, both trying to read one another’s final strikes, it’s impossible to not get hyped in a way some modern fighters can’t even manage. 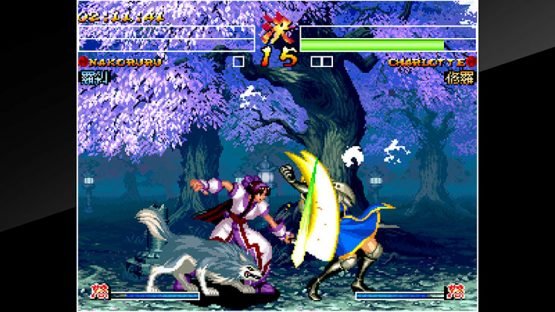 Combos do exist, but are few are far between, with some characters having specific combos they can pull off. Activating the POW-gauge (essentially a damage induced rage meter) will grant access to an option that unleashes a flurry of strikes, or an option for one more deadly precise strike. But Samurai Shodown 4 is at its best when trading steel with one on one blows, ducking and weaving with the dodge and evasion mechanics (think a simple version of King of Fighters‘ dodge system).

No fighting game would be complete without special moves, though. Each character in Samurai Shodown 4 has two different modes to choose from — Slash and Bust. These offer almost an almost entirely different range of special moves for every character, quite drastically changing how they play. It gives you room to play around and find your own groove. It does feel like some characters have special moves that are quite a bit more devastating than others. When the moves aren’t based around weapon usage they can end up feeling more annoying and less in the spirit of things, like Indiana Jones bringing a gun to a sword fight. 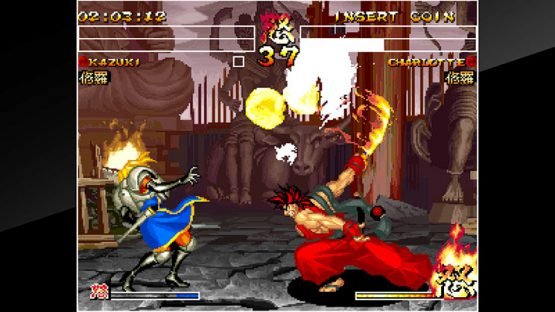 Samurai Shodown 4 looks gorgeous, and it really showcases what was possible with Arcade NEOGEO games back in the day. Not only are the sprites chunky, but there are tonnes of fluid little touches to the animation work that makes them a joy to look at. But if I see Tam Tam do his wiggle-fingers victory pose one more time I am going to explode. It’s an arcade port, so don’t expect online matches (there are online rankings, though), but you can easily set up the Switch for local multiplayer matches. Retro games look especially crisp on the Switch’s portable screen.

The standard Joy-con’s lack of d-pad becomes extremely obvious while playing a fighting game, which is the thing that will annoy you the most about Samurai Shodown 4, or any other fighting game on the system. The analog stick does the job surprisingly well, but when it comes to fine inputs, it’s going to cause some tears. The Pro Controller is available, as well as an upcoming Hori Fight Stick. 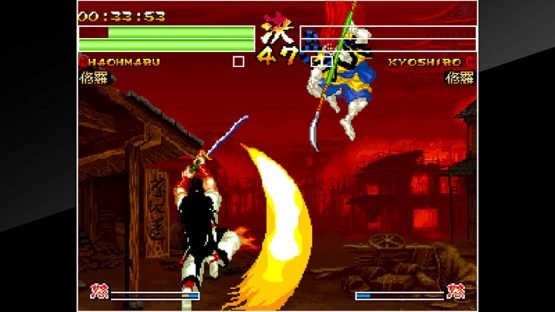 A stripped back game of duelling, clashing, and waiting for the perfect moment to strike.

The time limit on the story is a nice idea, but it often feels pretty hard to control the speed of battles against the AI fighters. The game’s normal setting is already pretty rock solid, so fighting through to the castle is already a challenge, let alone doing it in 8-9 minutes (the exact length of time varies from character to character, and are noted in the digital manual). However, as with the ACA NEOGEO ports, you can play around with the arcade settings and make it easier for yourself it you really want to make it under that time.

“Fair and square”, is what Samurai Shodown 4 chooses to flash at the beginning of each fight. When following that mantra it truly shines — fair and square one on matches where if you fall it’s because you know you should have blocked that strike and not gotten too cocky. Samurai Shodown 4 still feels immensely playable today, and better yet it offers a fighting experience that still manages to be pretty unique. It’s a stripped back game of duelling, clashing, and waiting for the perfect moment to strike.