We might not have mentioned this before, but we love the Ace Attorney series, and it’s a constant source of discussion in the office. As such, we’ve been waiting for any word on the Ace Attorney Trilogy re-release for modern consoles.

With the Japanese release date fast approaching, Capcom have released the second official trailer and a Japanese TV spot for the PlayStation 4, Xbox One, Switch, and PC versions of Phoenix Wright: Ace Attorney Trilogy. which we have linked below for you to view (seriously, “that” music still stirs hype in us, you know the track).

We can’t wait to dive back in and take on the three main Prosecutors (oh, and Winston Payne, bless him) again. The adventures of Phoenix Wright have always appealed owing to their logic-based puzzles and wonderfully convoluted narratives. Also, we find the character of Phoenix himself to be completely relatable, but that’s neither here nor there.

Will you be there at day one to enter the courtroom again? Who is your favourite Prosecutor? Let us know in the comments, or on Twitter and Facebook, and check back for more coverage of Phoenix Wright and other Japanese games. 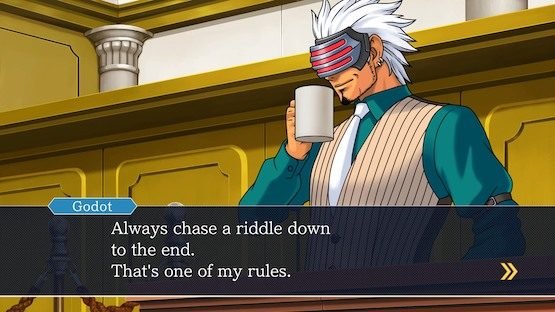 Our favourite is Godot. Just look at him.