Aggelos Out Now on PlayStation 4 and Xbox One

We’ve already seen nostalgic retro platformer Aggelos come to Steam and Nintendo Switch, with very positive reviews, and now it’s following up on PlayStation 4 and Xbox One! Check out the launch trailer below:

Here’s an overview of the game from publisher PQube:

Explore a kingdom full of adventures!

Find your own path through the vast, non-linear kingdom and venture through forests, underwater areas, cave systems and ancient temples to uncover magical elements and new skills! Use and combine them creatively to overcome the unique and deadly bosses and advance in the classic hero story.

The dynamic and diverse movement options make Aggelos a challenging homage to the legendary era of Japanese non-linear 16-bit titles and give players the tools for spectacular and creative combos that feel incredibly satisfying to pull off and offers a level of mobility which sets Aggelos apart from other homages to the Sega classics.

To cater even more towards veterans of the genre and further improve replayability, Hard Mode offers a real difference in how players approach the game. They will now face enemies that deal more damage, have greater movement speed, higher attack rate and shoot additional projectiles. 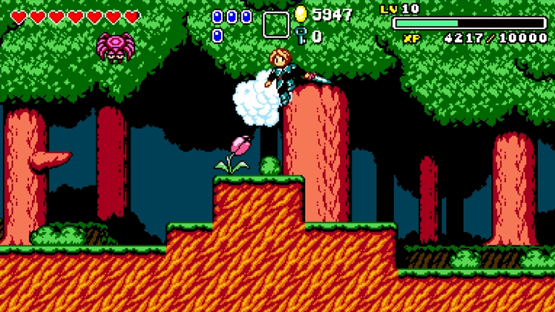 Aggelos is out now on PS4, Xbox One, Switch, and PC via Steam.