PQube have revealed that they are publishing Aokana – Four Rhythms Across the Blue in the West! The award-winning visual novel will be heading to Nintendo Switch and PlayStation 4 this summer. There’s even a new announcement trailer with a song that promises to get stuck in your head. Sorry.

The visual novel has already received an anime adaption and has been universally praised, so it’s no surprise to see this one coming to our shores. Here’s a description of the game, via PQube:

The story of Aokana plays in a world where science finally did it and invented anti-gravity shoes! With the dreamlike ability to freely fly through the skies, a form of sport called Flying Circus became popular, where athletes soar through the air to score points.

Slip into the role of Masaya, a former competitor, that encounters the new transfer student Asuka who strives to learn how to fly. Get involved in the Flying Circus sports club, support the ambitious girls and eventually end up with your own head in clouds! 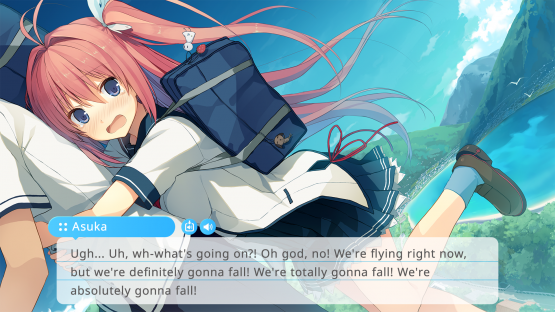 It looks like NekoNyan are in charge of the development side of the localisation of the sprite developed game. I’d like to immediately stake a claim for Misaki as Best Girl, I’m not open for any other arguments.

You can keep up to date with Aokana with PQube here!

Does Aokana go onto your wishlist?