Even with its vast assortment of lovable characters and fan favorite series, Nintendo always introduces a new franchise with each new console generation. Where the Wii U brought Splatoon, the Switch got the equally colorful and crazy fighter ARMS. Is this the knockout we have been waiting for or does this fighter miss its punch? 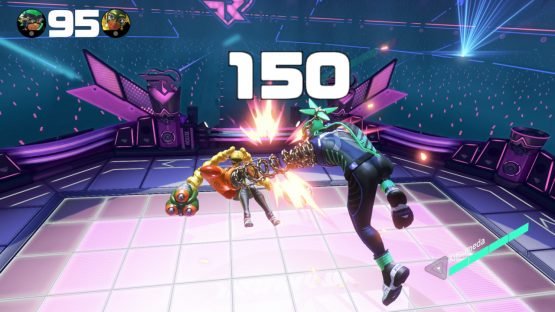 ARMS plays like a fighting game, except you will be throwing springy punching gloves and kitchen appliances at the opponent. The typical Rock-paper-scissors gameplay is here with punches, guards and grabs. While it may lack some elements such as combos and special moves executed by inputting a series of commands, its simple nature offers enough depth and variety to keep from getting stale. Constantly moving around is as important here as it is in real boxing. Just carelessly throwing punches is an easy way to lose the match. Missing a punch can leave you wide open for a counter attack, since it takes some time for your ARM to return back to you. Still you will almost always be at some distance away from your opponent, giving you enough time to react to incoming attacks. You will need to be one step ahead of the opponent in order to get out on top. Charging your punches and curving them to hit where you think enemy will be makes the matches feel a lot more tactical. 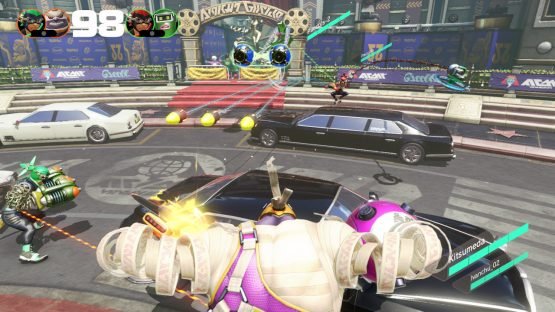 Playing can be a painful endeavor. Not because the game is bad mind you, but because if you choose to go with the motion control route you can easily end up with some serious muscle pain. Hopping onto your feet and physically using your arms will have you easily break into a sweat. Strap on a few wrist weights and the game turns into an exercise routine which is bound to get your scrawny arms into shape in no time.

If for some reason you decide to skip motion controls and use the Pro Controller or Joy-Cons individually or while they are in the grip (shame on you) the game is still perfectly playable albeit a bit less fun without all the flailing around. When it comes to precision the motion controls do a great job most of the time. Yes, there are still times when the character will throw a punch instead of move, or miss blocking an incoming fiery punch, but these issues will rarely cost you the game.

ARMS gives you ten colorful characters to choose from. Whether you pick the nimble Ninjara whos dashes teleport him around, the resilient Master Mummy who doesn’t flinch at incoming hits and can easily heal lost HP while defending, or the seductive Twintelle who is able to slow down incoming attacks, players are bound to find a favorite from this varied cast of characters. 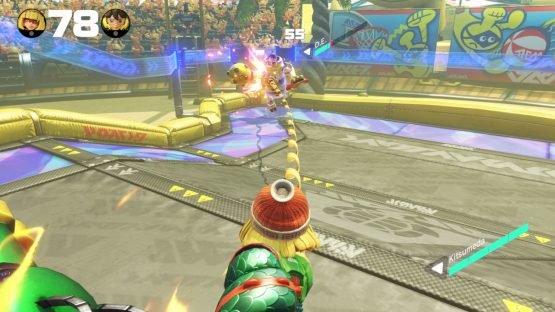 While the roster may not be as massive as in other popular fighting games, the customization options are what sets it apart. Each character can equip two ARMS, one in each hand. These can range from a standard boxing gloves, to rocket launchers, chakrams and even plastic toy hammers. There are 30 in total, most of which come with additional elemental properties when charged up. The toaster can light up enemies when charged, while the Megawatt can electrocute them leaving the enemy stunned for a powerful throw. All characters start out with only three different ARMS unlocked. Some are evidently better than others, so you’ll need to unlock more weapons through a mini-game which costs in-game currency to play.

Levels themselves also have a personality. From always useful cover, to jump pads, to rising destructible blocks, to hoverboards – there is always something you can use to your advantage. There are also random items that sometimes appear in the sky. Knock it down and you can get yourself a nice healing potion or send an explosive ball hurling towards the enemy. 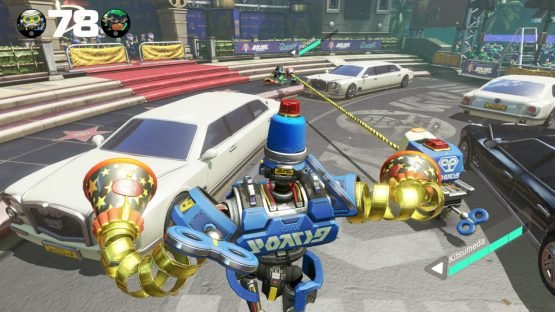 Like Mario Kart before it, the primary focus here is on multiplayer so you shouldn’t expect much in the way of singleplayer. There is an assortment of modes to play. The Versus mode lets you customize your battle and play with up to 4 players locally via split screen. Gran Prix lets you battle through 10 stages alone or with a friend and is the closest the game has to a story mode. Surprisingly the game can be punishingly difficult in the Grand Prix mode. Having done quite well during the Global Testpunch I set the difficulty to 5, just above average from the 1 to 7 difficult scale, promptly after I had my ass handed to me. After that, I had to shamefully lower the difficulty to 3 just in order to complete the Gran Prix mode with a lot of retries. With that said you must beat Gran Prix on a difficulty of 4 or higher in order to unlock the Ranked Match option.

Still, newbie players can immediately jump into online matches in the Party mode and it is here where the game really shines. Once you pick your character you will be transported into a lobby where the game will assign you to random matches. Despite not being able to pick an opponent directly you never have to wait too long before being sent into a match. The lobby system does an excellent job of letting you know how other matches are playing out with visible timers and health bars. And if you are particularly impatient, you can quickly hop into Warm-up match against training bots in order to test out your ARMS. 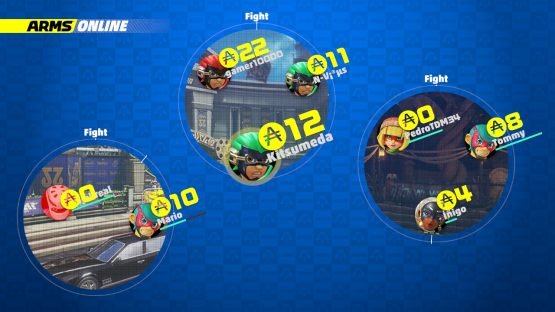 The plethora of match types which are on random rotation keep things fresh. Aside from the typical 1v1, you can play 2v2 where you are tethered to your ally preventing you from spreading out too far. Then you have a free for all, which usually ends with players ganging up against a single person. To spice things up a bit you will also periodically have volleyball, as well as basketball matches where you score points by throwing the opponent through a hoop.

ARMS looks absolutely stunning both in docked and handheld mode. The bright and colorful visuals scream Nintendo. Everything from the character design to the unbelievable animations make this one of the prettiest games out there. Even the menus look super-stylish like something plucked out from a Persona game, while the catchy title theme will have you humming the game far longer than you’d want to. 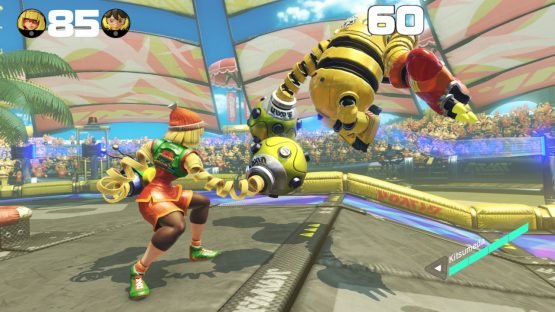 Since the Switch’s launch, Nintendo has been showering us with an excellent new game every month and ARMS is no exception. Its tactical but accessible gameplay offers something for both the players seeking a challenge and those just looking for a bit of fun with friends. The plentiful online modes and equally impressive offline multiplayer mean this is one game you will be coming back to for a very long time. Now just don’t forget to bring us LEGS Nintendo.