We’ve talked about Bloodstained: Ritual of the Night as one of the most successful Kickstarters last year. In December we saw the first screenshots, where IGA and his team polled the fans about which shader should be used for the game. And now in March we get a teaser video showcasing the shader, chosen by backer votes.

For the teaser developers chose to showcase Miriam’s model, showing her off in all her 3D glory. We can now clearly see that the rose design on her back is in fact a protruding crystal, and not some fancy tattoo design. Enjoy the 360 video of Miriam below.

Here is what IGA has to say about the design.

Like the shader poll results, we’ve decided on Character Shader 3 / Background Shader 3. Since the new character shader was so well received, we’ve also made a video of Miriam’s 3D model, reflecting some of the most recent changes we’ve made. We thought cosplayers would especially like to see the back view of her design. The camera is the only thing that moves in the first half of the video; in the second, we’ve demonstrated the shader effect by moving the light source, as well. Please enjoy. 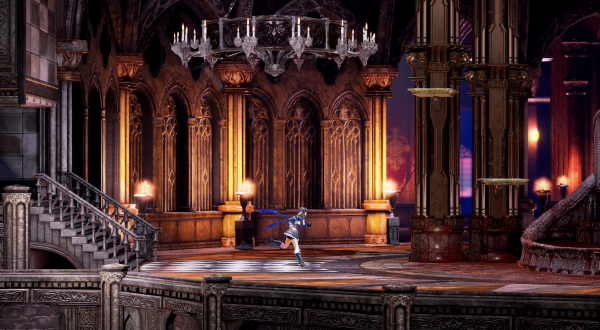 It’s great when developers get more involved with their fan base and give actual thought about all those people that support them. Maybe that is why IGA is so popular with the fans. Tell us what you think about the chosen design in the comment section below.

Aggelos Out Now on PlayStation 4 and Xbox One

New Bloodstained: Ritual of the Night Character Revealed Ahead Of Release
Related Products from our Store: