With the game due out this year, and revealed earlier this week – We’ve got some first look Captain Tsubasa Rise of New Champions gameplay here of an entire match, and we got to sit down and get hands on with the game to really figure out how it works.

This is a true 11v11 anime football game. You may be used to PES and FIFA, but Captain Tsubasa leans more towards Super Mario Strikers than a traditional football game, it’s not trying to be accurate with it’s physics. This is highlighted by the fact you can comfortably score from about 40 yards out, with anime cutscene super-moves. On first impressions, the game obviously isn’t as smooth to control as the traditional football games, and the animations aren’t quite as easy to transition from one stance to another. The game isn’t trying to be that though, you can expect overly-exaggerated animations on tackles, sprints, dribbles and shots.

A match is fast paced, and you’ll find yourself running up and down the pitch often, there’s no such thing as controlled build-up play in Captain Tsubasa Rise of New Champions. The aim here is to get the ball up the pitch to your strikers as soon as possible, as they possess the ability to pull off these super-shots, which increase your chance of scoring dramatically. 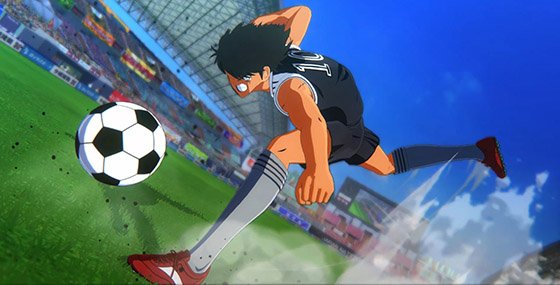 Some players will have individual traits which will improve a certain aspect of their game, one player may be great at dribbling on the wing, one player may be an absolute giant who can tackle for days, and one may have an incredible shot on them. It’s important to control the right player in the right situation, and you can change players with the L1 button, just like FIFA.

As someone who has fallen out of love with the classic football games, I found myself enthralled with Captain Tsubasa Rise of New Champions. I’m certainly intrigued to see the depth of the game when it comes to different player traits and playstyles. It’s great for someone to try a new take on a tired genre, and obviously, if you insert anime into any genre, we’ll be on board.

I can’t wait to play more of Captain Tsubasa, and I’ll be sure to keep you up to date on all the latest! If you have any questions about the game, I’ll answer what I can in the comments below or on socials!

Thanks to Bandai Namco UK.

Join the discussion on this anime football game:

Will you be hitting the pitch?