Winter may be coming to a close, but second fandisc Code: Realize ~Wintertide Miracles~ provides endearing bonus fluffy bonus stories filled with beautiful CGs and cheer for Code: Realize fans who just can’t get enough. Available on both PS4 and PS Vita, Wintertide Miracles can happily take its place with the other Code: Realize games and having all of them available side by side in English is a pleasure of its own.

With many shorter stories rather than one chief long one, similar to the previous fandisc, Wintertide Miracles is divided neatly into separate sections you can easily navigate between using the game’s adorable Christmas tree menu. In fact, “adorable” and “Christmas” are two good descriptors for Wintertide Miracles overall, as it offers both cuteness and festivity in spades, as well as plenty of opportunities to see the characters interact without the fears of bioterrorism and flesh-melting poison hanging over them.

New to Wintertide Miracles are Triangle Dates, which let you experience a brief scene with Cardia and two other main characters. You can pick and choose combos you want to see interact together from Lupin’s crew, and  some side characters get scenes too which are some odd but interesting additions. For all Future Blessings and Wintertide Miracles‘ work integrating them into the main cast, however, Sholmés and Finis are left out of any Triangle Dates, which is a bit of a shame. Even Sisi the dog gets to be in one, but not them. Hm.

That aside, the Triangle Dates provide lovely snippets of extra banter between characters on their down time. From shopping for clothes with Victor and Saint-Germain to Van Helsing and Impey tending to an ill Cardia, it’s nice to see everyone’s lighter sides as a focus and experience the simple pleasures of Cardia and the guys just hanging out. Cardia herself continues to be a splendid character too, and seeing how far she’s come into her own by this point is delightful.

It’s nice to see everyone’s lighter sides as a focus.

When you just want to settle down with a love interest of your choice, the Alternate Stories are there to provide. Each of the main 5 gentlemen gets a Christmastime story taking place after Finis’s route in Future Blessings, where they have the opportunity to confess to Cardia all over again against a backdrop of snow and bright decorations.

This is a good thing, seeing as the previous confessions from Future Blessings have kinda been written out of continuity and all, and these professions of love are just as sweet. As one of the game’s main events, the Alternate Stories are a fair amount longer than the Triangle Dates, but are a good length to build up the emotion without getting too cloying.

Cardia is quite possibly my overall otome Best Girl.

Finis and Sholmés don’t get Alternate Stories, but instead get proper Epilogues to round off their routes introduced in Future Blessings, Wintertide Miracles being to their new routes what Future Blessings was to the main routes of Guardian of Rebirth. It’s nice to have extra time to wrap their stories up, and Finis and Cardia’s relationship is so heartwarming!

These direct continuations of Future Blessings aside, given that even the extra chapters for the main 5 love interests completely forgo anything established in their routes or epilogues in Future Blessings in favour of continuing on from the end of the Finis route, you’re likely to be well and truly lost if you haven’t played Future Blessings first. But then, Wintertide Miracles is a fandisc – accessibility isn’t its selling point – and with that in mind it’s a pleasant supplement to the previous games for returning players. 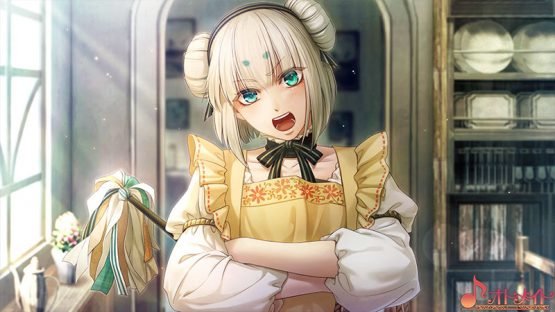 While their designs are very nice, the new characters lack much of the appeal of the old ones and their predictable plot line doesn’t do them any favours. The translation isn’t as polished throughout this story as in the rest of the game either, which only makes it more of a drag to read. While it is but a portion of what Wintertide Miracles has to offer, Cantarella’s side story is a weak spot in an otherwise fairly solid game, and that’s kind of disappointing.

Both of these characters deserved better.

Cantarella’s side story is a weak spot in an otherwise fairly solid game.

A sweet, festive dose of Cardia and the gang for established Code: Realize fans.

Wintertide Miracles may pale somewhat in comparison to the other titles, lacking the drama and intrigue which made them quite so strong, but, as always with Code: Realize, the game is gorgeously illustrated, with superb voice acting and an English translation that admirably encapsulates the game’s Steampunk Victorian setting. It certainly lives up to both Guardian of Rebirth and Future Blessings in flavour, if not so much in substance.

One Piece Stampede Review
Recommended Products from our Store: