Continuing our noble tradition of being arguably addicted to mobile titles, Mikage has announced Criminal Girls X, the 10th anniversary project for the 2010-launched RPG series. This  will be released for smartphones and PC in Japan.

In the west, where it is currently undecided whether it be released under the Criminal Girls name, platforms have yet to be confirmed, but Mikage told Gematsu it would like to release the game on other platforms such as PlayStation 4. Gematsu, in fact, is cooperating with Mikage to translate game-related media and promotional information for Criminal Girls X and more information is planned for release on April 26 2019.

There is a teaser website that features the main heroine (voiced by Chiwa Saitou) holding a mugshot board, as well as the protagonist cat (voiced by Yuuichirou Umehara) in the title logo, and also a first trailer is already up for the game too, which we have linked just below.

The Story of Criminal Girls X

Criminal Girls X is being produced around the theme of “pure love.” The heroine, the protagonist’s fiancee, is dragged into a mysterious incident and loses her life as a result. After living a full life in order to rescue his beloved, the protagonist prays to God. In that moment he learns the truth, that his fiancee’s soul has descended to Asura, the domain on the brink of hell. The protagonist awakens in the form of a cat, surrounded by a group of 24 young women.

Mikage have also simultaneously announced a a followers-only campaign, hosting a giveaway for users who follow the official Twitter account during the campaign period of February 9 to April 26 JST. 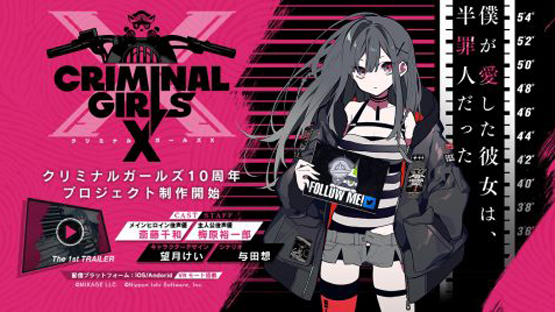 The official Twitter count will be updated every so often with information on limited projects and development journals. Criminal Girls X, compatible with VR, is confirmed to have character designs by Kei Mochizuki and Scenario by Sou Yoda, and currently does not have a release date.

Are you interested? Let us know in the comments, or in Twitter and Facebook, and check back for more information about this and cover of other Japanese titles.