We can finally take a look at DARIUSBURST Chronicle Saviours, a latest installment in Darius series of arcade shmup shooters that was released on Steam and PS4 and Vita this December.

Dariusburst was first released on the PSP in 2009. Subsequently, there was an Arcade release. After the streamlined iOS version, this is the first time we can play Dariusburst in the form of Dariusburst Chronicle Saviours, an enchanced version on Steam, PS4 and Vita.

Darius has a long history, starting in 1988 when the first Arcade title was released. Though a bit generic in it’s visuals and premise, it managed to wow the audiences with its impressive triple monitor display setup, not to mention its characteristic mechanical giant sea monster bosses.

Not only was Darius popular in the arcades, but it also saw some great releases on the home consoles as well, like Darius Twin and Darius Force on the SNES. But it was not until Darius had some awesome additions to the gameplay like the black hole in Darius Gaiden and G-Darius that the franchise was perfected.

The Arcade Mode includes a choice between the Original and the EX mode which is a hard core mode for those that like the additional challenge. Original mode consists of stages arranged in a classic Darius setup where you can chose where to go next. The lower the level, the harder the difficulty. You can choose between 9 playable ships including the iconic Silver Hawk variants from classic Darius games and an exclusive ship.

There is and additional Chronicle Mode with a great deal of stages and different missions. The idea behind this mode is to liberate a selected star system, where you could potentially compete against other players on who can beat the most systems. It is a fine idea, but each player is set to some random virtual cabinet and this is where this whole concept falls flat. You can change your appointed cabinet at any time and can’t really see which players are on a selected cabinet.

CS or Chronicle Saviour Mode is a new single player campaign. It is almost like a different game all by itself and lets you progress through stages in a linear form. It features bite sized levels that can be finished in under 5 minutes. It is an interesting addition, but I far preferred Arcade Mode, where you can select the ship you want from the start and where levels are a bit longer.

Dariusburst Chronicle Saviours is best played in a glorious dual monitor setup. It gives it a true arcade like experience and once you start playing it this way you won’t be coming back to only a single screen. Though, the only downside is that if you don’t have identical monitors the resolution will be calculated according to the largest one so the picture on the smaller screen will be cut. 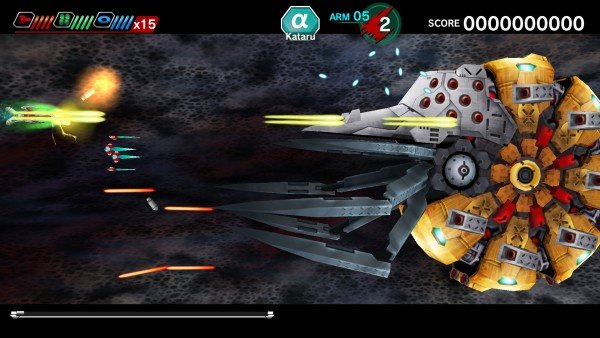 The game features an excellent soundtrack from Zuntata with classic tracks along with some additions. It certainly gives Darius Chronicle Saviours its familiar flair and has a bit of everything for anyone, from the expected techno tracks to haunting tracks with unsettling female wailing and tracks with Spanish vibes that feature trumpets.

While the Arade Mode can be great fun, especially if you want to play with a friend, the CS mode can get a bit too repetitive as you will be fighting the same enemies and bosses many times. Bosses can sometimes change their attack patterns or have a bit of variation in their appearance, but when you have beaten them a few times it can get stale. This is especially apparent as the locales in the game aren’t really that distinguishable from each other.

I found it strange that the in-game instructions before starting the Arcade Mode aren’t translated to English. And while the game features some cool mechanics like the counter burst mechanic where you can dispel enemy lasers the game doesn’t feature any sort of guide to explain how all this works.

I would recommend this game for die hard fans of Darius, but for those that are curious I suggest that they wait until the game is on sale as the asking price on Steam is a tad steep.

DARIUSBURST Chronicle Saviours is available on Steam, Vita and PS4.