Dragon Ball FighterZ getting three free updates (including a festive one)!

It is pretty obvious to most that Dragon Ball FighterZ is the biggest fighting game in the world right now, with phenomenally attended tournaments and some of the most hype matches in the FGC today. It’s continued popularity, however, would rely on consistent support from Bandai Namco to make sure that the game remained fresh.

To that end, Bandai Namco Entertainment Europe announced a selection of new content, as part of 3 free updates for Dragon Ball FighterZ . The first is a FighterZ Tournament, which is a new online tournament mode featuring several new match rules culminating in a final 8-player bracket. The winners and runners-up in each tournament will receive special rewards and Z Trophies, which players can then display in their all-new Z Trophy Room.

The above-mentioned Z Trophy Room is the second new feature, where rooms are unique to each player. Players will gain Z Trophies that can be showcased in their Z Trophy Rooms, as well as with their Lobby Avatars and more. Players can then visit the Z Trophy Rooms of others or invite their friends to show off their own collections. This and the FighterZ Tournament will be live today! 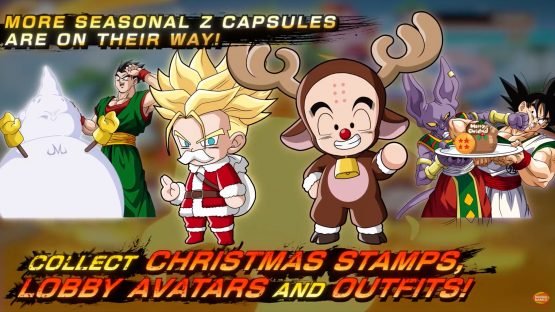 The third update, arriving on 5th December, 2018, will feature a variety of new festive themed avatars and colour variations. Characters including Vegeta, Trunks, Tien and Android 18 will have Santa Claus themed avatars, with Krillin and Buu dressed as a reindeer and snowman respectively. A new Christmas colour set, featuring red, green and gold, will also be available for all characters.

Dragon Ball FighterZ is out now on Playstation 4, Xbox One, Nintendo Switch and PC! Did you pick the game up? Are you still playing the 3-on-3 fighter? Are you looking forward to these new features? Let us know in the comments, or on Twitter, and check back for more coverage of fighting games and other Japanese titles.