Square Enix has announced the Dragon Quest Switch ports of the first three games in the series that were previously announced for Japan will also be coming west! They’ll be sharing the same release date of September 27th too, which is nice to hear!

It’s great to have these three classics coming to Switch! They’re amazingly cheap too, with the first Dragon Quest at $4.99, Dragon Quest II: Luminaries of the Legendary Line at $6.49, and Dragon Quest III: The Seeds of Salvation at $12.49.

While the games will only be available digitally via the Nintendo eShop in North America and Europe, a physical collection including all three Dragon Quest Switch ports will be releasing in Asia in October and features English subtitles, alongside Chinese and Korean. 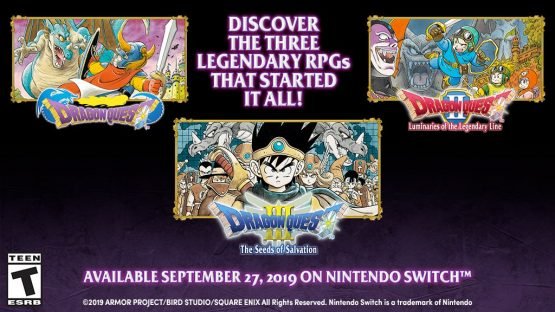 Dragon Quest I, II, and III release on Nintendo Switch in North America and Europe, as well as Japan, on September 27th.