Being quite the fans of the fantasy genre, it’s with excitement that we approached this Dragon’s Dogma: Dark Arisen review. A Switch port of an enhanced version of a Playstation 3 era title, this game really needed to be special to prove it was still relevant in today’s market.

The story of Dragon’s Dogma: Dark Arisen could not be more textbook fantasy if it were written by J.R.R. Tolkien, which obviously is no bad thing. Your character, the Arisen, has somehow survived his heart being consumed by a dragon, marking him as some kind of chosen one in the world of Gransys – despite your character being quite weak in game (initially).

Leaving the coastal home you begin in, you embark on a quest to save the world, enlisting the aid of “Pawns”, a kind of warrior from another world, to support you in battle as you journey and aim to prove yourself to be the hero that some already believe you to be. It is just missing a powerful macguffin and a little gremlin guide to complete fantasy trope bingo. 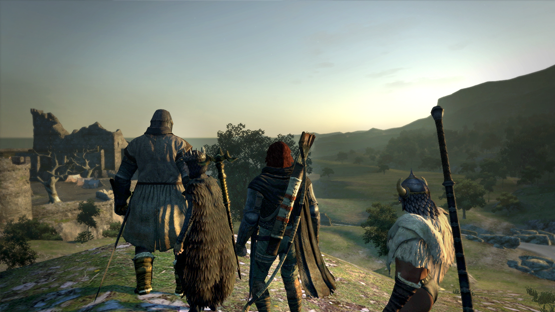 Your first port of call, after gaining the notice of a unknown soldier called Mercedes Marten is to journey to the capital city of Gran Soren to deliver to Duke Edmun the head of the Hydra that you had previously slain. Once in the city, the story begins to kick off in earnest, along with the various side plots and stories you can find beginning to seep in and enrich the world.

The moment-to-moment gameplay involves exploring the huge game world, getting into scrapes, taking down monsters, running amok around cities and towns, and completing various quests. All the while, you’re levelling up yourself and your comrades, deepening your understanding of the vocations (Job roles) and becoming stronger. 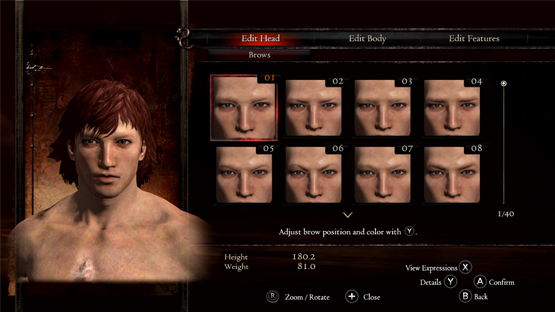 Your basic moveset comprises of a light attack, heavy attack and then a set of special attacks that can be changed and upgraded. With the Mage, for instance, your light attack will be a weak spell, your heavy a swing of your cane, and the specials a variety of spells. Each vocation has different attacks so allow a lot of player experimentation.

The unique power of the Arisen (i.e. you) is that you have the ability to summon “Pawns” to join you. You have a main Pawn that you can create from the ground up, and others that you can summon at random. These will join you constantly on your adventure as a party of sorts, giving pointers at how to proceed, attacking enemies, and even healing you. 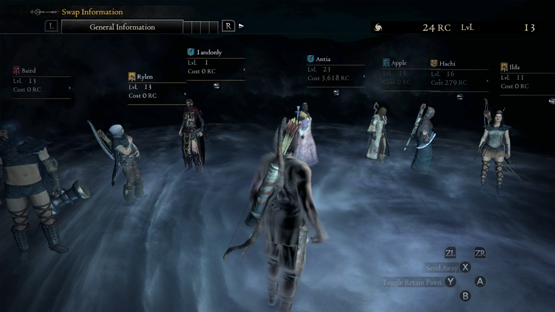 Pawns will also level up during combat, and can have their abilities and powers augmented an upgraded by the player at certain vendors in cities and settlements throughout the world. As such, it’s best to try to have a party that best covers what a party might need – we personally chose a mage as our class and supported ourselves with a knight, for instance.

These will be controlled by A.I., with the player being able to execute certain commands with the D-Pad, telling them to “Go”, “Come”, and “Help”. These might sound a little restrictive, but rest assured that these are the only directions they need. The Pawns are incredibly effective, with decent combat and defensive ability – we just wish they occasionally shut up. 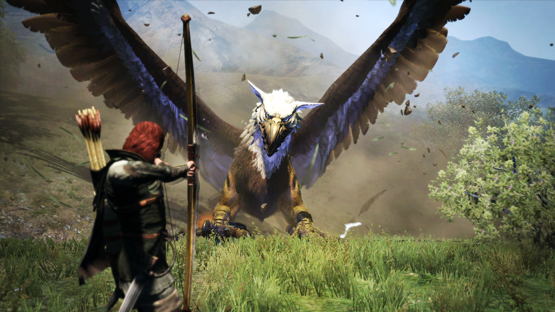 The unique feel to the game doesn’t end with the Pawn mechanic, as Dragon’s Dogma: Dark Arisen has other mechanics that are unique to the genre (at least for the time). Mainly, the grab mechanic, which can be seen far better in encounters against larger enemies than smaller, but can be used against almost every enemy in the game.

When using the grab, the player and their Pawns can hold onto smaller enemies to have another strike them, or to climb larger enemies. This removes the classic killing of giant beasts by hacking at their shins like other games and brings the feel closer to that of Shadow of the Colossus. This is when it works effectively, but that is unfortunately a problem here. 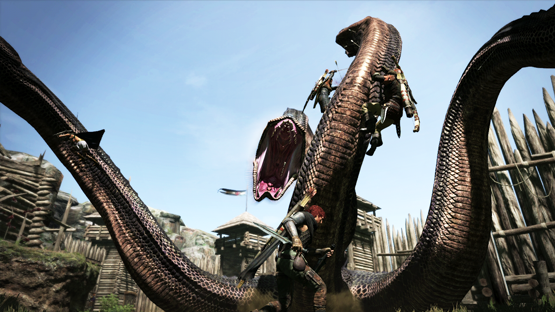 The whole game is incredibly rough around the edges in its gameplay with constant frame drops, inconsistent enemy lock on ability, input delay, and a wildly misbehaving camera. Coupled with the levels of jank in the game in general expected with its age makes playing the game inconsistent at best, or just simply unenjoyable at worst.

We can overlook some of this as this is essentially a port of an upgraded Playstation 3 title, but these are issues that really should have been sorted by now. A lot of games now have overcome these issues since the late 2000s, and it just leaves Dragon’s Dogma: Dark Arisen feeling like a relic when played in the modern era of consoles. 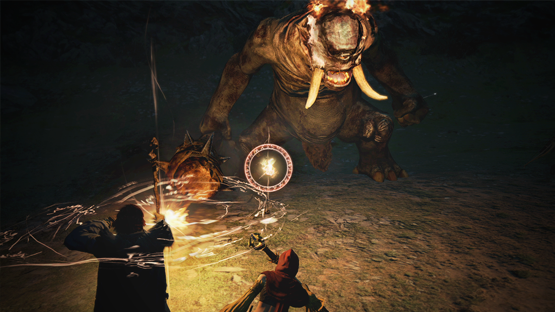 This roughness, also, is reflected in the fact that the game just doesn’t look that great on Switch. We can’t speak for the other platforms, but this version of the title looks like the game it begun as, a PS3 era title. The characters look oddly uncanny valley, the pop up of textures and scenery is painfully noticeable, and the effects on the attacks look lacklustre too.

Sound design of the game also falls down in this area, with dampened sound effects on the attacks and spells and an incredibly generic fantasy musical score. This being said, the vocal performances on the voice acting throughout the game is stellar, perfecting fitting the world you’re in and also giving a large amount of weight to the events occurring. 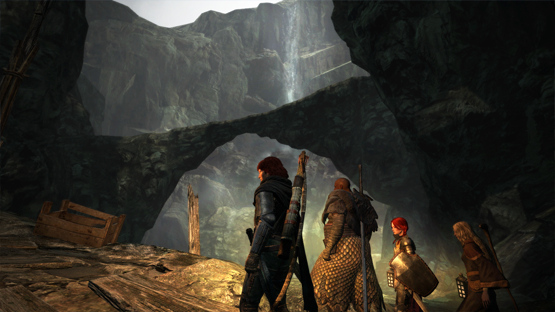 There is a lot here to love, especially for those that are fans of the fantasy genre, and like their gameplay a little more flexible. If you can look past the colossal amount of jank, there’s some interesting ideas and mechanics going on here. The Pawns are some of the best ally A.I. we’ve seen, and the grab mechanic can really change battles up.

Ultimately, however, the feeling we’re left with is one of disappointment. For all of the unique features, Dragon’s Dogma: Dark Arisen fails to mark itself out as different enough from the sources from which it heavily borrows. It’s an enjoyable fantasy adventure, sure, but lacks the required originality to truly stand out from the crowd.

Dragon’s Dogma: Dark Arisen is out now for Nintendo Switch, Playstation 4, Xbox One and PC. Why not pick up a copy? EU/US