Whew, there’s a lot to take in here! Thanks to Twitter user 黒凧 BlackKite‏ and the dedicated fans at Serenes Forest for providing some translations.

Archbishop of the Church of Seiros, Rhea 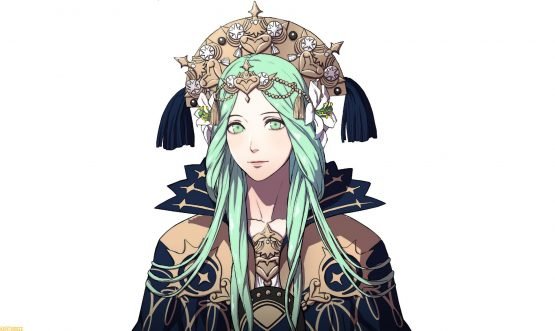 The high leader of the Church of Seiros who invited the protagonist to the monastery. Although she has a kind, motherly heart and a gentle disposition, she also has a strict side and is unrelenting when it comes to punishing those who defy the church. 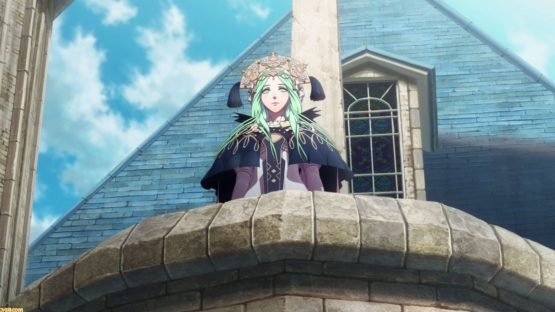 Some characters have Crests in their bodies, passed down from their ancestors. Crests are given much significance and can greatly influence inheritance, such as the throne of the Adrestian Empire being passed down to the bearer of the Crest of Seiros. Additionally, Crests can manifest as talent, such as great magical technique or physical ability.

The protagonist has a Crest, but what it is remains a mystery. 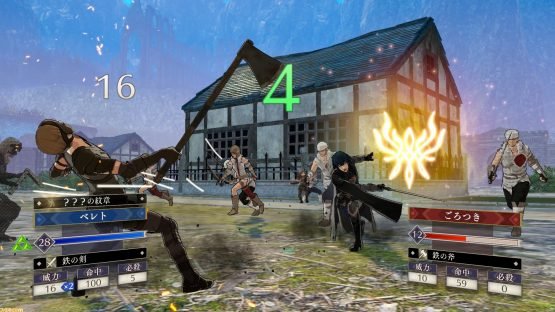 In this game, Skills are an important factor in the uniqueness and development of units. You’ll be able to feel the effect of the Skills you set in battle, and they come in three types. As well as Crests, make sure to check a character’s Personal Skills. Using Skills well is the key to victory.

Personal Skills – Inherent skills unique to a character that are available from the beginning. You cannot swap or change them and they have unique abilities.

Class Skills – Skills related to a Class, which are only available when a character is in the Class.

Ability Skills – Skills that are learned based on a unit’s Ability Level. Unlike Class Skills, these Skills carry over to any Class once learned.

Individual Skills and Crests of the Main Characters

Crest: Minor Crest of Bladud, one of Fodlan’s Ten Heroes

Crest: Minor Crest of Regan, one of Fodlan’s Ten Heroes

Friends Who Learn Together 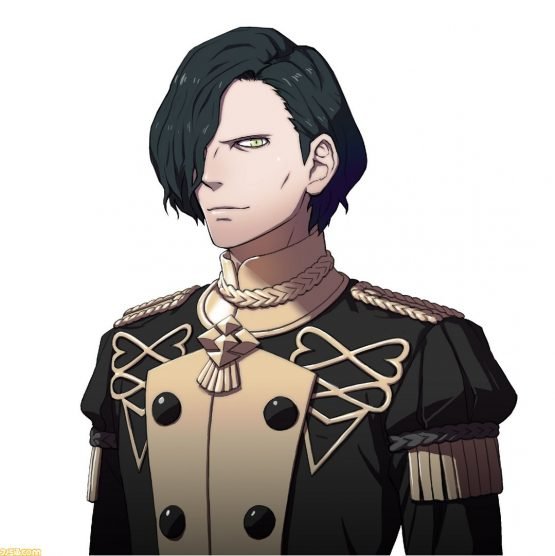 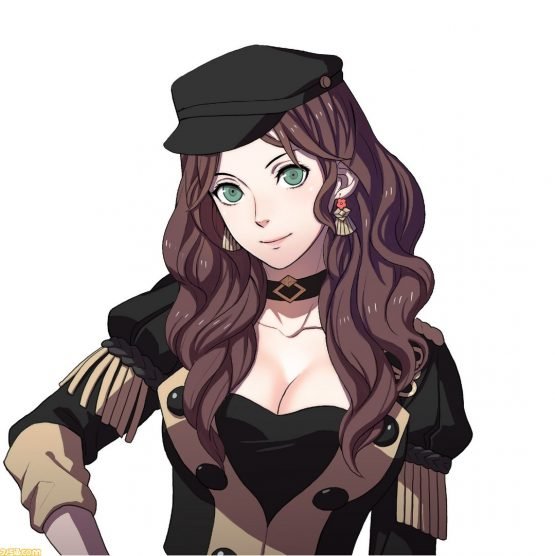 Personal Skill: Songstress – Adjacent allies heal 10% of their HP at the start of a turn 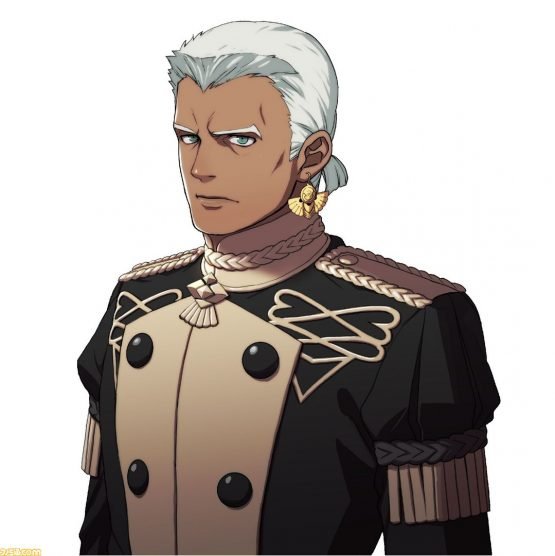 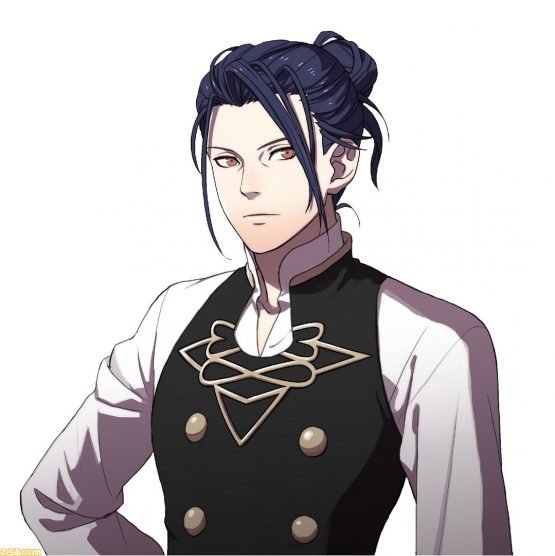 Personal Skill: Lone Wolf – Deals +5 damage if unit does not have Knights following them, or if their Knights have have no strength remaining 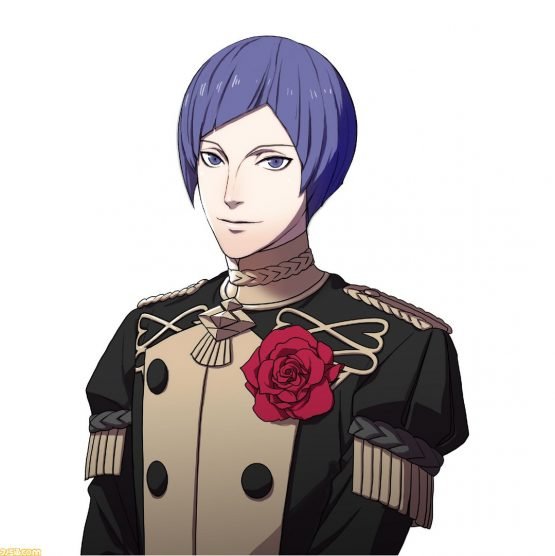 Crest: Minor Crest of Gloucester, one of Fodlan’s Ten Heroes 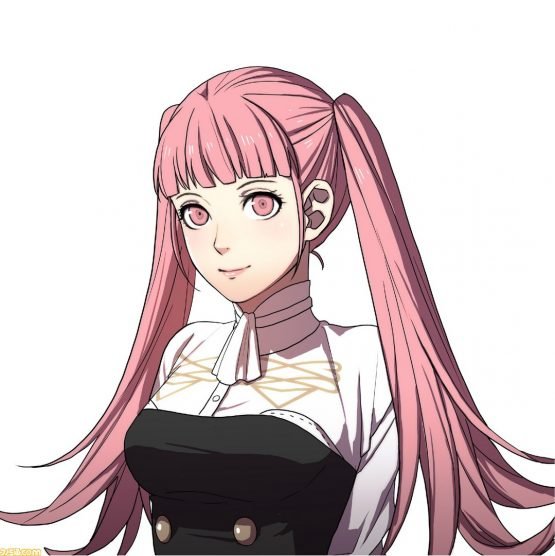 Crest: Minor Crest of Goneril, one of Fodlan’s Ten Heroes 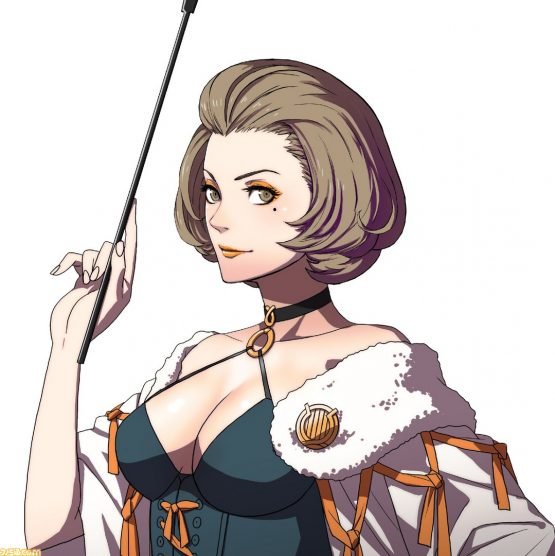 School teacher and doctor. In the past, she was the star of an opera company. 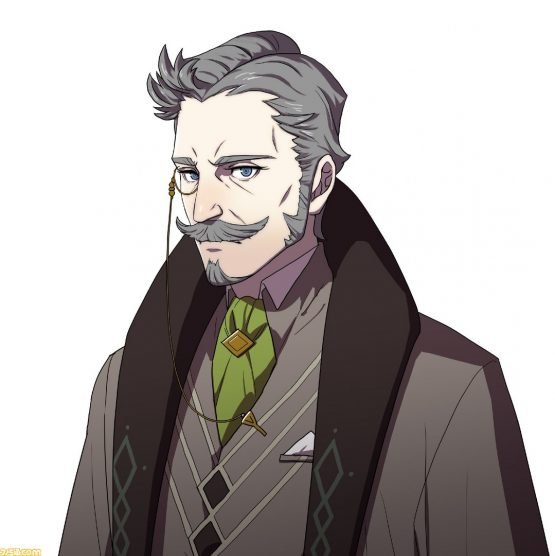 Scholar and teacher who studies the powers of heraldry. He tends to get excited when it comes to the Crests.

Hire Knights and Take Over the Battlefield 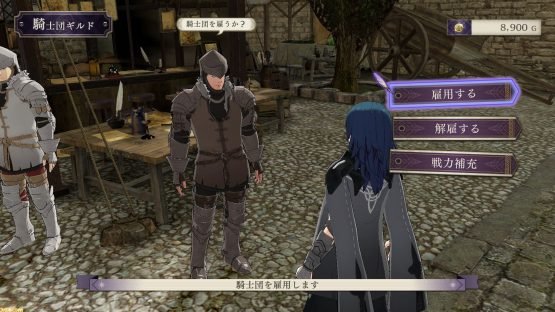 Unlike in many games, battles in Three Houses are are large and involve many against many. You can recruit Knigts from the Knights Guild who will accompany units in battle. 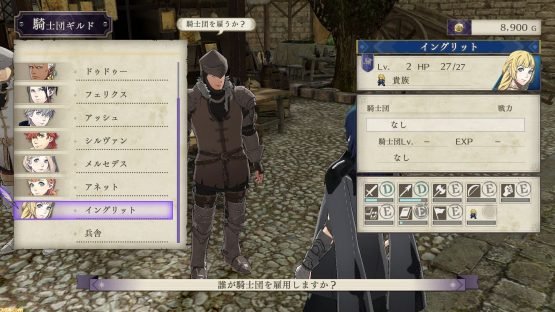 You can select the type of class for them (Mages, Pegasus Knights, etc.) and they have their own levels. If you lose them, you must refill them at the Guild. By raising a unit’s Command Skill, you can deploy stronger Knights and learn useful battlefield skills. 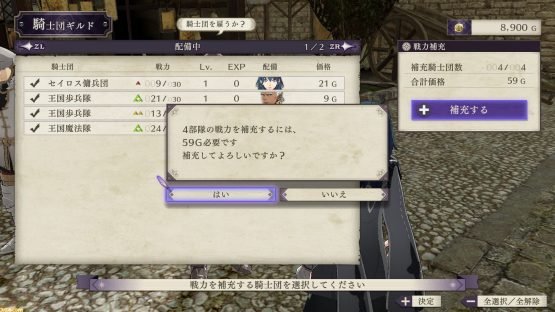 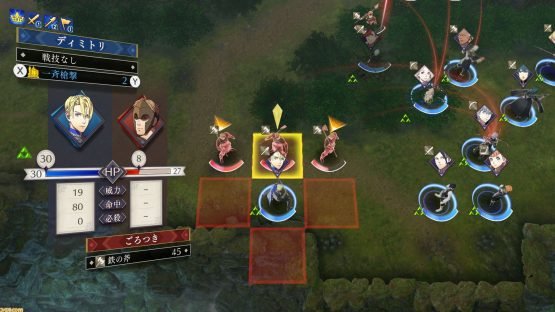 A new feature called Strategems can be used by a unit who has Knights under them. These have a limited usage per battle, but do not consume items. Types include simultaneous strike, raising movement speed, or even forcing an enemy unit to move. 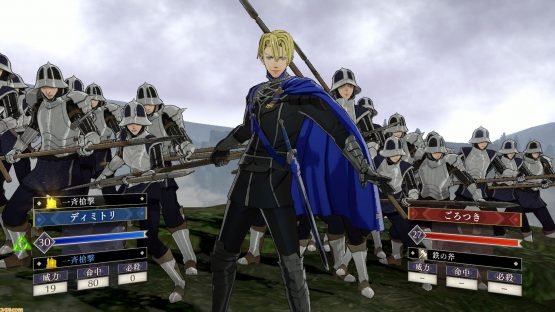 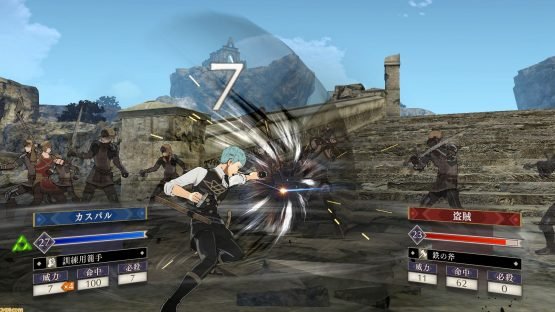 A new type of weapon is introduced in Three Houses, which is the gauntlet, available under the Martial Arts ability level. The gauntlet lets a unit attack twice, or even four times if the unit’s attack speed is high enough (similar to Brave weapons in previous games). Gauntlets cannot be used by mounted units. 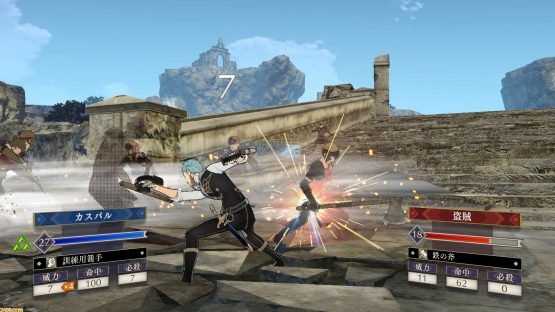 We get a little look at some of the Classes units can become when they pass a test. Fist Fighter and Dark Mage are listed as male-only classes, bizarrely, so we’ll have to wait and see where this balances out in the future. 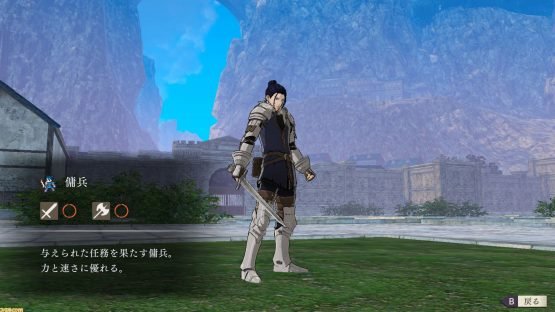 A soldier who excels in attack power and speed. Sword and armour skills are easy to develop. 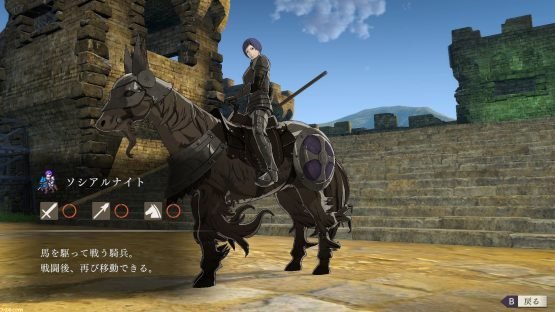 A balanced unit in terms of attack and movement.

Skill: Canto – Can move after action if there are remaining move points. 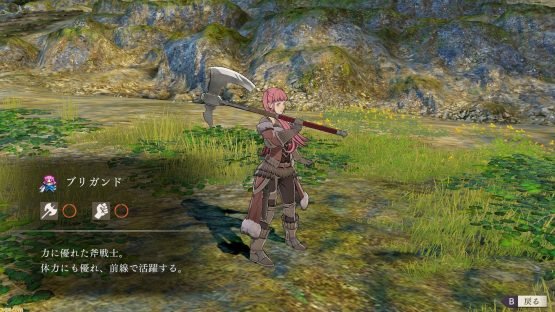 HP and attack parameters are high. As well as axes, they’re excellent in handling gauntlets. 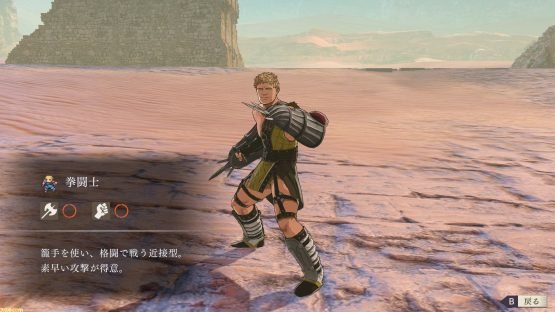 Skill: Bare-hand fighting – Still able to fight when not equipped with a weapon. 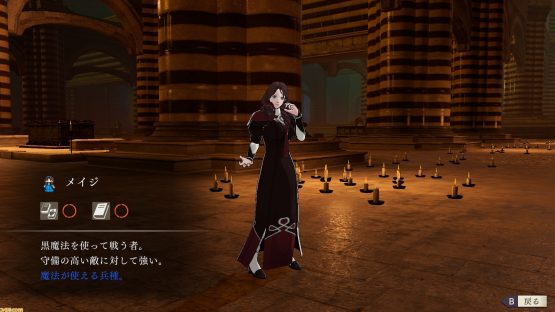 A magic-using unit good against enemies with high defence.

Skill: Fire – Can use Fire magic. Depending on level, you can double the number of times you can use it. 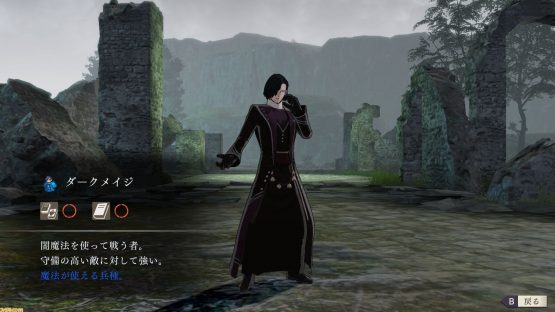 Skill: Dark – Can use Dark magic. Depending on level, you can double the number of times you can use it. 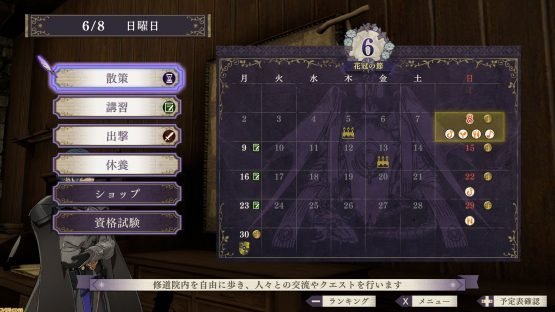 Gameplay is divided into Combat parts and Officers’ Academy parts. During the latter, you can interact with students, as well as improve their abilities. Check the calendar and plan out your days.

In Fodlan, a year is split into 12 seasons (months), much like in our world. Each season is a chapter in the story, and, after going through the weekdays and weekends, you’ll have to complete a major battle at the end of the season to progress. 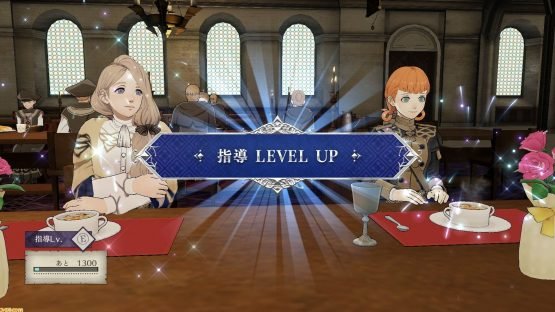 While weekdays are used for teaching, you can do more free activities on weekends. There are also various events, such as festivals and characters’ birthdays (Edelgard’s is June 22nd). As your Teaching Level improves, the number of actions you can do will also increase. 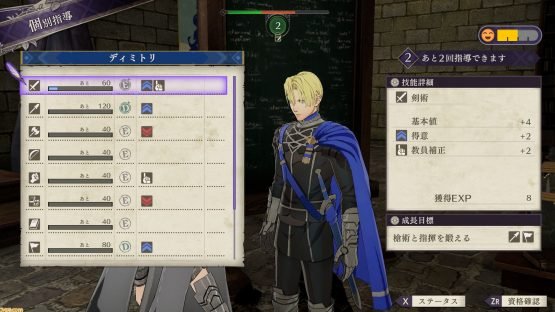 Students’ abilities can be improved through education. This can be done automatically, but by adapting to each student’s characteristics you can teach them your own way. To stand against enemies who get stronger each chapter, the bond between the protagonist and the students is crucial. Get closer to your students, and support them in their studies. 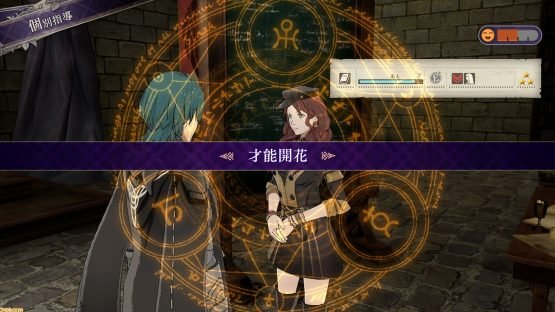 You’ll be able to teach a certain number of students per session, and each student’s motivation affects how many times they can be taught in a session. Students will have particular areas of study that they excel or struggle at, marked by arrows. You can improve something a character doesn’t excel at by continuing to tutor them in that area and new skills can be learned from this.

You can set objectives for students to work on by themselves. Sometimes, a student will have their own suggestion for what these objectives should be. 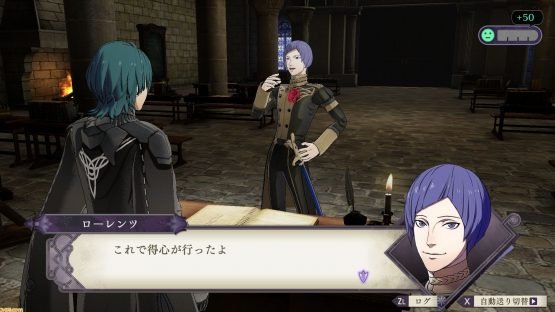 There are two ways to increase a character’s motivation. The first is that they will ask you a question and you must give the correct answer. The second is choosing the correct action (Praise/Scold/Comfort) after good or bad Tutoring results. There are four possible outcomes for Tutoring, and these affect the amount of EXP gained. 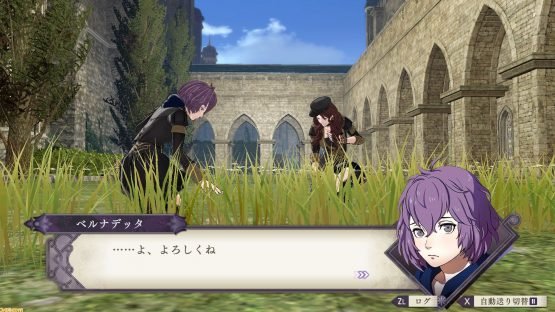 Each week, you can assign two students are given a Group Task. The assignment will increase ability levels corresponding to the task, as well as increase the bond between the students involved. You can also gain money and materials from these tasks.