XSEED has announced that Fate/Extella Link will be coming to PS4 and Vita in the West early next year, and that there will be a collector’s edition exclusive to PS4. The game was initially slated to release this Winter, and while it may be delayed, at least the Vita version is still on its way!

You can check out the Fleeting Glory collector’s edition below! 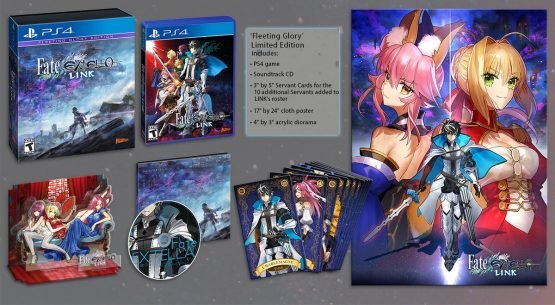 Included is a soundtrack CD, 10 3×5 inch collectible cards featuring Servants from the game, a 17×24 inch cloth poster, a 3×4.5 inch diorama featuring Nero, Scathach and Drake, and a box to house it all. A lot of things to display! The Fleeting Glory collector’s edition costs $79.99, while the standard versions cost $49.99 and $39.99 on PS4 and Vita respectively.

Fate/Extella Link releases on PS4 and Vita in the West early next year.