I was not five minutes in Gal Gun 2 and I was already being literally thrown to the ground while a girl straddled me, and a bunch of others watched dreamy-eyed at the scene. I didn’t know whether to be aroused or petrified. Either way, the game had me hooked since then. 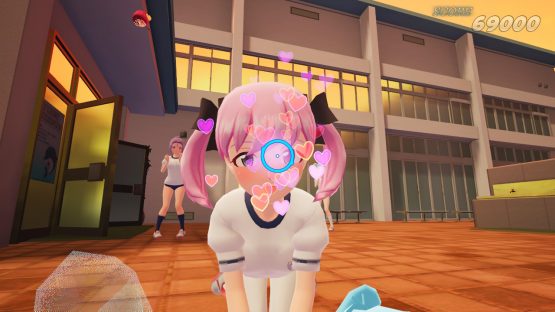 In Gal Gun 2 you take the role of a nameless typical high school protagonist. One day after school you find a mysterious box on your table containing weird goggles and a silly plastic gun. After putting on the headset you meet Risu, an angel from the Angel Ring Company.

You learn that you have been chosen to slay demons by shooting and sucking them up with the Demon Sweeper. Unfortunately, the only way to see the foul chibi demons is to wear the Pheromone Googles which has a side-effect of making its wearer a natural chic magnet. You must now both capture demons and fend off the onslaught of girls, by shooting them until they reach euphoria. 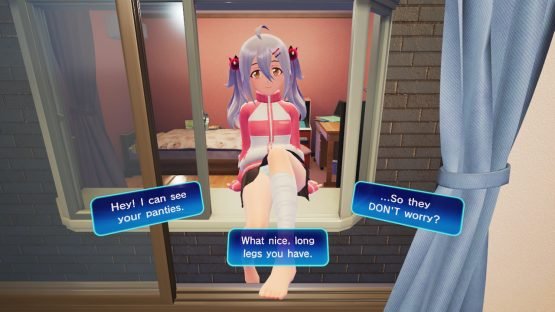 Gal Gun is an on-rails shooter not unlike the light gun games of the past. You will be hopping from spot to spot blasting away at cute school girls coming all around you with your Pheromone shot.

My advice for anyone playing is to first open up Options, go into Game settings and set the Motion Controls to ON instead of the default Zoom only option, and also tweak the sight sensitivity to 1. While the game is perfectly playable with the default analog controls, playing it with motion controls is a whole different experience. What once required slow calculated pushes of the analog stick can now be done by simply moving your controller. The unbelievably precise and fast targeting mimics the precision we once had in light gun arcades of yore. Targeting specific body parts, firing off a Pheromone shot and quickly aiming at another girl quickly feels like second nature. The controls are in fact so good that I was genuinely baffled that it isn’t the standard control option for so many other shooter games out there. 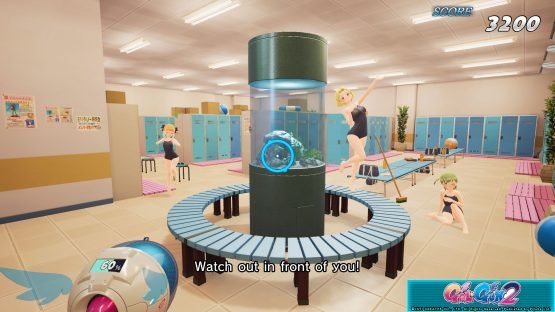 What makes Gal Gun 2 shine is the fact that you never feel tied down. You can zoom in, crouch, stand up higher, and peek left or right in order to get a better view of an obstacle. You are frequently offered to choose which way you want to go down as you cover various locations through the giant school grounds.

And it is not just point-and-shoot either, as the game offers some really dynamic gameplay. Each girl has a specific weak point, which if hit can bring her to ecstasy in one shot. Girls also send flying letters your way by screaming phrases such as “I love you” and “I am watching you”, forcing you to shoot those characters before they hit you. 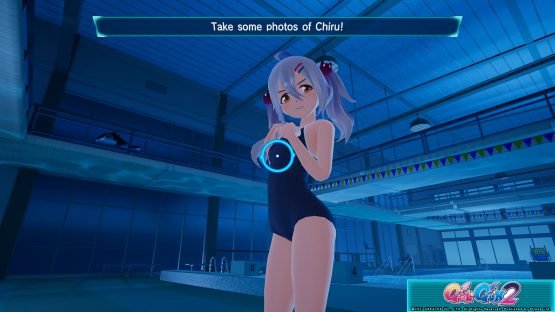 You don’t have to tell me twice

Mini-demons change things up a bit. These tiny chibi demons latch onto girls making them much more aggressive and impervious to your pheromone shot. You will have to knock them off one by one in order to make the girl vulnerable again. You will have to quickly take care of these removed demons before they find a new host by either finishing them off with another well-placed shot or sucking them up using your Demon Sweeper.

As you complete missions you will earn points. You have a limited amount of days to earn enough points in order to progress with the story. It’s up to you to choose which mission you want to tackle, by selecting from a list of requests you get from the girls at school. 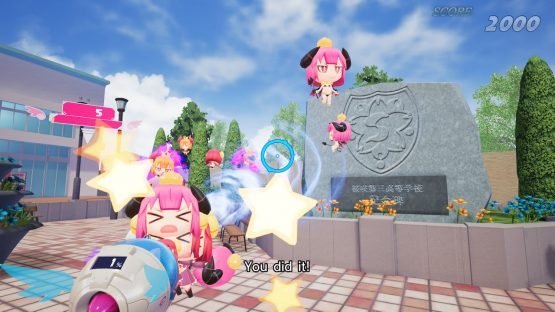 Things can quickly get overwhelming fast

Aside from your standard on-rail missions, defense missions have you protecting girls by taking out mini-demons before they deplete the HP of the girls you are guarding. You are usually forced to defend a couple of girls at once, so you will have to jump into different positions in order to be effective. Sometimes the sly little buggers will latch onto the girls at such an angle that finding them requires you to really be on the lookout for these leaches.

Search missions, on the other hand, have you sneakingly hunt for items while under a strict time limit. You must watch out because if a girl spots you, you will have to take out multiple waves of girls before you can get back on track searching for the items in question.

Finally, there are the Doki Doki missions where you must, for lack of better term, drive the demons out of a girl by shooting her sensitive areas. You must then suck up all these demons in an attempt to get to see her in her undies. 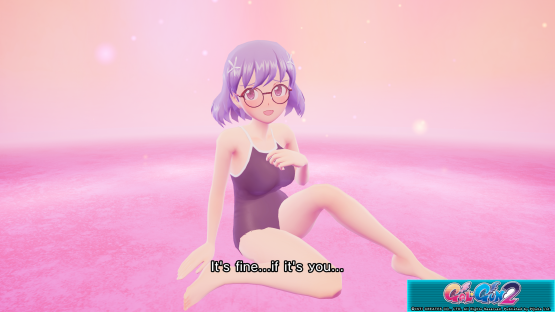 I am searching for invisible demons, I swear

When you are not frantically surviving the terrors of high school. You will be chatting with your absolutely adorable school friend Nanako and your hikikomori gamer girl-next-door neighbor Chiru. In order to deepen your relationship with them, you will be able to give them tasty treats such as Packy sticks, Lollipops, and Macaroons. New special events and even missions open up as you get more intimate with them.

The other girls you gun down aren’t just some faceless mobs either. As you play the game you will get to know them, and some will even give you their phone numbers which you can call and hang out with.

The game has a number of customization options. You can pick the uniform, gym and swimsuit outfit as well as a bunch of accessories for each of the grades in school. At home, you can decorate your room with trophies and items. 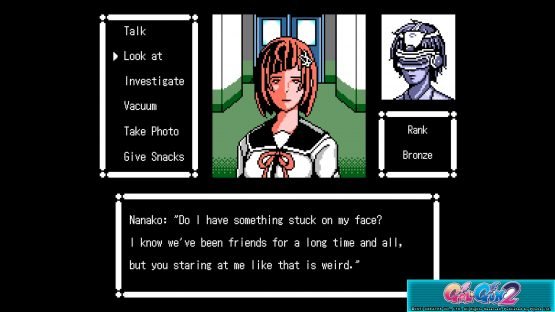 What’s most surprising is how Gal Gun 2 actually makes use of the hardware on hand. The PlayStation 4 version looks super sharp and runs unbelievably smooth, all while the visuals look clean and impressive for the system. The models are adorably detailed, and the animations are great as the girls fumble around while giving you confession letters. If there is a fault to be had it’s that the texture work on some of the stages can be a bit muddied when viewed up close.

Even when it comes to the audio Gal Gun 2 is no slouch. On the PS4 you will be able to use a 5.1 surround system, which is a welcome addition, great for letting you know where the aggressive girls are coming from, with their moans and ecstatic shrieks. The soundtrack has numerous delightful tunes which wouldn’t feel out of place from your typical romcom visual novel, however, when it’s time for the tense boss battles It doesn’t shy away from using guitar riffs which emphasize the atmosphere. 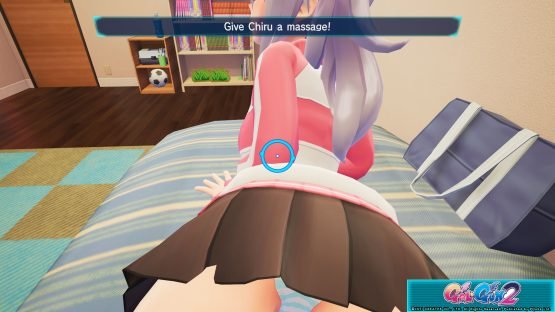 I’m not sure this is called a massage…

The game is available on both the PS4 and Nintendo Switch. And while its evident that the PS4 version is superior the differences are small enough that the Switch version makes for a surprisingly competent port. You’ll have to weigh whether you value a high resolution, shorter loading times, better motion controls and surround sound support, as opposed to the ability to be able to enjoy the same game on your big screen TV and later being able to take it with you and continue on the go.

The only real thing missing from the PlayStation 4 version is VR support. It’s a shame too since the whole formula would translate extremely well in VR. This is even more baffling taking into consideration that Gal Gun VR is available on Steam and supports both Oculus Rift and HTC Vive with Roomscale VR. 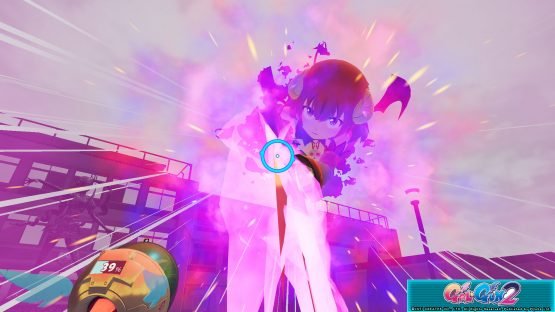 The boss battles really spruce up the gameplay

As ridiculous as it can get at times Gal Gun 2 was a pleasant surprise through and through. From its lewd premise to its ecchi scenes Gal Gun 2 knows its target audience extremely well. But even with these aside the game is a well-crafted package, offering fun gameplay which aims and succeeds in breaking from its on-rail shooter roots.