PlayStation have revealed that the Ghost of Tsushima release date is June 26, which really stacks up the first half of the year for Sony releases along with the Final Fantasy VII remake and The Last of Us Part II. A new story trailer was also revealed which details the Ghost’s journey.

The new trailer showcases Jin Sakai, the protagonist, as well as a few of the characters that will join the story along the way. We also get a look at some of the enemies in the game and some short gameplay clips. 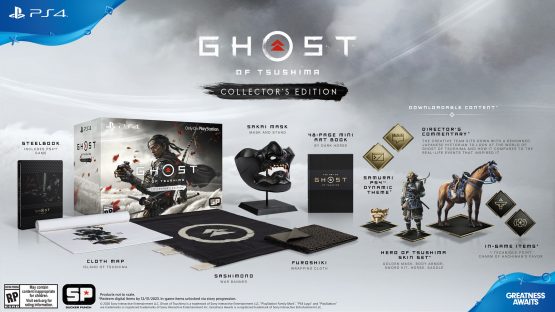 A Collector’s Edition of the game has also been revealed and WOW this one is good, it almost rivals our DanMachi Collector’s Edition… The Collector’s Edition will be $169.99 and comes with a plethora of goodies. The game will come with a steelbook, a cloth map of the island of Tsushima, a war banner, wrapping clotch, 48 page mini art book, and best of all, a Sakai mask that looks incredible! You’ll also receive a bunch of virtual goodies including a theme and Director’s Commentary of the game.

Our Picks From The ‘Big in Japan’ Sale