Granblue Fantasy Versus Zooey Is The Fifth DLC Fighter

A colour pack leak has given us a look at the final character in the Granblue Fantasy Versus season pack, and it looks like it’s going to be Zooey. Zooey is one of the more popular characters in Granblue Fantasy so it makes sense that she would be added to the growing roster.

The leak appeared in a colour pack on the PlayStation store that gives you customisation options for the 5 Season 1 DLC characters. The pack description went on to list the contents, and in doing so, listed each character in the pack. 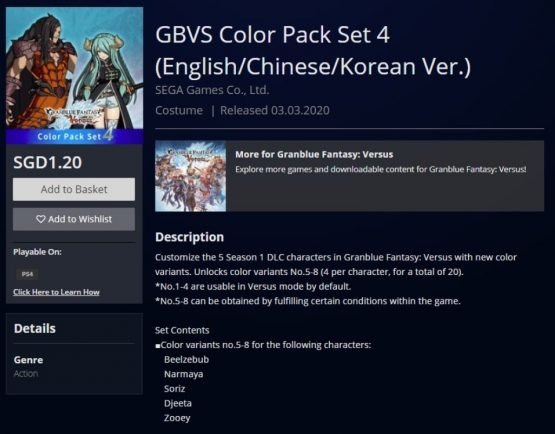 This of course hasn’t been confirmed quite yet, but it would be incredibly strange if this turned out to be false, and Zooey seems like the right fit for the final character of season 1. There is actually a livestream upcoming this weeking for the 6th anniversary of Granblue Fantasy, so that could be the opportune time to reveal the new fighter.

Thankfully, we don’t have to wait too much longer to get our hands on Granblue Fantasy Versus here in the West. It’s out today in North America and on March 27 in Europe!

If you’re looking to get started with Granblue Fantasy Versus, check out our Beginner’s Guide right here!

Are you excited to get fighting?