From its humble mobile origins to an array of arcade installments and now Steam, Groove Coaster has certainly picked up traction! I’ve got to say, I had pretty high hopes for it from the trailer. Its cute anime avatar and sense of movement unusual to many rhythm games drew me in, but delving below the surface uncovered…not all that much.

Frankly, Groove Coaster on Steam is a bit of a mess. Having some issues to iron out when bringing a game to a platform for the first time is understandable, but Groove Coaster suffers for it quite a lot. The track list and genres are pretty limited. While there’s already some DLC on the horizon, it would have been nice to see a little more variety in the base track list. It isn’t that stingy when it comes to numbers, offering 36 tracks, but it’s by no means exhaustive. The music selection is much of the same high-tempo electronica as in games like SUPERBEAT: XONiC, but lacks any of the extra charm provided by the inclusion of Vocaloid songs and music from other games that can be found in the iOS and arcade releases. There are some Touhou Project songs on the way already as part of the lengthy DLC plan, so the DLC will hopefully spice it up a little. 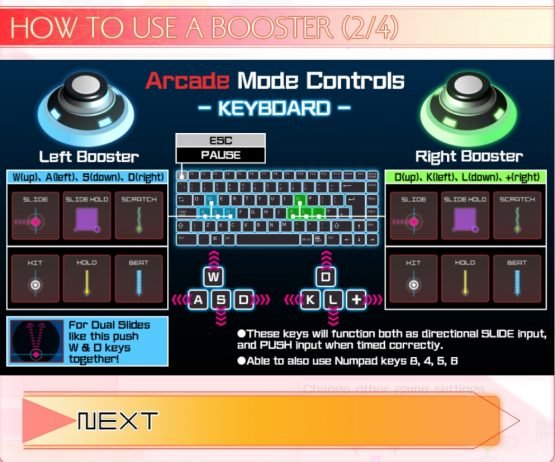 Groove Coaster on Steam is a bit of a mess.

At its core, the gameplay is simple and easy to grasp, though the game doesn’t do itself any favours with its somewhat obfuscating tutorial and vague terminology. I’m sure it would take a fair amount of practice to get really good at it, but Groove Coaster isn’t particularly successful at holding enough interest to make you want to improve. The various icons for different types of inputs can look pretty similar, and things can easily become a bit chaotic, especially when a map zooms out. The icons are pretty small, and the similarities in colour — with many of them being white and light shades of blue — don’t help. However, changing colours between levels makes it even more confusing. 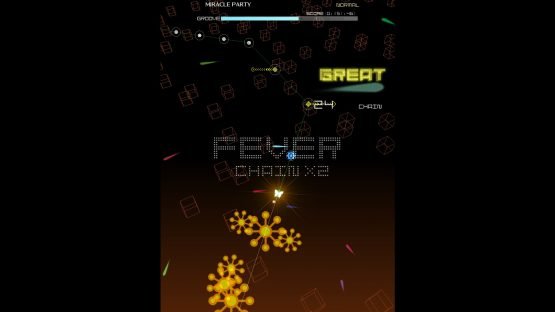 With that said, the range of different input types is surprisingly and pleasantly diverse. As well as the standard ‘press button when approaching the icon’ and hold notes, there are directional slides, slide holds, and beat and scratch notes that require hitting the button repeatedly or alternating between left and right in quick succession respectively. In Arcade Mode, which requires two hands, there are also criticals where you have to hit two buttons at once, as well as dual holds and dual slides. It’s a change to be going towards the icons rather than have them come towards you too, which does actually feel weirdly different. 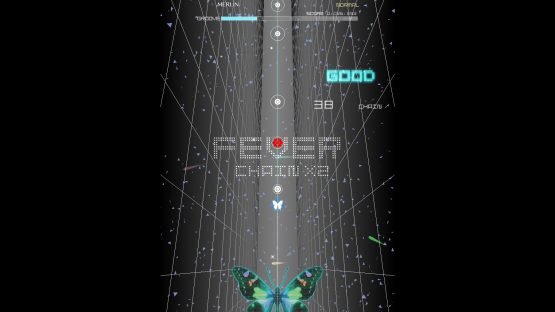 Being made to play everything on easy when half the mechanics aren’t introduced until normal is a little tedious.

You have to complete a song on easy to unlock it on normal, then on normal to unlock it on hard. An “extra” difficulty can also be unlocked for some songs by completing hard. I’m all for games making me work to unlock things, but being made to play everything on easy when half the mechanics aren’t introduced until normal is a little tedious. The game doesn’t really pick up until normal, so this method of doing things doesn’t give the game a longer lifespan, it simply makes it longer.

The ‘coaster’ part of Groove Coaster is very much one of its strengths, and the fluid movement and changing camera angles make it just as satisfying as it looks. Patterns spring up with each successful note as you glide through colourful and atmospheric stages that make each level feel like an attraction in its own right. The combination of music and mesmerising backgrounds provides a unique, dynamic spin on rhythm gameplay. 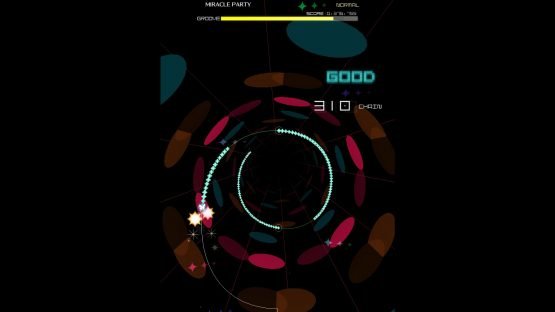 The combination of music and mesmerising backgrounds provides a unique, dynamic spin on rhythm gameplay.

Ad-libbing extra sound effects in a level is a nice idea, but limited in its execution. I also can’t help but feel it shouldn’t be as much of a focus as it is. If you complete a song with no ad-libbing, Linka will tell you to give it a try every time, so it’s really something the game’s pushing on you. It’s pretty hard to get a decent score unless you do ad-lib too, which kind of defeats the point of pressing buttons in time to the music when it wants you to just mash buttons constantly for a few added tambourines.

Groove Coaster can be played with a game pad or just the keyboard – allegedly. The game definitely seems to favour playing with a game pad and will not hesitate to introduce notes that I’m pretty sure are impossible to do otherwise, despite saying you can play with just a keyboard. It’s also not very clear on the controls, but fairly generous with mapping them. Want a button to be two buttons at once for those pesky double notes? Fine. You don’t appear to be able to map buttons for controllers though. That would be too much.

You can also play in a variety of screen modes, but the game recommends 16:9. Sadly, the resulting huge blank sidebars make it very much feel like playing a thinly-veiled mobile port. The other options don’t really avoid this issue either. 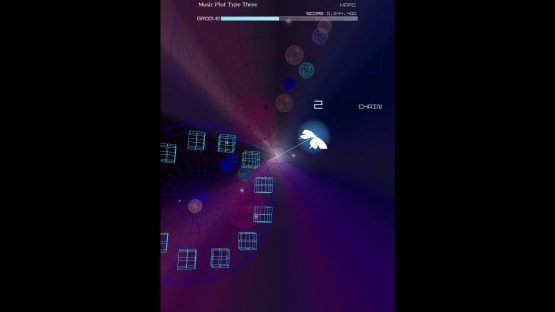 Playing with a keyboard is also not comfortable at all.

If Arcade Mode is a bit too hectic, especially when you’re still getting the swing of how the songs go, there’s also a one-handed Casual Mode. Given one-handed play is, well, one-handed, various note types such as dual slides and dual holds are removed for a more laid-back and streamlined experience. It can still be quite tricky on the higher difficulties even with one hand though!

When you really want to get stuck in to Groove Coaster though, there’s the Non-Stop Mix. Non-Stop Mix is a neat idea, giving you a stream of up to 10 songs to play through without breaks. You can make your own mix of just your favourites or have the game generate one for you. While it may not have the tension or pressure of a survival-type mode, it’s still a fun option for a change of pace, and it’d be great to see more rhythm games include a similar kind of set-up. 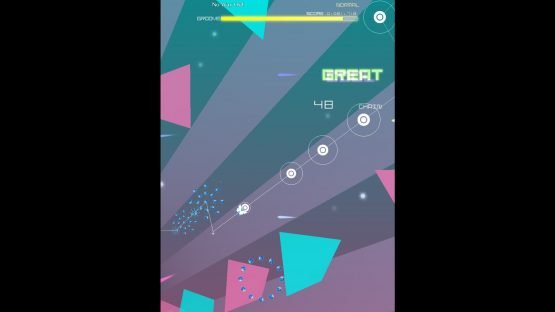 There are a variety of cute and quirky 2D and 3D avatars you can purchase with the GC you (slowly) earn through playing, as well as a few extra songs you can buy in the game’s shop. In addition to these, there is a small selection of disappointing level items. You can buy items that convert some of the notes you miss to “good” or ones that mean all the music will play even if you mess up. Given there seems to be no real penalty for making lots of mistakes as in some other rhythm games either, there’s very little incentive to actually use these power-ups.

When it comes to challenges, there are only two options. “No info” hides your gauge, rating, and score while you play, while “Just” means anything other than a “great” will register as a miss. It’s kind of a shame there are so few options for the items. 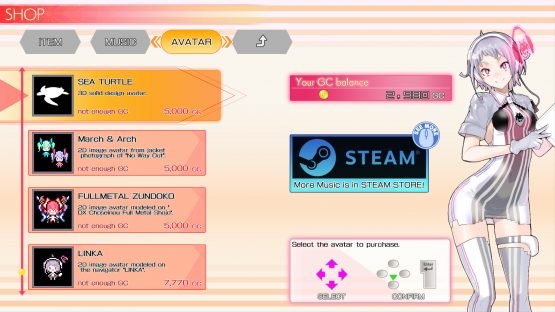 Linka, the anime girl who talks you through the game and chips in with motivational one-liners on menus, is a cute addition, and you’re able to turn off her voice or her appearance completely if her repeated peppy stock phrases grow too much. When I saw all the other players with Linka as their profile image, I’d thought maybe you’d be able to buy different navigators with your hard-earned GC, which would be a neat idea but is not the case. It’s possible the other navigators from the arcade versions will make an appearance as DLC, so that could be a nice touch.

Groove Coaster provides an interesting take on rhythm games, but not the depth or satisfaction of many of its contenders. I can’t help but think some of this may be that’s simply not meant for Steam – it would probably port really nicely to Switch though! Switch has proven to be a great console for porting rhythm games both when it comes to controller compatibility and touch screen modes, so Groove Coaster would fit right in! 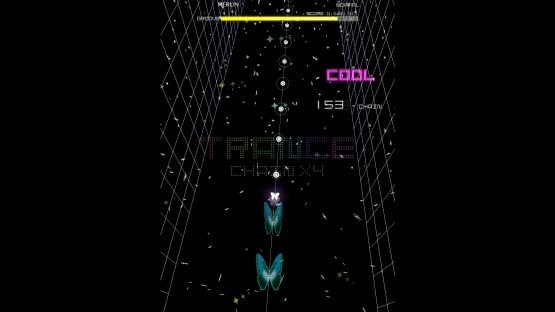 Groove Coaster on Steam may just need a little more time to come into its own.

While Groove Coaster‘s drawbacks may easily be fixed in the future, it’s a shame that so much boils down to ‘it might get better with time’ at the moment. It’s worth a look for people who haven’t played the mobile or arcade versions, but those who have may find this port somewhat lacklustre in comparison.

Groove Coaster on Steam may just need a little more time to come into its own, but for now it’s fairly so-so. Even so, it’s certainly piqued my interest in the Groove Coaster games as a whole, and I’ll still be keeping an eye on it for what’s to come in the Steam version too!