Gungrave VR announced for this year by Marvelous Europe

I might not be the biggest fan of VR, but I can appreciate when a game is a perfect fit for the platform. So, on that note, the trigger-happy Grave is coming back, and this time in virtual reality in the form of Gungrave VR, thanks to those lovely folks over at Marvelous and set to launch in Autumn 2018.

The basic premise is that following the battle against the Orgmen—creatures transformed by the mysterious drug, SEED—Mika Asagi has tracked the manufacturing of the narcotic (along with a whole new Orgman infestation) to South City. With the city streets overrun by these newly formed creatures, Mika requests the assistance of Beyond the Grave (Grave, for short), waking him from 14 years of rest after his previous battle. She hopes for him to use his power to help rid the city streets of the Orgman threat and stop the flow of SEED once and for all. 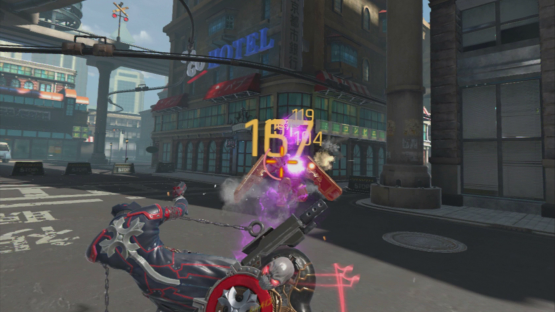 Players will take control of Grave with his iconic set of dual guns, Cerberus, and will have to master different playstyles to take down the various foes that stand in his way. Levels consist either of free-moving third-person gameplay or first-person action that includes both stationary and mobile sections, offering players a variety of modes to help put them in the shoes of the resurrected Millennion agent himself. With an array of shooting attacks, close-range strikes using Grave’s coffin, Bullet Time, and more, Gungrave VR brings an authentic Gungrave experience to virtual reality for the very first time.

Other Key Features:
Multiple Perspectives to Master: Fight through intense levels that are set to either free-moving third-person mode or first-person mode (both stationary and mobile). Each perspective offers new challenges.

A Legendary Pedigree: Gungrave VR showcases the return of character designer Yasuhiro Nightow (Trigun), with the original Gungrave designers at Red Entertainment as advisers. Grave and Mika’s designs have been given a thorough upgrade after 14 long years!

Kick Their Ass!: Play on any of three difficulty levels: Normal, Hard, and Kick-Ass. Are you hardcore enough to take down the Orgmen in Kick-Ass mode?

Gungrave VR will be published physically and digitally for PlayStationVR on PlayStation4 in Europe by Marvelous Europe Ltd during Autumn 2018. Keep an eye on Rice Digital for more news on this intense shooter in the near future.