For those unfamiliar, Hakuoki is a visual novel series that re-imagines the real life historical figures of the Shinsengumi as handsome and pretty anime boys that you can romance. Playing as a young woman looking for her missing father, you fall under their protection as you are swept up in the events of history.

Once more, if you are unfamiliar, then Hakuoki: Edo Blossoms is not for you. Turn around, and go right back to Hakuoki: Kyoto Winds (a very good game). Together Kyoto Winds and Edo Blossoms are two parts of a whole story, and they serve as an expanded, more detailed remake of the original game from all the way back in 2008. 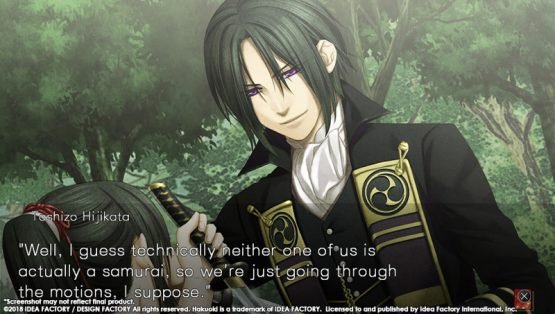 All of the Hakuoki boys are present and accounted for, but leading man Hijikata has a slightly longer route than the others.

There’s a heck of a lot of unique content between all 12 boys’ main routes.

At the end of Kyoto Winds you’ll have (hopefully) paired up with one of the boys, after winning their hearts via various choices. They were all mixed in together, and you had to win their affection before ending up on their final chapter. Because of that, in Edo Blossoms, you simply pick your starting boy, and carry on the story on their route the whole way through.

In a sense, that sort of makes every route in Edo Blossoms one long final chapter (though there are 4-5 individual chapters on most of them). On one hand, that gives you a heck of a lot of unique content between all 12 boys’ main routes. But, on the other, it loses something in forgoing the weave of events spun in Kyoto Winds. The routes are different, but they all hit the same historical beats, so sections can feel quite familiar even though you’ll be playing through them again entirely. 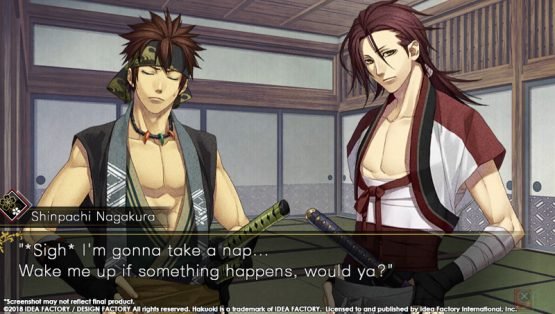 Shinpachi found some of the routes a bit repetitive…

Not only do set routes make for less sense of variety, but also of challenge.

Not only does that make for less sense of variety, but also of challenge. Where the first game tested you on choosing to be in the right places at the right time for each warrior and which answer would win the affection of who, Edo Blossoms is much more binary.

Because you’ve already chosen your lover-to-be, most choices in the game offer only short variations of scenes, and will either be “the one that wins you affection” or “the one that doesn’t”. Simply reloading saves will take you through these linear tales with full blooming affection pretty easily. 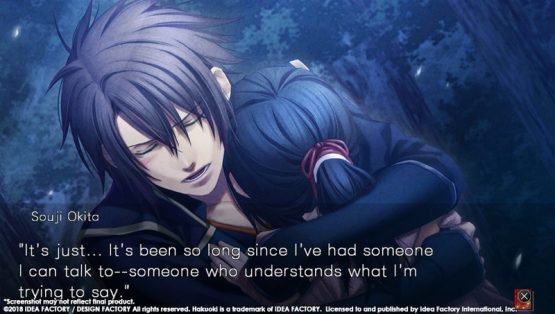 Many romantic moments like these await you in the world of Hakuoki.

As part of the events of the last game, most of those you’ll be pursuing have turned into “furies”. Essentially these are vampires who crave blood intermittently, and have enhanced physical strength and senses. This makes them like demons — who also exist, and are aiding the enemy of the Shinsengumi as war ravages the country (also, you are demon, it turns out — a lot happened in the first game!).

Because of their bloodlust, you’re frequently given the option to give them blood, give them medicine, or force them to endure it when they get a harsh bout of hunger for that blood. In a sense, this means you have to manage a “corruption” metre alongside the romance one. If they become too “corrupt” (hungry for too much blood), you can end up with some dead end game overs. But, it seemed there was no downside to simply giving them blood every time. 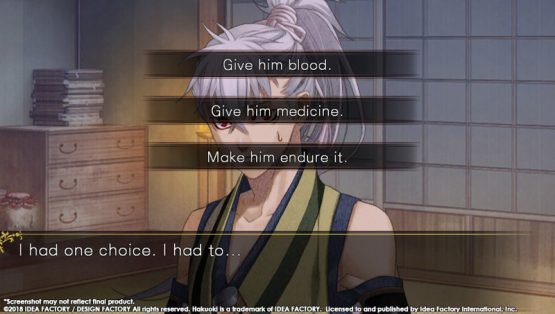 Expect to see these options a lot.

In most cases giving blood or making them endure it rewards you with a CG, but in each instance the backgrounds are simply replaced behind the same image. You’ll be having to deal with this four or five times each route, and they really slow down the pacing and become annoying quickly if you play through multiple routes.

Being locked to certain character routes, on top of story circumstances, means there isn’t all that much CG variation in general. There aren’t many CGs or scenes of the lads interacting at all, and it feels a bit limited. Covering more locations, you get less of a sense of space than you did in the last one which was set mostly in Kyoto. Re-used backgrounds from the first game add to that, even though the location is meant to be quite far away (as a side note, I would have loved a map of the country to show where they were moving). 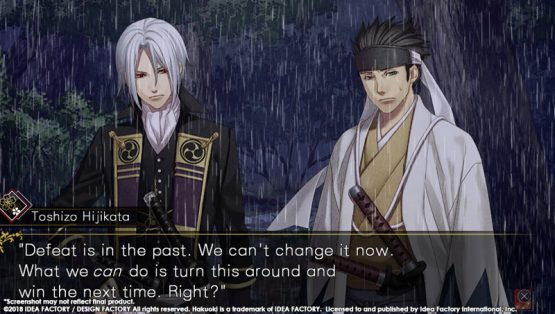 Edo Blossoms feels like the weaker of the two halves, which isn’t always the best position for a conclusion to be.

The game starts off with the Shinsengumi on the backfoot as they fight for the shogunate. And, because of history, things don’t really get better for them. With the demons and furies too, it’s a bleaker tale than Kyoto Winds. But, still a good one. It’s great to follow through your favourite characters as they take part in the final days of the Shinsengumi, and to help them achieve happy endings to their lives (though, in many cases, they’re bittersweet).

Together, these two Hakuoki games are a great experience and story, and are filled with incredible, memorabke characters. It just feels odd that they’re split in two at all. They’re begging for a complete PS4 port. With 12 characters to romance, there’s a heap of excellent content across both titles. It’s just a bit of a shame that (perhaps out of necessity), Edo Blossoms feels like the weaker of the two halves, which isn’t always the best position for a conclusion to be.

Exciting 2018 English Otome Games to Keep an Eye on!
Recommended Products from our Store: