There are a lot of Hakuoki games, even only counting those released in the West, and many retell the same story. Although still built on that one main framework, Hakuoki: Kyoto Winds breathes new life into the series, and provides a welcome return to the characters and charming historical inaccuracy of Hakuoki I love.

What Kyoto Winds brings to the series most of all is its new content. By adding 6 new routes — 3 of which are for totally new characters. Extra scenes and subplots make it feel like there’s a lot more going on, and give the player more freedom in picking what they want to focus on (depending on who they want to pursue, of course) as well as providing more decisions in general. There are a lot of choices to be made, making it easy to get lots of new scenes and keeping multiple playthroughs varied and interesting. 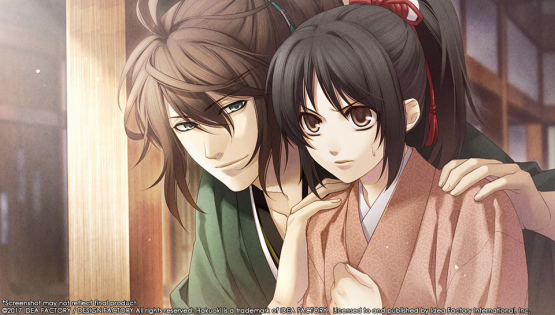 There are a lot of choices to be made, making it easy to get lots of new scenes and keeping multiple playthroughs varied and interesting.

The new characters are fun, though none of them really captured my interest as much as the original cast. On that note, it’s great being able to pursue some of the side characters from previous games, and figuring out how to get onto their routes, gain points, and unlock scenes with them was a fun new challenge. The three totally new characters can be even harder to pursue (sometimes it’s hard to even tell how to begin) but that’s another exciting challenge all of its own.

On top of all of that, there are a few new characters who aren’t romance options. There’s not always a huge amount screentime for these additions, but they bring a little extra variety to routes and help bolster up the cast so the Shinsengumi feels more like a big organisation. I can’t help but find it funny, though, that they added routes for some of the side characters from the previous games and then added new attractive side characters who don’t have routes… Why do you do this to me…? 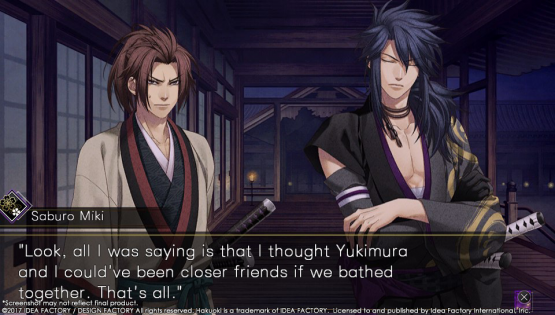 There are a few tweaks to how the game is laid out that make it look nicer overall, with revamped text boxes and tweaked menus, most notably for the Warrior Records. The Corruption Metre has been taken out, but it doesn’t play such a role in the Kyoto arc, so there’s little damage done there.

The Romance Metre is now displayed as a percentage too, which makes it easier to gauge how well you’re doing. Like in the previous games, it’s a pretty useful feature in monitoring your progress with a character. In my experience, you need to pick a character and stick with them or you’re headed to the (rather gloomy) Normal End, so being able to keep track is actually kind of important. Similarly, you can still tell when you score points from a decision too. 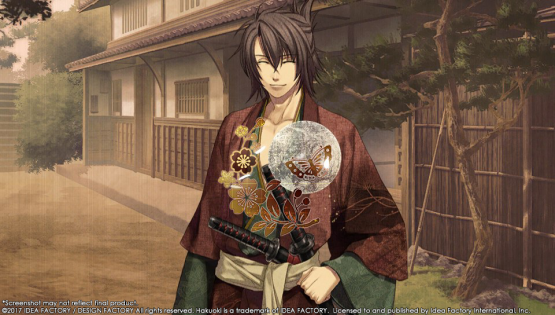 There are a few tweaks to how the game is laid out that make it look nicer overall.

Another of Hakuoki‘s lovely player-friendly features I’m glad to see return in Kyoto Winds, is the ‘rewind’ function. This lets you jump back to any point in text log and try again from there. As such, it provides a really quick and easy way to test out different options and change your mind about a decision when you start straying on to the wrong route. I use the rewind button to no end in my pursue-one-person-and-actively-ignore-everyone-else approach, and I think it’s a great function that more visual novels should have, to be honest.

You can also select any chapter in the game to start from using the returning Record of Service function, allowing you to fill in any gaps in your CG gallery much more easily. This becomes available on completing any character route, but you won’t get it from the Normal End.

As well as new content and a few little presentation adjustments, Kyoto Winds contains a new trophy list from the PS3 version, Stories of the Shinsengumi, with plenty of additions to account for all the new routes too. As before, these are nice not only for their satisfying completion element, but also because they’re pretty funny, adding a touch of light relief to the politics and action of the game. The new opening song is really catchy too — it’s probably my favourite Hakuoki opening. 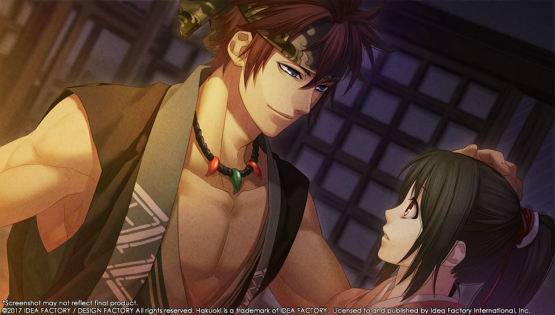 It’s a shame to see Kyoto Winds cut off in the height of exciting plot, but what’s there is still a great story. Hakuoki is an absolute gem, so while Kyoto Winds may be arguably only half a game, it’s half a really good game. The new characters and story content definitely freshen things up, and I’ll be crossing my fingers that we see the follow up game — if not the Fuukaden compilation, which would be ideal — come West as well.

With 6 new character routes, there’s certainly still a draw for players of previous titles. Primarily though, Kyoto Winds provides a nice, shiny introduction to the series for any newcomers.