As reported earlier, at the FINAL FANTASY XIV Fan Fest, today Naoki Yoshida today revealed the new race, the Viera. But a lot of people were wondering why there were no male Viera represented in the promotional material or trailer.

In a press conference, Yoshida was asked whether this was going to continue to be the case or whether male Viera would be coming with the 5.0 update to the popular MMO. However, he refused to comment on this matter, teasing that this would be revealed at the Tokyo Fan Fest on March 23rd-24th 2019 (he even did a motion zipping his mouth).

You might remember the Viera from FINAL FANTASY XII, with the fantastic Fran being a playable party member for the journey. Although male Viera were mentioned in the lore of the world, they were not seen. The same has been the case for the Viera that have appeared in the world of Eorzea so far as well. 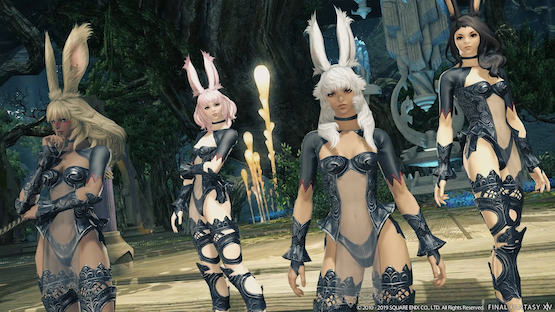 The wait for this is like torture! What do you think about this new race for FINAL FANTASY XIV? Will you be changing to a Viera when the new race arrives with the update?