An interview in the latest issue of Famitsu has revealed that, after 13 long years of bringing life and hometown to the masses with them, renowned “huge boobs producer” Kenichiro Takaki is leaving Marvelous! He will cooperate with remaining staff as producer for Senran Kagura, but is letting the folks over at Marvelous handle adjustments internally.

Further details from Famitsu shed some light on why Takaki is making this move and what’s next in store for him (thanks to Ryokutya2089 for the info):

The main reason for Takaki leaving Marvelous is the restriction on sexual content. He felt that a thread had snapped within him. He went on to say that, while it may be criticised often, sexual content is enjoyed by many people and he felt that this variation was something that supported the gaming industry, but now it has been so easily broken. Takaki said he welcomes regulations and restrictions to protect specific genres and ranges. However, the current trend will definitely have an effect.

Currently, Takaki is working on a new multimedia project outside of Senran Kagura with Marvelous that includes both a game and an anime. There will be beautiful girls, but their clothes will be staying on. Development for the project started about a year and a half ago, and it will be an orthodox and fervent game. The Famitsu interview shows an image of what appears to be a girl on a motorcycle.

Takaki commented that he wants to make something that will make people say “How sassy! He made something amazing even though he’s the oppai producer!”

“Even if my place of work or the nature of my titles changes, what I show won’t change and I don’t want it to. Though I tell dirty jokes and say irresponsible things, I’m a game fan at heart, and I’ll continue working hard to make games.” 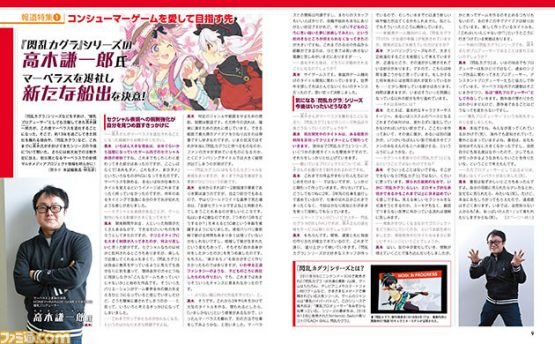 This is some pretty big and surprising news, but I’m sure whatever Takaki comes out with next will be great. It will be very interesting to see what this multimedia project turns out to be as well as what wonderful new things he will come up with as part of Cygames now!