If you’ve not seen anything about Kuma Miko: Girl Meets Bear it’s the Spring 2016 anime adaptation (by Kinema Citrus & EMT Squared) of a popular slice of life comedy manga of the same name by Masume Yoshimoto.

The ending of the anime differs considerably from the manga, in tone more than anything else. Not only did a lot of fans of the cute and fun anime take issue with this, but so did the manga’s creator, Yoshimoto. He wrote a passionate response to the episode on his Tumblr which has since been removed, but has already been spread widely online and archived. We’ve provided our own in-house translation of his blog post underneath. 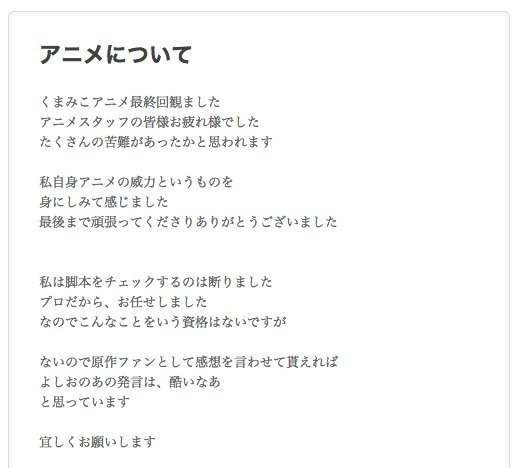 Thank you to the staff for all the hard work on the anime.

We’ve been through some difficulties along the way,

And I’ve truly experienced the power of anime.

Thank you for following it through to the end.

I’ve rejected requests to do script checks and left them to professionals.

I know I don’t have right to say this but as I’m passionate about the original work (the manga), what Yoshio said was unacceptable.

Those are my thoughts on the matter.

Yoshimoto does seem quite appreciative to the anime staff for their hard work turning Kuma Miko into an anime, but it does seem like fans he was a little concerned about the strange tonal shift in the ending. Considering his hands-off approach it must be quite odd to see your work and characters taken and changed in quite a significant way. 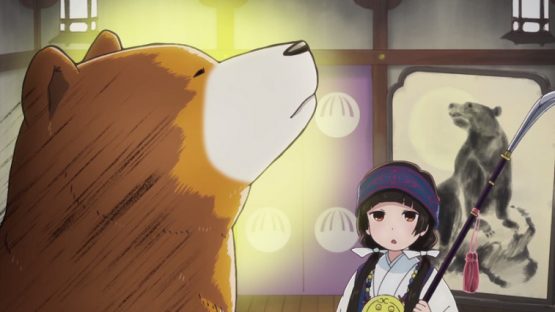 It’s also worth mentioning that one of Kuma Miko‘s scriptwriters, Pierre Sugiura, has since deleted his Twitter account, possibly due to the response of both the audience and Yoshimoto.

Kuma Miko had a lot of positive pre-release and airing buzz, but this downer ending seems to have really affected the opinion of viewers online. It’s a shame to see an anime stumble so much on the landing with the Kuma Miko ending, and it might miss out on a lot of potential recommendations as a result. If you didn’t like it, then maybe you should give Yoshimoto’s original manga a shot instead.

If you want to know what happens in the final episode we’ve spoiler tagged it for you here:

Machi’s social anxiety reaches a breaking point and she gives up on her dream of going to school in the city. Natsu encourages this, telling her that from now on she will never have to think or do difficult things again. Machi accepts this answer and mindbreaks. Everything ends with Natsu trying to explain the internet to Machi, who at this point has regressed into a childlike state and has either no perception of technlogy whatsoever, or is in complete denial of its existence. This all happens while the happy ED song plays, and it’s all just kinda WTF?! – Reddit User The Elite Nub