NIS America confirmed today in a press release that La-Mulana 1&2 will be coming to PS4, Nintendo Switch, and Xbox One in early 2020. We also got a look at the Hidden Treasures edition of the game which comes with some cool collectibles.

La-Mulana 1&2, originally released in Japan back in 2005, are making their way onto PS4, Switch and XBox One as part of a bundle in March. According to a press release from NIS America:

Do you dare venture into the depths of La-Mulana and Eg-Lana?
In LA-MULANA 1 & 2, navigating these ruins is no easy feat, as seen in our newest trailer. The player must brandish their whip and sharpen their wit to truly conquer the mysteries that lie within this title, releasing March 17 in North America, March 20 in Europe, and March 27 in Oceania for PS4™, Nintendo Switch™, and Xbox One!

The games come with an awesome Hidden Treasure edition which includes a 2-disc soundtrack, an artbook and a jigsaw puzzle! 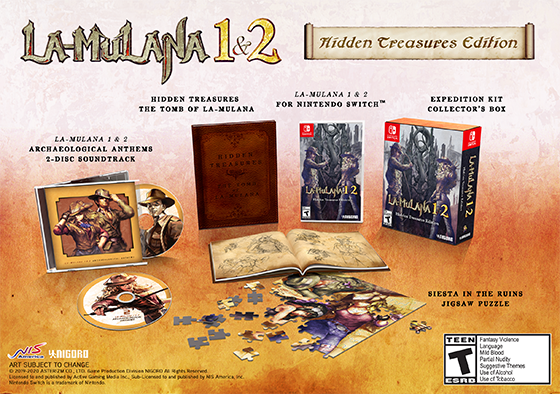 Join our Discord here to continue the conversation: https://discord.gg/ZSV6pWG