The Legend of Legacy Review (3DS)

The Legend of Legacy got mixed reviews in North America but due to it’s Bravely Default-inspired gameplay and visuals, I was anticipating it’s release in Europe and it really isn’t that bad!

I wish there was a deeper story (there almost isn’t one at all!) and character development to it but the gameplay did more than enough to keep me itching for more. You can pick one of several characters in Legend of Legacy, all of which have a slightly different story but not really enough to justify playing through it multiple times, and whoever you don’t choose can be recruited into your party almost immediately. I chose Bianca, a girl who’s trying to remember the memories she’s lost through amnesia, as I loved her design the most and thankfully, I was joined right away by the other character I was tempted to pick! All characters are travelling to Avalon with their own motivations, and where they’re freely allowed to travel to the areas around it and keep any treasure that they find.

It’s odd how story-light the game is, considering the scriptwriter is Masato Kato. Not aware of the name? You’ll be aware of some of his works including Chrono Trigger and Chrono Cross, Xenogears and had a hand in penning Final Fantasy VII. To his credit, the story that is there is enjoyable but there’s simply just not enough of it – it’s mostly told through brief dialogue and some flashbacks, but there’s not much character development or tale to go around. Those hoping for another Bravely Default will be disappointed, but those looking for great gameplay and exploration should be satisfied. 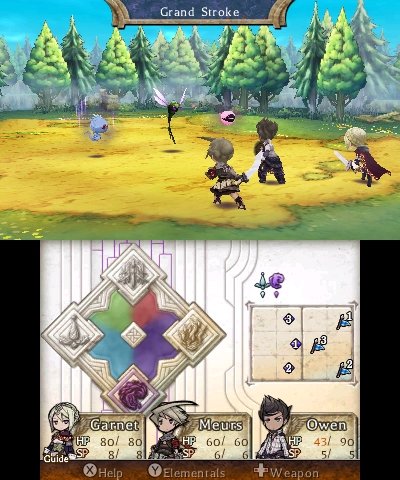 You can recruit multiple characters but you can only take three onto field and into battle. The camera slowly pans from side to side as it does in Bravely Default, and there’s even a team formation dubbed ‘Bravery’ that plays a big part in more than a few battles. Bravely allows you to put someone on guard, absorbing hits for themselves and their allies, whilst the other two attack. You can also make all three party members attack with various skills and abilities, with each character excelling in something. Having Eloise in your team is great as she can heal and revive, as you cannot use items in battle. Combat is simple but tough, meaning you’ll be grinding (as is standard for JRPG’s) just to be able to comfortably fight some of the enemies in the first region and, of course, the first main boss who was able to wipe my party out with one attack.

There’s a unique system revolving around elemental shards, which consist of water, fire and wind and give you different benefits in battle. If you have a move under one of those elements, you’ll need a singing shard equipped to that character to be able to use it. Enemies can also make use of elemental attacks and shards and if they do, you’ll need to renew your contract with the singing shard to be able to make use of those attacks once again. This adds a fresh layer of strategy to the game and can easily turn the tide of battle for better or worse!

Exploration is simple and mostly consists of walking around each area to fill out your map which you can then sell for money – you can only do this once so make sure you’ve filled out the entire area before selling! Whilst some areas are mostly for this and grinding, some areas are much more important and will further the story via learning more about the history of Avalon and finding out more about your characters personal motivation. 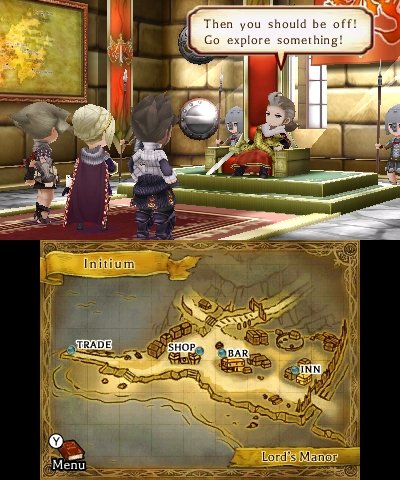 The visuals are pretty with chibi models and a storybook-like world to explore, with the environment popping up as you walk along like a pop-up book. There are woods, caves, deserts, lands covered in ice and more to explore, hitting all the right notes when it comes to JRPG locales. The 2D artwork shines brilliantly alongside the cute 3D visuals and if the story isn’t to your liking, then you should be able to easily find fun in the areas created. The action looks great with a mix of magical and fantastic moves, and the foes you’ll use them against are creatively designed and, again, would not look out of place in a children’s storybook.

There’s very little voice-acting and very little dialogue, but the OST has been composed by none other than Masashi Hamauzu. You might know him as one of the best composers in gaming, being the main composer for the Final Fantasy XIII trilogy as well as working on several other Final Fantasy titles. The OST here may not be as memorable as others he’s worked on but it still manages to impress me, and it’s a shame that the only thing really letting Legend of Legacy down is the minimalistic story.

The Legend of Legacy may not be for everyone with it’s difficult battles, grinding and lack of story, but the game is quite easy to learn and, if you fall in battle, you can restart the battle again. You can also flee from most battles but you then end up at the start of the map. It’s easily accessible and I’m sure the visuals will help to pull in more than a few buyers and, whilst I’ve enjoyed my time with the Legend of Legacy and would recommend it, it might be a game where you want to try the Nintendo 3DS eShop demo first.

Persona Q: Shadow of the Labyrinth
View in Store