Releasing in August, Love Ice Rink is the middlest release from DeareaD this year, launching in August for mobile phones (both Android and iOS). Yuri on Ice fans out there might have already heard of this one, as it’s an otome game about ice skating where you romance one of three ice skating boys. 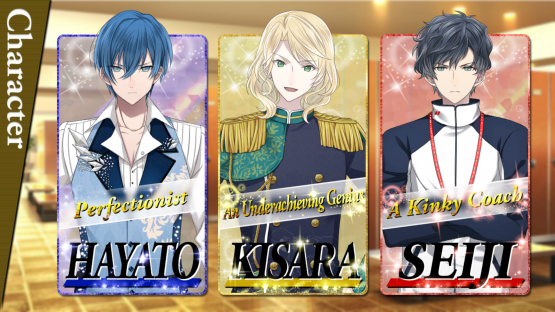 Right off the bat, it’s not exactly revolutionary for a free to download mobile phone otome game. As you’d expect, reading a portion of the game costs a currency (diamonds, in this case), and you can buy more if you want. Every day at midnight (up to a maximum of) 5 free diamonds are replenished, and you can even earn 3 more a day by watching ads. These ads can be watch once every 15 minutes, so stock up as you begin to deplete them.

Also, twice a day a diamond can appear on screen randomly (allegedly — in truth, I never got it more than once a day). If you click it, you get the chance to earn an extra diamond by sharing about the game (sorry, my LINE contacts), which is sort of a nice touch. Sometimes you just have to watch a bit of an ad after a portion of the game anyway. 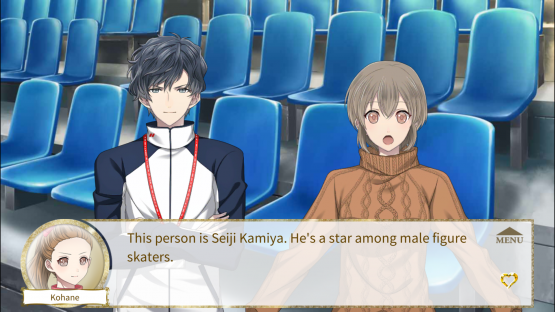 All in all, it’s not too bad, and there’s not a whole lot more trying to get money from you. There’s no abundance of different currencies, dress up modes, or bonus mini-games after your wallet. Don’t get me wrong, I like dress up and mini-games as much as the next person, but when it comes to freemium apps like this I certainly enjoy a degree of clarity with how it’s operating. 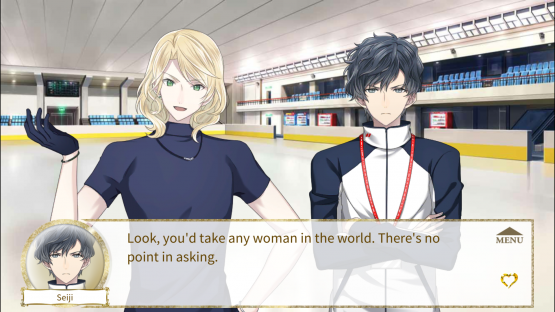 One of the issues with the game is just how miserly the game is with what you read per diamond. Feast your eyes on the words I’ve written up to this point in the review, and that’s about the length of a portion of Love Ice Rink. At times it gives you a little more, but more often than not it feels tiny.

This can often be variable with these types of otome game, but generally this is definitely on the shorter end of things. It always bugs me when they portion out incomplete scenes (I get why they do it, in some instances), but almost every scene is split up into many, many chunks, even if they’re not all that significant. I can’t hold this against it too much, with all the diamonds it’s a sizeable chunk and doesn’t feel like it’s hungry for money, but I feel it bares noting at the very least, as common as it may be. 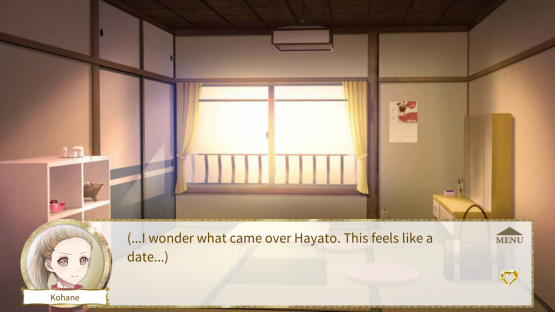 The localisation is okay. It’s not great, but it’s not actively terrible in the way that Vampire Idol was in places. For the most part it’s pretty smooth, with a few odd turns of phrase that sometimes made me smile and sometimes made me frown — the latter when in some cases the phrasing didn’t seem to fit the character saying it all. It’s sometimes weirdly casual. 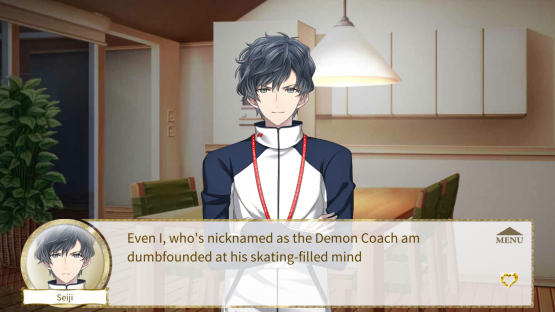 So, the story? Basically, you play a 19 year old female figure skater who’s just messed up big time in the tournament (SOUNDS FAMILIAR). Failing to place, this means you only have one year left as a Junior to graduate to being a Senior, otherwise your ice skating career is over. Nobody likes to stick your nose in it more than Julia, who’s the same age as you, but more accomplished as a skater.

You also have a friend at your side to back you up, the ever lovable Chika. Who also manages the dorm you live in (as she is the landlord’s daughter). Also, after the story gets going, all the main characters end up living in that same dorm as they have to use the ice rink in that area to train for some reason. 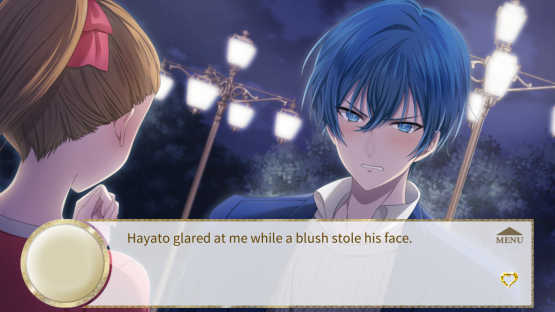 Quickly you’re introduced to your hero ice skating man, Seiji, who has now retired to become a “kinky coach” (SOUNDS FAMILIAR ALSO). He backs you up when Julia is tearing you a new one, but also reveals that he’s a stern hardass too and that you need to train hard to succeed, seeing as it’s your final chance. Afterwards you end up bumping into both of the other male leads, who are doubles skaters, who are breaking up with their ice skating partners.

Kisara Izumi is the “underachieving genius” and a “hedonist”. From the offset he’s clearly a womaniser who will essentially hit on any woman with a pulse, but passionate at that. Then, there’s the yin to his yang, Hayato Misumi, the “perfect prince”, whose previous partner couldn’t meet his exacting standards. 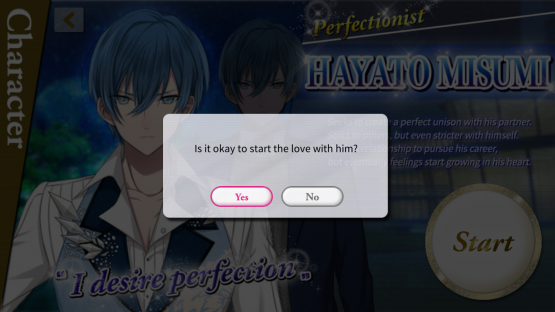 After all this, Seiji calls a meeting with the ice skaters, recommending that you switch to doubles skating for you final chance at placing. He gives you the choice of either boy, or the option to continue skating singles under his own very strict tutelage. At this point you simply choose which boy you will pursue, which is less stressful than bigger otome releases where you have to give pesky choices (though you’ll still need to make choices to get on their good side, indicated by on screen love hearts).

But, it’s just that kind of otome game. Enjoy it. Gary Oak style, Julia chooses the doubles partner you didn’t. You then chip away at chunks of their chapters, and can switch to the other routes as you see fit (but you share diamonds, of course). 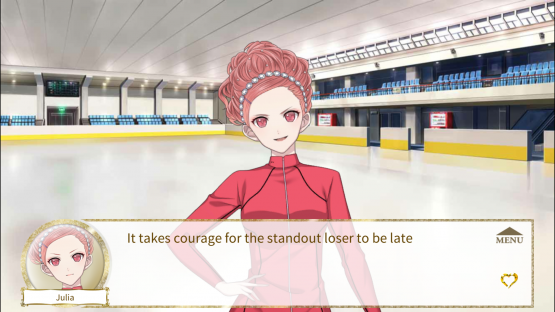 The boy selection doesn’t seem that special at first, and it’s true that none of the boys really offer anything you’ve not seen before. All three of them seem like tough cookies to crack. Kisara just seems way too flirtatious with absolutely anyone, and Seiji and Hayato are a bit mean in slightly different ways. To be honest, from the introductions, they probably make Seiji and Hayato seem a bit too similar — both people with very high expectations of you (though they go in quite different directions).

Naturally, because of the game it is, you can get to the true hearts of all of them and discover the lovely men they really are underneath, but the selection just didn’t seem super variable. I ended up favouring Hayato, because at least he’s in the thick of it with you and is also holding himself to a high standard. Though Seiji’s option to continue singles skating ends up standing out from the other two for being quite a different story. 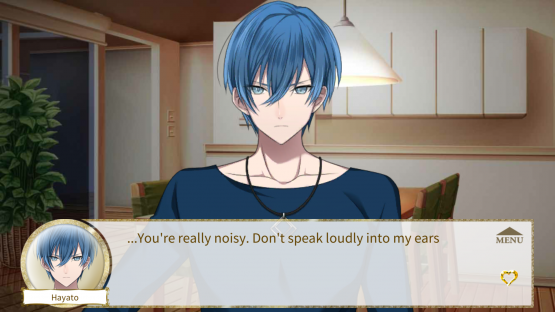 Honestly, the worst thing about Love Ice Rink is just how stingy it is with each portion of the chapters. I actually quite liked the clean and simple way it presented the currency, but with the section length being so short it devalues the currency quite a bit. If you manage to grab both free “share” diamonds, you can grab 10 diamonds for free per day (5 + 3 + 2), which will see you through almost a whole chapter. There’s no route splits, no CGs hidden behind “premium routes”. What you see is what you get.

Because of the short snippets though it can be difficult to get immersed, and you may just end up juggling it as an otome filler as you wait for your other freemium tokens in different games to stack back up. With 10 chapters in total per character it’s going to take you some time to get through this one unless you want to spend some of that cash. But I quite happily made my way through all routes for free. Each character has 3 CGs you can unlock. While the art is nice enough, none of the CGs were particularly exciting. 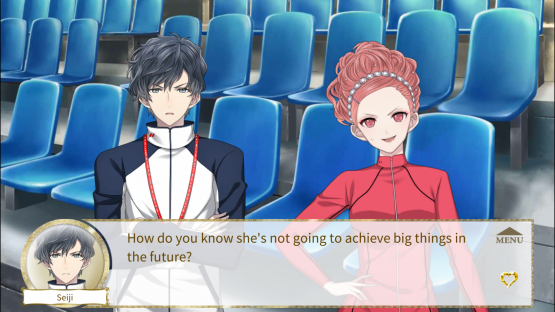 It might not be the best story in the world, but there’s something to it. It’s nice to find out more about each boy, and no matter who you pick it’s a story about working hard, and clearly has some knowledge of figure skating. And the sports competition gives it a nice structure that keeps it easy to follow and naturally enages.

Each chapter has 10 subchapters. So, if you didn’t use any free diamonds somehow, it’d cost about 99p per chapter, or about £8 per chap. It’s not so bad, but it still feels like you don’t get too much bang for your buck when you’re actually in there reading the tiny subchapters.

It’s still really nice to have an ice skating otome game, so there’s that. The quality of the story isn’t great, and it’s pretty tight about giving you stuff to read — but at the same time it’s also not filled to the brim with too many currencies or extra distractions. Still, it might have been nice to have additional options to diamonds like paying straight up for a character’s route. But, they know what they’re doing. 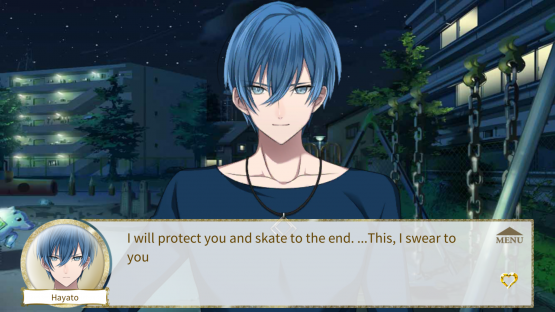 As usual, you might be better off dropping a bigger amount on a paid otome game to get everything and a higher quality experience, or simply playing Mystic Messenger again. But, Love Ice Rink is still a pretty decent package. As far as mobile otome games go, this is a pretty great no fluff experience you can work your way through and enjoy pretty easily. It’s great to see that in the mobile space.

Love Ice Rink is available now for free (with optional microtransactions) on iOS and Android.

Our Guide To Otome Games