Mario and his friends have been getting into sports-related scrapes for years, duking it out across tennis, football, golf and several trips to the Olympics. As long as you don’t think to much about the odd canonical implications of them, they’re often really fun games. So enter the latest sportsball free-for-all Mario Tennis Aces for Switch! But is it advantage Nintendo, or a disappointing double fault?

The story of Mario Tennis Aces is completely nonsensical, as you would expect from a narrative running through a tennis game that doesn’t involve winning a league or something like traditional sports games. Luigi, and others, have been possessed by a demonic tennis racket called Lucien, who is trying to regain his five power stones in a manner a little too similar to Thanos in Marvel’s Infinity War.

All of the story of the Adventure Mode is strung together via fun little skits between the different Nintendo characters that you meet; skits which, with hardly any voice acting, ooze with charm and slowly move the story along despite my internal logic questioning why this world was obsessed with the sport of tennis to such a distressing level. I mean, if you have flagrantly flouted basic health and safety to change the deck of your ship into a tennis court, you have a problem. 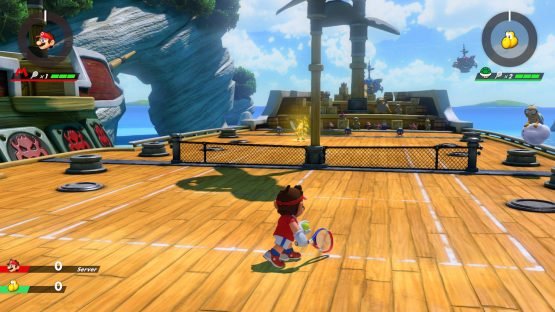 The way this is played out is across an extensive world map, filled with tennis-based challenges and matches against familiar characters from the Mario universe. The challenges can involve everyone running the gamut from having to hit the tennis balls at particular spots to open doors, or maintaining a consistent return string of volleys.

The only problem with this mode lies with the fact you can’t restart the challenges if you fail. You have to go through the ‘you failed’ skit and reselect the challenge from the world map again each time, which means that the challenges become incredibly frustrating on multiple attempts. That aside though it’s definitely clear, at least, that Nintendo have managed to bring out every possible use for the basic mechanics of the game.

Undeniably, this was a fantastic call because the basic mechanics of Mario Tennis Aces are incredibly solid, following the essential principles of tennis with the usual Mario fun added. The aim is to defeat your opponent through hitting the ball into their zone in a way that they cannot return to you, therefore earning points on one of the strangest scoring systems I’ve ever heard. The game is divided up into sets and games, with players switching ends and taking turns in serving. 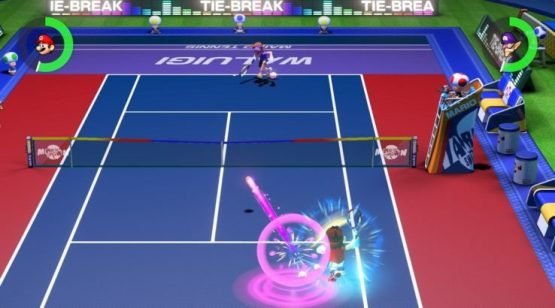 The four main buttons (ABXY) each correspond to a different type of shot, with each of these being manipulable to an extent too. For instance, the ‘A’ button will do a ‘topspin’ shot which is a faster shot that the player can change the trajectory of with the left analog stick. Also, if the shot button is held leading up to the hit, the player can charge the shot for additional power.

Each of the characters play similarly, but each have their own ‘Trick Shot’ that allows them to quickly close the distance to a ball that they might have otherwise missed. Also, if performed successfully, the player will gain a boost to their energy gauge. However, these techniques shouldn’t be thrown out too hastily though because if performed with incorrect timing they cost some of the energy gauge instead. But what does the energy gauge do?

A new addition to this game in the series is the ‘Zone Shot’, in which a star will appear on the court allowing the player (if they have enough in their energy gauge) to use motion controls to determine the exact trajectory of their next shot. Furthermore, these super-powered shots, if the opponent fails to counter correctly, will take a life off the opponent’s racket. If the player in question loses all three lives, they forfeit the match with a broken racket. 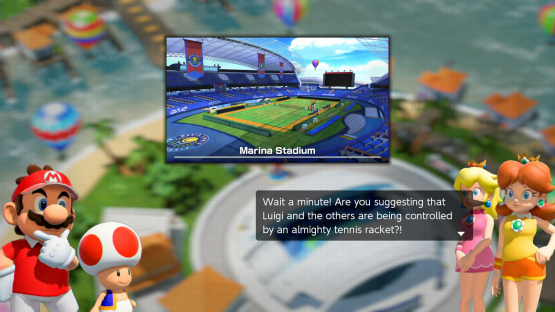 Not only this but the player has access to ‘Zone Speed’, which will allow them to slow time, if they have enough in their energy gauge. This technique will allow them to slow time for everything else in the game whilst they move at normal speed, which can aid in the tricky timing of countering an opponent’s ‘zone shot’ or giving them the ability to return a shot that they otherwise would not have reached in time.

The final use of the energy gauge is the ‘Special Shot’, a unique cinematic manoeuvre for every character that has the potential to instantly break the opponent’s racket. It can however be countered with perfect timing like the ‘Zone Shot’, so be careful as it uses your entire energy gauge and will require successful volleys and trick shots to refill, the latter of which (as we mentioned earlier) can be tricky as they can detriment the player overall.

Mario Tennis Aces has online as well as local multiplayer, the latter of which can be played up to four players on a single Switch, or via local wireless connecting multiple Switch consoles (but I didn’t get to try that as I have no friends). The online can be played as either exhibition matches or in the forms of Tournaments. The net code of these online matches is incredibly good, with minimal (if any) input lag and a decent-sized pool of players at launch, so definitely worth the jump online after getting to grips with the basics. 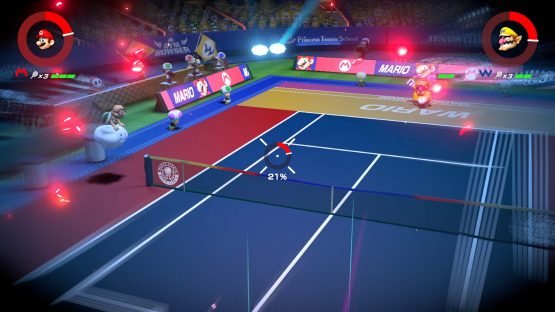 Finally, the game has other modes and settings that can be applied for the sake of accessibility, which I love. The ‘simple rules’ setting allows play of the game without any of the more complicated new shots, and the ‘Swing Mode’ allows the game to be played with the JoyCons imitating tennis rackets in a manner akin to Wii Sports. So, Nintendo are once again putting in the effort to make sure that everyone can play.

This game is beautifully well-presented, with beautiful and imaginative courts and wonderful redesigns of Mario and his friends in tennis attire. All of the design of the game, being frank, is utterly brilliant. The lighting, the frame rate, the particle effects, it all just looks fantastic in motion. In fact, the only problem I have with the aesthetic package of the game is that, given the pantheon of great Nintendo music, the soundtrack of Mario Tennis Aces is largely forgettable.

So, should you get Mario Tennis Aces? This is a fantastic tennis game, with copious amounts of modes and accessibility options, and a great cast of familiar favourites (including Waluigi). All of the fun you expect from a Nintendo game is here, and the gameplay is both solid and satisfyingly flashy. The only small problems I have lie in the Adventure Mode, and you can put hours into the game without even touching that arguable nightmare. An unsurprisingly essential title, and one that more than makes up for the lacklustre Mario Tennis: Ultra Smash; game, set and match to Nintendo and Camelot. 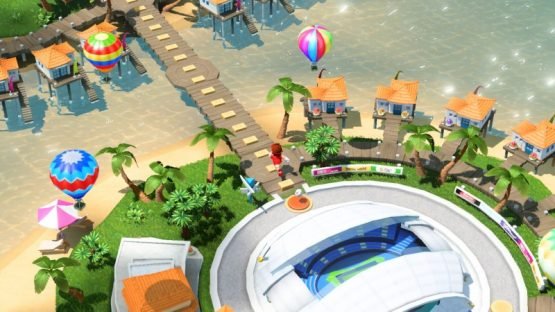 Thank you to Nintendo for kindly supplying a review code for this title. Mario Tennis Aces is available now on Nintendo Switch eShop and in retail.