Whats up with the name of this title? How the heck can blood be melty? What does an actress have to do with a fighting game, and what happens once the code isn’t current anymore? Well it doesn’t matter, what matters is that this is one kick ass game.

Melty Blood is a doujin fighter based off the cult doujin visual novel Tsukihime. For those of you not acquainted with the original source visual novel (shame on you), its written by Kinoko Nasu, the same author of Kara no Kyoukai and Fate/Stay Night.

It was so popular that it was featured on EVO 2010 besting titles such as Street Fighter III: 3rd Strike, Capcom vs. SNK 2, Mavel vs. Capcom 2, Soul Calibur IV and King of Fighters XII.

The game was developed by French Bread, the same team behind the recent Under Night In-Birth game for the PlayStation 3. 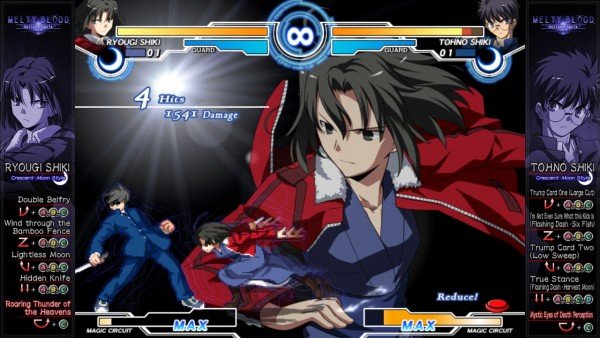 There are a total of 31 fighters available (each with 3 different fighting styles). While they may not be as wacky, eccentric or memorable at a glance as their rival counterparts, they definitely have character. The combat is fast paced and fluid. The systems are unique and make it one enjoyable experience.

Melty Blood Actress Again Current Code will arrive on Steam on April 20th and will feature online multiplayer with both ranked match and player matched battles.

Who knows, sales of the Steam version might even fund that elusive Tsukihime remake we have been waiting for since 2008…

The Best JRPGs on Steam
Related Products from our Store: