It’s kind of hard to write a Nelke and the Legendary Alchemists Review without trying to prefixing it with ‘Atelier‘. When people have asked me what I’m playing, I start with ‘Ateli-‘ and have to check myself. This isn’t an Atelier game, not really. Yes, it’s in the Atelier universe – and oh-boy does it have a lot of Ateliers in it. But for the first time in Atelier’s history – Atelier has never been more different.

And yet, inexplicably, for an Atelier game that’s so different, it at once manages to feel comfortingly familiar. Confused? You will be.

See, Nelke and the Legendary Alchemists ~Ateliers of the New World~ (to give it it’s full fancy-pants name) is a game, not about brewing potions and synthesizing items, (although you do do that a lot) but rather a game about building a town. And my goodness, isn’t it lovely! 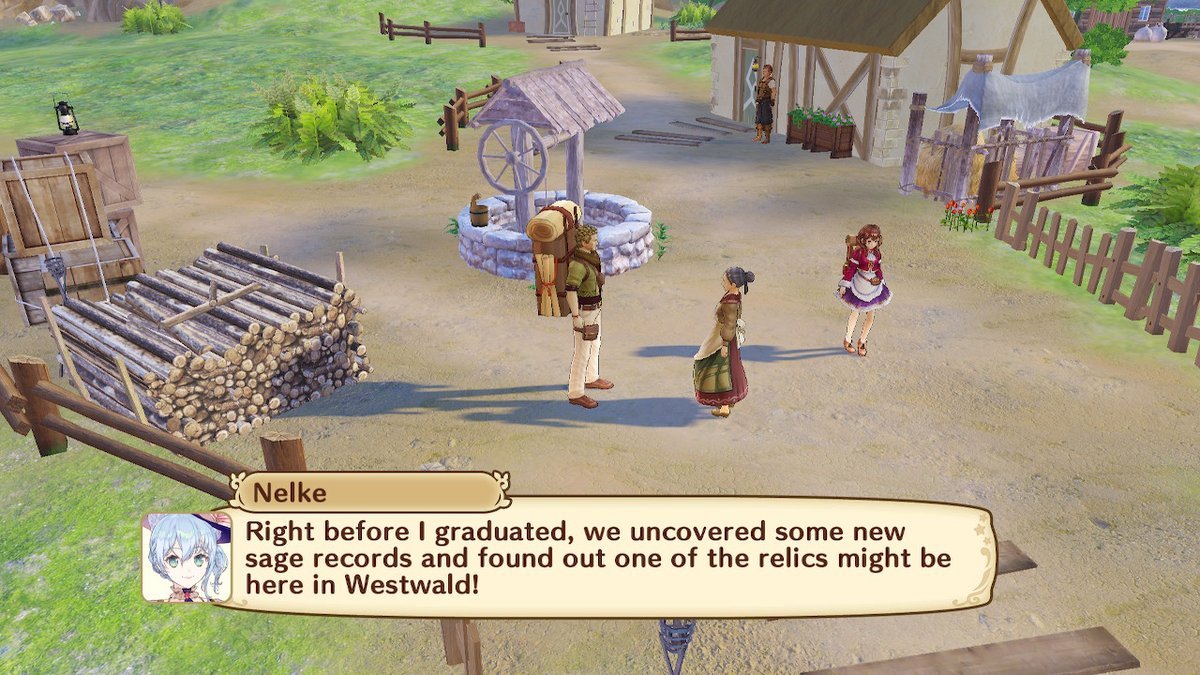 I honestly approached this Nelke and the Legendary Alchemists Review with a little trepidation. I’ve played a lot of Atelier games – mainly because there are so many of them. I’m a sucker for that artwork, always have been – but it’s fair to say something had to give for fear of over familiarity. If you feel the same as I do, then this Nelke and the Legendary Alchemists Review is most certainly for you.

Unsurprisingly you play the part of Nelke who, right form the beginning, confesses she’s a dreadful Atelier. She won’t be Ateliering for anyone. Ever. She is, however, the daughter of a Lord, who has been sent to a backwater town as an administrator. The ‘town’ of Westbald is a curious place in that it has a whopping big mansion, a vegetable patch or two and… er… that’s it. It’s your task as town Administrator to turn Westbald from ‘definitely not a town’ into a ‘bustling city’. 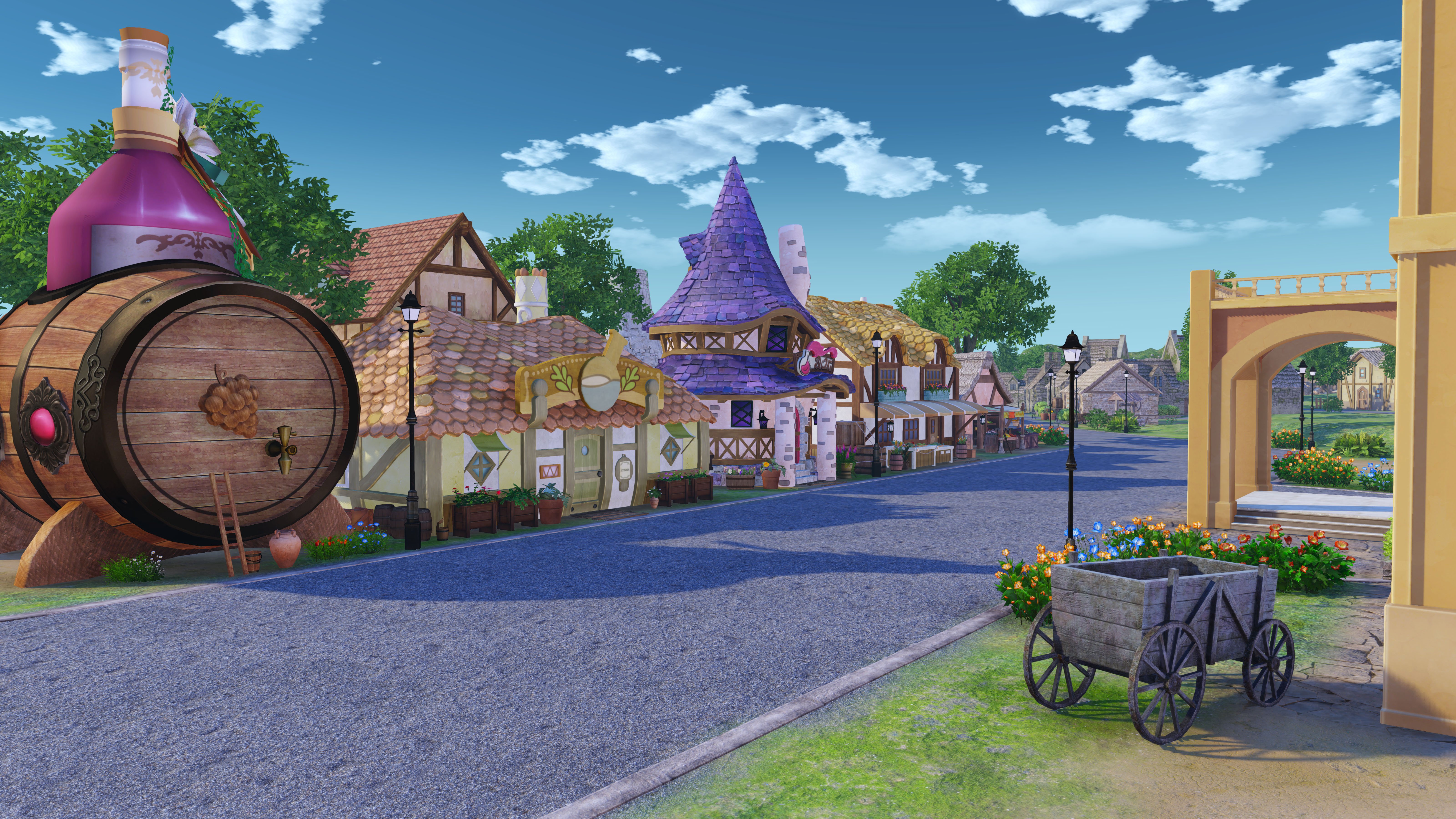 Your time in Westbald is broken up into two phases – Weekdays and Holidays. Weekdays see you doing the busy-work. Building buildings and managing the characters who staff them- as well as their output. This is the basis of your town. The Holiday day sees you chatting to town-folk to raise your friendship levels, watch story scenes and receive requests. On holidays you can also investigate the local areas, collecting resources and doing battle with monsters. 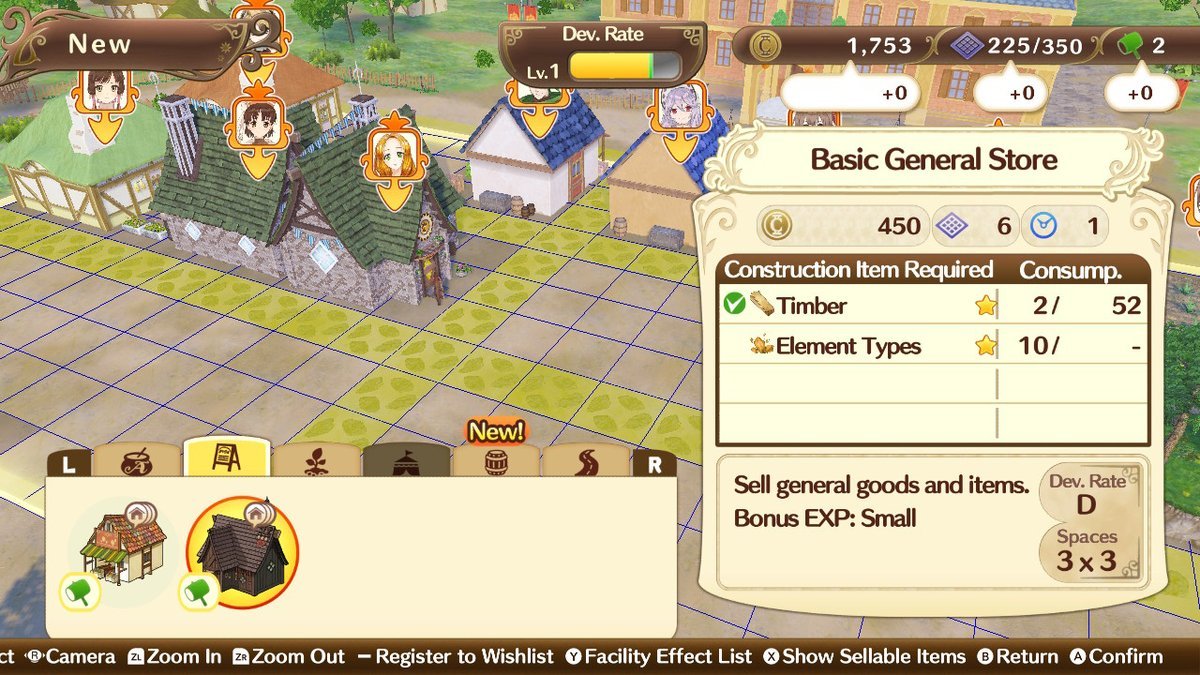 This is the very fabric of Nelke and the Legendary Alchemists. Build buildings, gather resources, to make more buildings – and so your population grows and the utility of your town. Farm patches help you produce crops, crops can be given to the Atelier to turn into useful items and items can be sold in stores for money. Money is used to build your town and so your population grows.

It’s a simple hook yes, but hold on to your calculators folks, because in true Atelier style – shit is about to get complicated faster than you can say ‘Dad, can you help me finish my Economics assignment?‘ 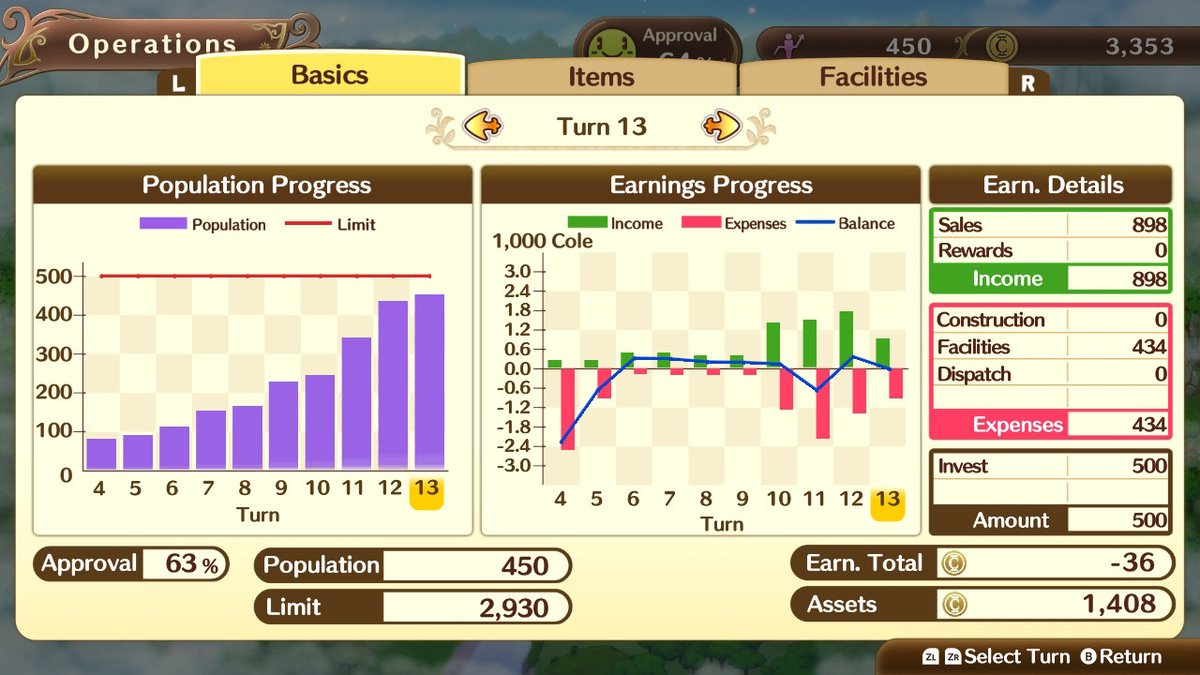 You didn’t think you’d get through an entire Nelke and the Legendary Alchemists Review with it being all sunshine and lollipops did you?

Nelke and the Legendary Alchemists can, as is often the case with Atelier games, feel massively overwhelming to begin with. Very quickly your menus are filled with massive lists of items you have no idea what to do with, or what they mean. Menus hide sub menus, which themselves hide sub menus – and oh man, the numbers? Do you like numbers? Because damn, Nelke and the Legendary Alchemists has a lot of them.

But don’t worry. Just let those numbers wash over you – because while it can be a touch intimidating, Ateli-, Jesus... Nelke and the Legendary Alchemists does a very good job of holding your hand through it all. 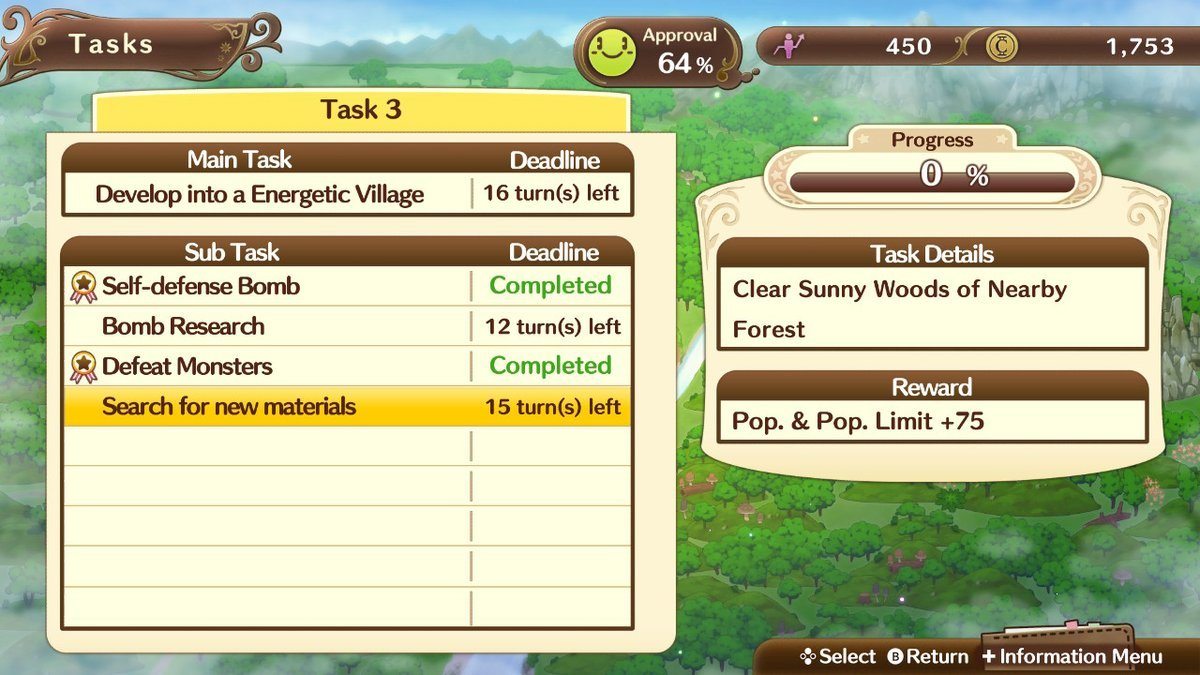 See, while you can, to a certain extent, build your town how you want, the game has structure to it. Firstly Nelke’s father has given you targets – main goals which your town has to reach, like reaching certain size or population. Secondary to this, as your town grows, so do does the character cast – and with them a big long list of requests. Build this building, produce X amount of this crop, sell Y amount of Stock, synthesize Z amount of items.

While there’s a lot of back and forth between menus, swapping out characters in their daily jobs and tasks, and choosing new items to produce – not only does it give you focus, but it also eases you into familiarity with the game’s systems. Once your familiar with the game systems, you’ll find that, often, you begin fulfilling character requests naturally without having to worry too much. 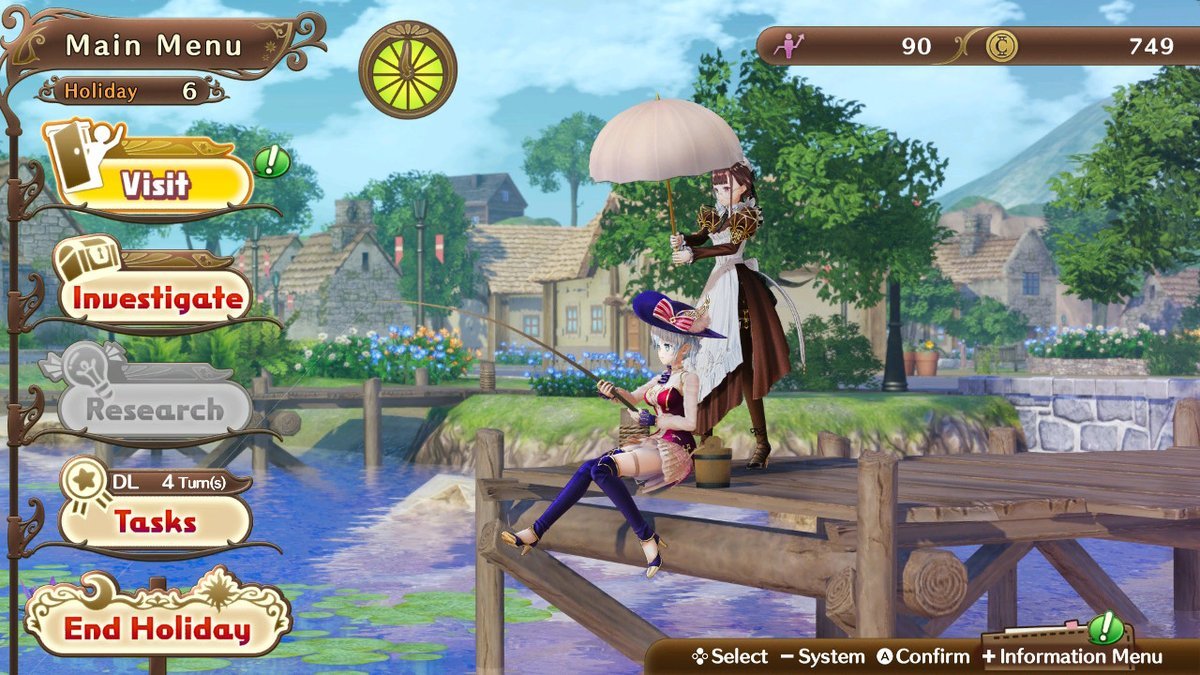 Once you get into the rhythm of the working week, you’ll also start to settle into the oddities of combat. Combat in Nelke is… how can I put it… leisurely. It is the Sunday stroll of JRPG combat. And by that I mean- it is literally a stroll. Combat takes place via the the investigation phase of the game – which only take place on holiday days.

Trigger an investigation, as well as the location you want to investigate, and your team will move from left to right through the area.  There are two speeds which you can toggle -walk and run. Walk makes it more likely that you’ll find resources and points of interest. Run means you’ll reach the end faster – but is also more likely to trigger combat. 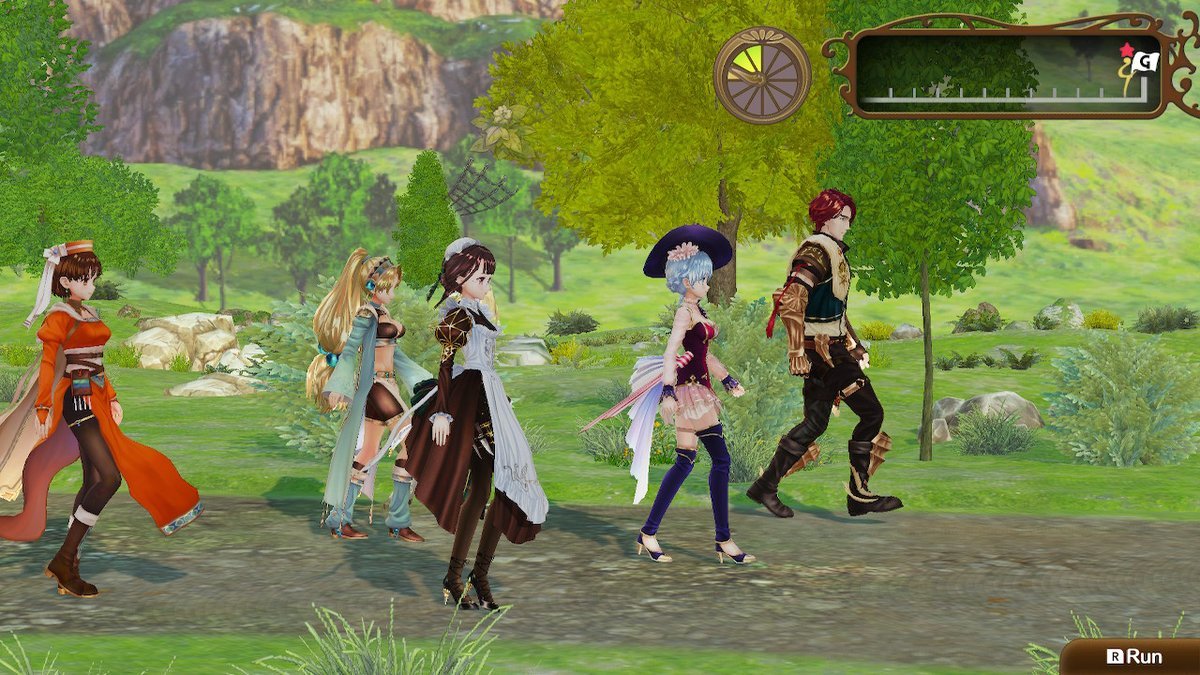 Once in combat there’s a classic action line along the top of the screen which determines character and monster attack order. Each basic attack you execute powers up a characters special attack and, simultaneously, you can also power up your Burst for even more powerful attacks. Early on the combat is very simple, you can set to auto and not worry too much.

Later on though, things get tougher and your choice of team member becomes more important. These are broadly attack and support – attacking characters make up your frontline, and you can choose their action. Support are at the back, act automatically, but have access to the more potent attacks – and these are usually the game’s Ateliers. The longer a battle goes on for, the more likely you get to use your more potent attacks and, ultimately, the more satisfying the combat becomes. 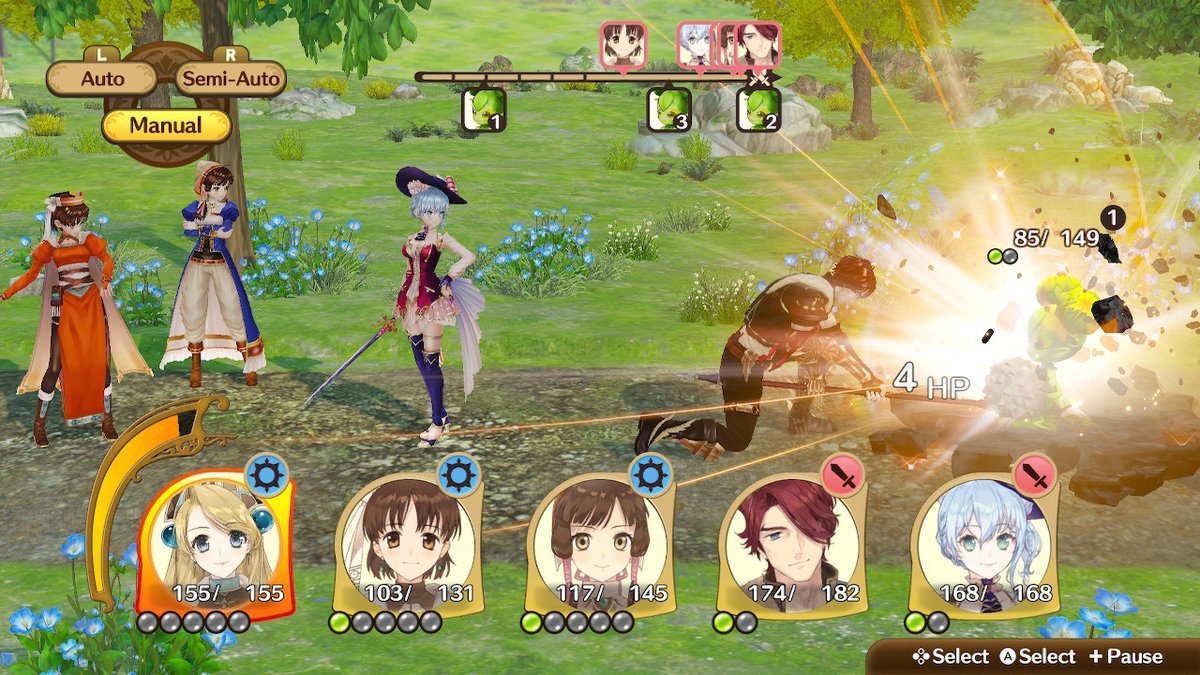 It’s a small thing, but we particularly liked how the holiday day breaks down. You can only have so many actions during a holiday. Visits cost two segments on the action clock, so make three visits (one of the best ways of seeing story skits and raising friendship) and you’ll only have half the day for investigating.

Choosing how to spend your day will have an impact on the investigation. Do you walk the whole route and gather as much resource as possible, or do you spend your day doing visits in town, before sprinting all the way through your chosen route. I really like the balancing act of this, and see-sawing between holiday and workday very quickly evolves into a pleasant rhythm – the gentle heartbeat of the Nelke and the Legendary Alchemists experience. It is, for want of a better word, really nice. 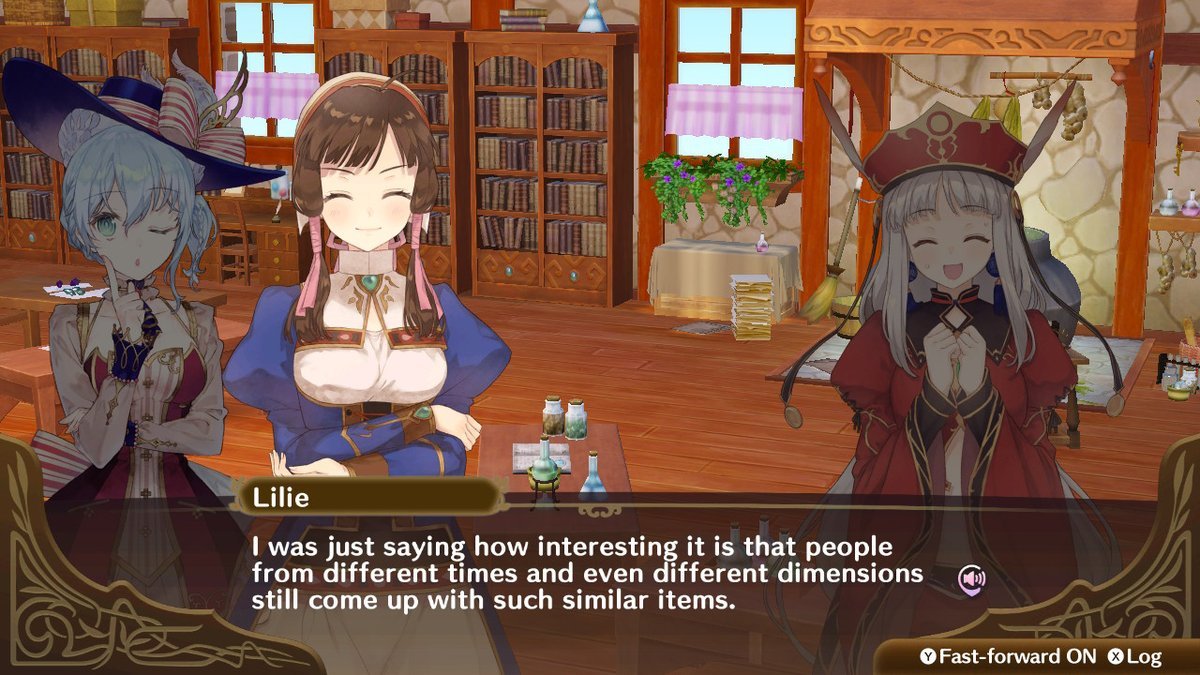 So if you hadn’t already guessed, this Nelke and the Legendary Alchemists review has been very enjoyable for me. While it is a different beast from the normal Atelier games, somehow, somehow it feels very much the same at its core. Time constraints, the need for attention to detail, the sprawling lists that need to be focused into useful items for specific things or jobs – while the task itself has shifted, it very much feel like an Atelier game through and through.

This is helped significantly by the fact that the game is super heavy on Atelier fan service – not the sexy kind, you understand, more that it’s a who’s-who of Ateliers past, and seeing the cast interact (having been sent to what is effectively another dimension) is a lot of fun if you’re heavily invested in the series. If you’re not? Well you can take heart in that characters who would normally be secondary in a JRPG , here have consistently excellent design and fleshed out personalities. In depth knowledge of the series is not a pre-requisite, but it certainly enriches.

All in, and thankfully for this Nelke and the Legendary Alchemists Review – I found it to be a joyful blend of simulation and JRPG that at once will please Atelier fans looking to extend their time in this universe and for series newcomers who fancy a JRPG that offers a genuinely different and challenging adventure. Most importantly though, Nelke continues the series tradition of delivering a world which is so light, so breezy and just so pleasant to be in – the perfect antidote for those of us who like our games to have an altogether sunnier disposition.

If you’ve enjoyed this Nelke and the Legendary Alchemists Review, it can be found here.