The highly-anticipated Netflix’s Castlevania hit the streaming service recently and, at only four episodes long, there’s only a movies worth of content to sit through, but it’s an engaging journey which will leave you eager for more. It certainly leaves itself open for more, and thankfully a second, longer season has already been confirmed for 2018.

I say it’s engaging, because it is, but go in expecting zero closure. You aren’t getting closure here, that’s what the second season is for, and thankfully that’s already been given the greenlight to go forward. What the first season of Castlevania does is introduce you to a colourful cast of characters and introduces the plot.

Dracula, who has a deep hatred for humanity, ends up marrying a human who has incredible science capabilities. When she’s accused of being a witch and burnt alive at the stake, Dracula sets his minions to ravage the world. Trevor Bellmont, who’s family was once known for slaying vampires and the like, sets out to put an end to Dracula’s terror.

All four episodes feel as if they’re setting up something greater, and they only act as a prologue to it all. This is fitting, considering that the first season is a prologue to the Castlevania III: Dracula’s Curse game – presumably, the second season will adapt the game. It’s well-paced and grounded, and its enthralling, brutal action made me wince a little bit at times, but I couldn’t look away.

The atmosphere and world created only serve to make me want more of it, and despite my slight annoyance at only four episodes that feel like a collection of OVAs leading into a proper season, it’s something I undeniably enjoyed. Bring on Season Two! 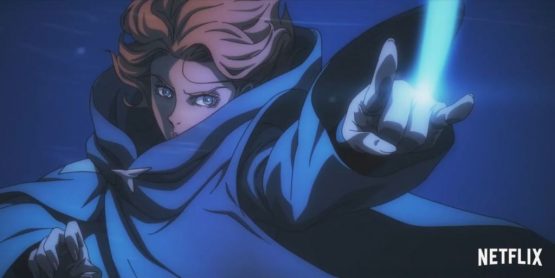 It’s easy to watch Castlevania and assume that it’s an anime produced in Japan, but it isn’t. Powerhouse Animation Studios in the US worked on this, and it’s currently only available in English on Netflix. It looks great and features detailed, fluid animation although I’m sure the budget was completely spent by the end of the four episodes — you can bet that the second season will boast a bigger budget, especially as it’s set to be twice as many episodes! The fear across the nation of Wallachia is potrayed well, and its general atmosphere is oppressive — there’s very little that ordinary humans can do in this situation, after all, and it makes for an intense watch.

There’s some excellent voice-actors on-board including Graham McTavish, Richard Armitage, James Callis and Emily Swallow, and they all do a wonderful job. They sound natural for the characters, and their accents fit in perfectly — there’s some pretty brilliant lines too including “Would you please leave my testicles alone?”. It’s got some good laughs in it despite being quite a bleak show, and much of that is owed to the script and delivery of the lines. The soundtrack isn’t particularly memorable though. 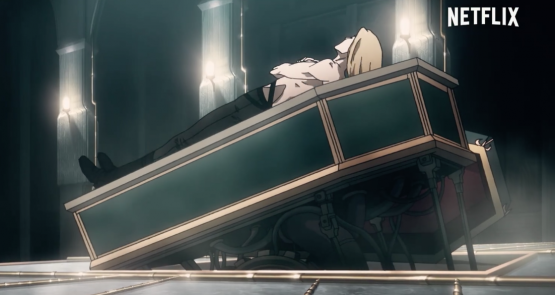 Castlevania is enough to whet your appetite but ultimately left me unsatisfied, because something so good feels as if it comes tot an abrupt end just as soon as it’s getting started. Is it worth a watch? Yes it is, considering that a second season is already underway. I was pleasantly surprised with how much I enjoyed the show, with its only real fault being that it’s only four episodes long.

If Netflix are looking into creating animated original works, then I hope that they’re more generous with budgets in future, because a four episode season with no closure stings a little — I wasn’t aware of a second season as I watched it, so I felt pretty cheated! I’ll definitely be tuning into Season Two next year, though.