Marvelous has released a detailed new DAEMON X MACHINA trailer, which goes into some of the game’s features, including combat basics and customisation. It’s good stuff! Check out the trailer below:

There’s quite a lot to take in there, but the game is looking great in action so far! DAEMON X MACHINA seemed to just materialise out of a Nintendo Direct without any warning way back, but it’s only been getting more intriguing and exciting the more we see of it!

Here’s an overview of the game from Nintendo:

Strap yourself into a fully-customisable Arsenal and prepare for explosive, all-guns-blazing assault in DAEMON X MACHINA, a new breed of mech action game from genre veteran Kenichiro Tsukuda, only on Nintendo Switch.

As one thing falls, another shall rise…

When the moon fell from the sky and rained destruction on the world below, mankind forged a network of powerful machinery, controlled by a sophisticated artificial intelligence, in order to help rebuild all that was lost.

But now, the spread of an energy called Femto has corrupted these once-subservient machines into a dangerous and merciless enemy known as Arms of Immortal, and humanity finds itself in a desperate battle for survival…

In the midst of the chaos, powerful individuals emerge, seeking to harness the power of Femto energy for themselves. To fulfil their goals they recruit the help of Outers – humans who obtained strange powers from the spread of Femto, finding themselves outcast from society as a result and who now work as guns-for-hire.

As a skilled Outer, pilot your very own weaponised suit known as an Arsenal, lead the fight against the Arms of Immortal, and discover the truth behind the all-consuming war that rages across the land.

Mount your Arsenal and vanquish the enemy at all costs in action-packed, objective-based missions. Patrol the skies and unleash hellfire from above with heavy-duty, shoulder-mounted weaponry, or descend to ground level to face enemy combatants in one-on-one melees.

Forage stronger armour and tear more devastating weaponry from downed enemies to augment your Arsenal’s capabilities on-the-fly. A new level of customisation freedom allows you to seamlessly switch up your tactical approach mid-battle, so you always stay one step ahead of your opponents.

You can also upgrade the abilities of your Outer – such as movement speed and jumping ability – and learn entirely new skills, which will all be reflected in the performance of your Arsenal, too.

Anytime, anywhere, with anyone

Don’t let up! Wage the war against the machines wherever you go, thanks to the versatile play modes of Nintendo Switch. Local and online co-operative multiplayer modes let you team up and take the fight to the enemy, no matter where you are! 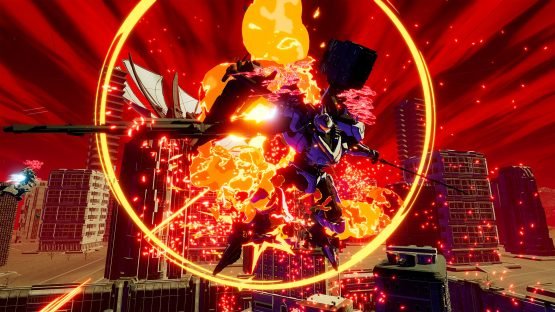