In otome visual novels, I recently found a genre that I genuinely enjoy and just want to play more of, and more of them being available to me was always going to be a plus with me. This is especially the case with any that were coming to the Switch as the portability option is just such a huge bonus with games like this. So, I was pleased to hear that Nightshade is coming to the Switch in Japan on December 20th this year.

For those that aren’t aware of the game, Nightshade is a romance visual novel game made in collaboration with D3 Publisher Otomebu and Red Entertainment, two companies known for their creative range and production of heavyweight visual novel games. Character design and illustrations are by the popular illustrator Teita, and the romance in the game revolves around Ninjas who have lived through the Sengoku Period. 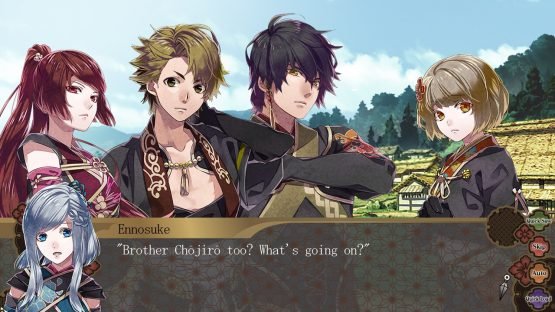 The main hook to the story of the game is that it might be fiction, but several characters and events are factual, making the novel enjoyable for those interested in Japanese history. There are two endings for each of the 5 main characters depending on the route the player takes. The ending movie and music changes according to the final outcome of the players choices. It has also been confirmed that this release will have Japanese, English and Traditional Chinese language options.

Nightshade is out for Nintendo Switch in Japan on December 20th 2018. Are you interested in this title? Do you think that you might import it like we very likely will, or wait for a Western release? Let us know in the comments, or on Twitter, and check back with us for more coverage of visual novels and other Japanese titles.

Our Guide To Otome Games
Recommended Products from our Store: