One Punch Man: A Hero Nobody Knows Interview – Yahata-san On How Long It Took To Balance Saitama

One Punch Man: A Hero Nobody Knows had a real challenge to overcome during its development, that of its main character being too powerful. How on earth do you have Saitama in a balanced fighting game? I got to chat with producer Yashiro Yahata about just that, and more.

One Punch Man: A Hero Nobody Knows Interview

Rice: So my first question is more of a statement, thank you for adding Mumen Rider to the game, he’s the best character! How do you go about choosing who to add to the game?

YY: Well this game is based on the first season of the anime, so we chose characters from that season that were particularly popular with fans.

Rice: So you obviously have the problem of Saitama being too strong, I love the mechanic you’ve gone for with Saitama appearing late, was that a big challenge for the team?

YY: It took quite a long time to come up with that! I think probably half the development time we were still going through a process of trial and error. We did think a lot about how to keep Saitama’s strength whilst at the same time making him work in a battle situation. When we started development we did have an idea to use a cost based system to choose characters but then we thought you may end up always using the same character.

It happens in the anime as well actually, Saitama in particular and the other strong heroes are not always there from the start, and the weaker heroes are struggling and THEN they show up – and that’s where we got the idea from.

Rice: Do you think the better players will prefer to take 3 full characters instead of 2 and Saitama?

YY: I think playstyle is going to be very important. One strategy could be to beat your opponents 2 characters with your 3 characters before Saitama shows up but I hope that players are going to try out different strategies and work out what’s best for them. 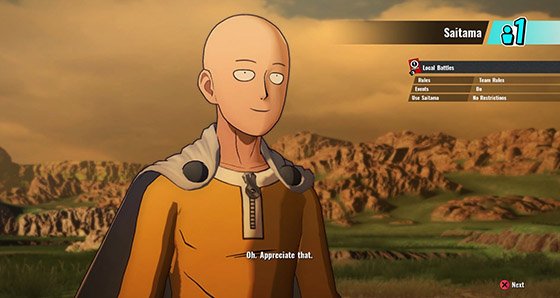 Rice: If I have Saitama on my team, is there something stopping me running away and blocking until he appears?

YY: You can run away to an extent, but that will use up your stamina. The way it’s set up is that you can dash towards your opponent, so it will be hard for them to run away.

Rice: How do you balance an S class hero and a C class hero so that it’s a fair match?

YY: There are actually 2 ways in which this game is balanced. In Story Mode, the heroes have the strength that is determined by their rank in the anime. But then in battle mode, all the characters are balanced in a way that it’s a fair fight, except Saitama!

Rice: If you could have any guest character from any manga or anime, who would it be?

YY: Difficult question! There’s so many it’s hard to pick one! Saitama is just so strong I’m sure lots of fans are wondering who would be stronger, ‘Thanos’! I think it’s something that a lot of fans are interested in but it’s a tricky one, it would be hard to get him to fight other characters.

It’s interesting that half the game’s development time to figure out a mechanic that would allow Saitama to be balanced, it’s clear that the team really cares about the property and wants to make the best game possible whilst staying true to the source material.

One Punch Man: A Hero Nobody Knows Gameplay Preview

How would you balance Saitama?