Details on what would be included in the paid Nintendo Switch online service have been vague. Just like the still non-existent news on a Switch Virtual Console. It seems it was even vague to Nintendo, as they’ve pushed the paid launch back from Autumn ’17 to 2018, and revised how you’ll get “classic games” on that service.

Here’s a chart from Nintendo on what exactly is being offered as part of Nintendo Switch Online: 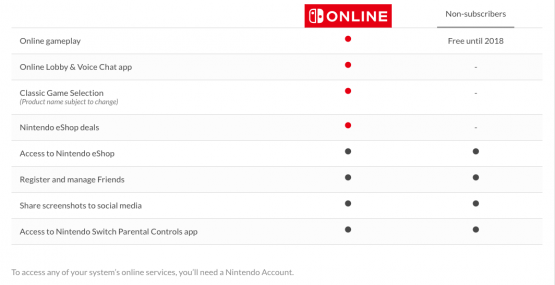 Really all you get then are online features, “eShop deals”, and access to “Classic Game Selection (Product name subject to change)”. Not exactly as catchy as Virtual Console, is it? Previous information had implied this would be access to one game a month for that month only before it was switched out, but it now appears Nintendo have revised what the Classic Game Selection will be, along with pushing back the paid service’s launch.

Nintendo have clarified what this will include to Kotaku: “Nintendo Switch Online subscribers will have ongoing access to a library of classic games with added online play. Users can play as many of the games as they want, as often as they like, as long as they have an active subscription.”

It’s still a bit confusing what this means for the Virtual Console, and whether 2018 will be the first time players can enjoy classic Nintendo games on the console. Considering there are already many high quality NEOGEO retro ports on Switch, it seems a bit odd that Nintendo are lagging so far behind when they themselves have such a stellar back catalogue. Perhaps E3 will shed some details.