You might want to sit down for this one. Last week, a reliable source informed me of a new game he heard was in production – a collaboration between two devs he knows I am a huge fan of. I asked him for a little more clarification, and this morning he came through. That game, judging from the photo he sent, is Project Rap Rabbit.

At present this is the only information I have on Project Rap Rabbit. Anything additional in this post, other than the image below, is opinion and guesswork on my part – so feel free to infer as much or as little from this leak you please.

Regardless, if genuine (and I have no doubt that it is) it signifies the coming together of two of the finest, most influential rhythm action developers in existence – NanaOn-Sha and iNiS. 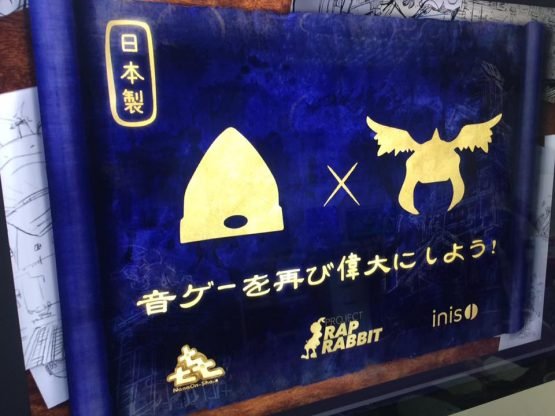 Just in case you hadn’t noticed already, the main image itself is the beanie from PaRappa The Rapper crossed with Gitaroo Man’s hat. Underneath that are the words “Make rhythm-action great again!” Elsewhere, in the top corner, the text reads “Made in Japan.”

Whether this implies that Gitaroo Man and PaRappa will be in the game, I’m not sure. It could simply be hinting at the involvement of those games’ creators – Masaya Matsuura and Keiichi Yano. A proposition which, if you’ll indulge me, is positively orgasmic in its potential.

The coming together of the PaRappa and Gitaroo Man geniuses? This is what DREAMS are made of!

Given that PaRappa is a Sony-owned property and Gitaroo Man was previously a Koei game (not to mention the Project Rap Rabbit logo at the bottom of this image) my money would be on this being an entirely new project and collaboration.

A collaboration that is mouth watering indeed, as both companies have a great track record, not just for their most well-known, iconic releases, but also with the likes of Vib-Ribbon and Osu! Tatakae! Ouendan.

The line that really intrigues me in all this, however, are the words “Make rhythm-action great again” – which in itself is implying that the rhythm-action scene really isn’t that great at the moment.

In some ways I’m inclined to agree. While I still very much enjoyed the likes of, say, Amplitude, or Thumper, or Sega’s Hatsune Miku releases, there really hasn’t been anything which has captured the old magic of NanaOn-Sha’s and iNiS’s most creative output. Something that this very site touched on recently with Holly Williams’ excellent Gitaroo Man retrospective.

I sincerely hope Project Rap Rabbit, whatever form that may take, takes cues from PaRappa, Gitaroo and Ouendan before it, by putting as much emphasis on narrative as it does on physical precision. Story is so lacking in the genre these days and I’d very much welcome seeing it make a comeback.

Needless to say, I have reached out to both NanaOn-Sha and iNiS for comment on Project Rap Rabbit, and will update further once I hear anything.

In the meantime, I’d like to share with you my TOP FIVE rhythm action moments from these two great companies, not least so you can remember just how INCREDIBLE Mastuura-san and Yano-san really are!

(*sniff* Gives me the feels every time, man… *wipes tear*)