Ni No Kuni: Wrath of the White Witch Review (PS3)

When JRPG giant Level 5 and talented film maker Studio Ghibli team up to create a game, you know it will be something special. Thankfully, Ni No Kuni doesn’t disappoint, delivering an experience that manages to feel fresh even if it follows many old JRPG conventions.

We first meet the game’s protagonist, Oliver, in his hometown of Motorville. While everything seems peaceful, naturally things start to go wrong. Oliver’s mother saves him from a near fatal accident, which in turn takes her life. Stricken with grief, Oliver meets the Lord High Lord of the Faeries Drippy. Drippy explains that there may be a way to save Oliver’s mother by finder her soul mate within Drippy’s own world. Thus begins Oliver’s journey into another world, marking the start of Oliver’s progression from naïve boy to powerful wizard. 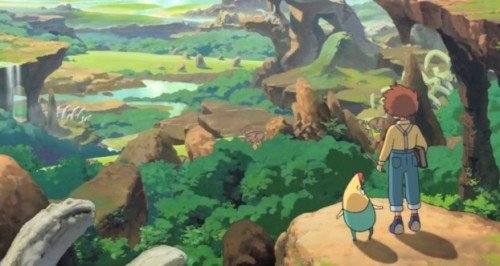 While Oliver is also tasked with saving this new world, the main focus of the story is his attempt to save his mother. As Oliver makes his way through the world, he slowly start to gain confidence thanks to the people he meets and his experiences. His story is truly touching, and I wanted to make sure that I saw it through to the end.

If you’ve seen screenshots or videos of Ni No Kuni, you’ll agree that it looks amazing. Each area has been lovingly crafted, with environments and characters being some of the best I’ve seen on consoles. The admittedly small amount of hand drawn cutscenes are beautiful as well, which are on par with their theatrical works. This is all accompanied by an amazing orchestral soundtrack, which is just as impressive.

Of course, graphics and sound can only take a game so far. Without some of the interesting gameplay features that Ni No Kuni introduces, it wouldn’t be so fun to play. Battles take place in real time, with each playable character having the ability to summon familiars that fight for them. The familiar system is similar to Pokémon, with the player having the ability to tame familiars and use them during battle. Familiars are also able to undergo metamorphosis, where they change into  more powerful form at the cost of being reset to level 1. Add in the ability to feed familiars stat boosting food, and you have an area of the game you can spend many hours on alone, trying to breed the best familiars. 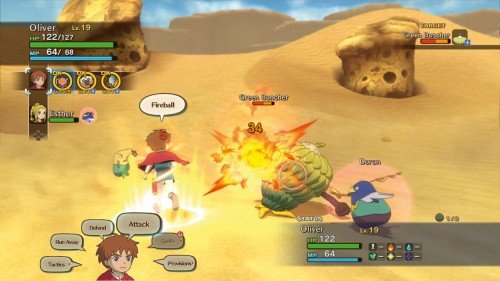 While each fight plays out in real time, attacks have cooldown timers that must be managed at all times. This makes the battle system feel more like a hybrid of real time and turn based than solely real time, thanks to the fact that you can’t constantly attack. A further layer is added to battles with the inclusion of ‘glims’, little orbs that con restore health and magic points, or even allow characters to unleash their special attacks. Since HP and MP don’t regenerate after battles, you need to move around the battlefield to keep your party in good shape. It helps to alleviate some of the boredom that may have appeared if all you had to was select attacks without worrying about positioning.

Sidequests are handled in a unique manner too. Completing quests for residents of the game’s world, or hunting special monsters, rewards you with stamps, which can be redeemed for permanent bonuses. These range from the useless (but admittedly fun) ability to jump, to the more useful experience and money bonuses. These add an extra incentive for you to complete sidequests, while ensuring that those who do so are rewarded appropriately. Making sure that you go through Ni No Kuni’s sidequests also helps to keep you at the right level, with grinding otherwise being necessary. 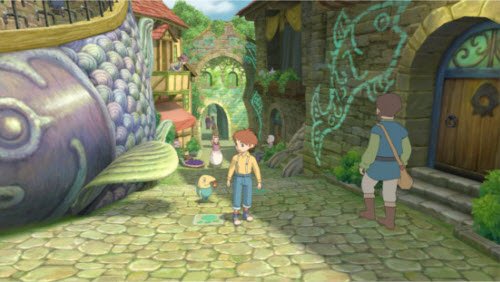 A final mention should also go out to the game’s amazing localisation. While there are a couple of bland voiceovers, the vast majority have been handled well. My favourite (as is many others) is Drippy, who gets many humorous lines and has an amazing Welsh accent. The option to use the original Japanese voiceovers is a welcome extra, but Ni No Kuni is a rare case where I ended up sticking to English, thanks to how well the game has been localised.

Overall, this is a game JRPG and Studio Ghibli fans shouldn’t miss. Featuring the wonderful visuals and fun gameplay that you would expect from such a collaboration, Ni No Kuni manages to entertain throughout its lengthy story, with a whimsical story and enough content to keep fans of either studio happy.

All 21 Studio Ghibli Films Coming To Netflix
Recommended Products from our Store: