I’m in love. Crazy stupid love, with this lovely little card game. Like so many of the games that I fall for – in my heart I know, just know that it’s not particularly good. That there plenty of titles out there more deserving of my gaming hours – and yet, over the past couple of weeks I have played nothing else but Valkyrie Crusade.

Valkyrie Crusade is a free game – you can pick it up via Google Play or App store for Android or iOS. The core game is split into two gameplay types – there’s the Trading Card Game side and then integral to this is a town building metagame. 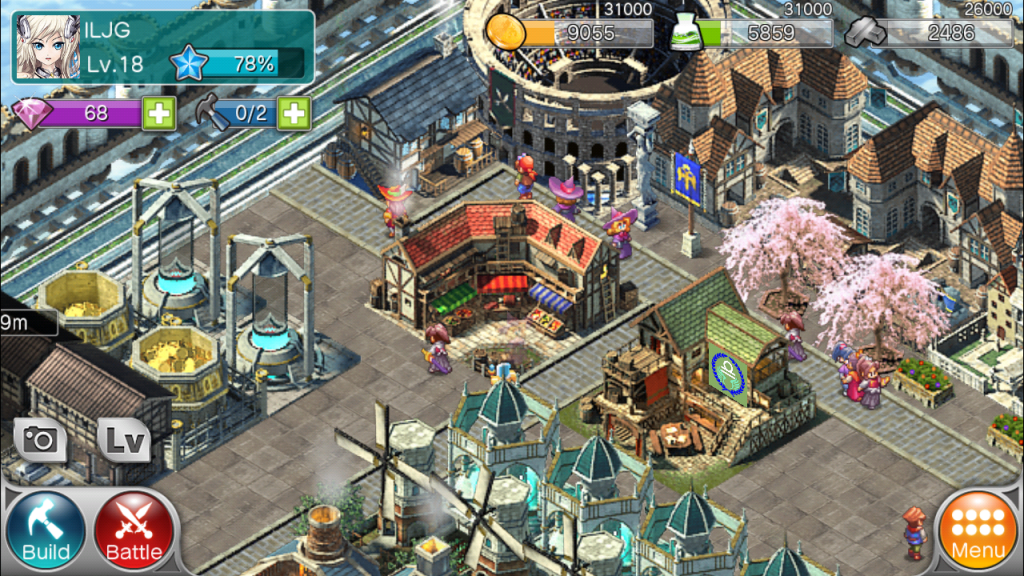 Your town is the engine room to your game experience. Farms, Iron Works and Ether Furnaces’ will farm the main resources you need in the game. These three resources will allow you to build more buildings, make more room in your town, level up existing structures, pay for decorative elements and – more importantly, allow you to power up your cards. Good management and development of your town is absolutely necessary to your success in the card side of the game. 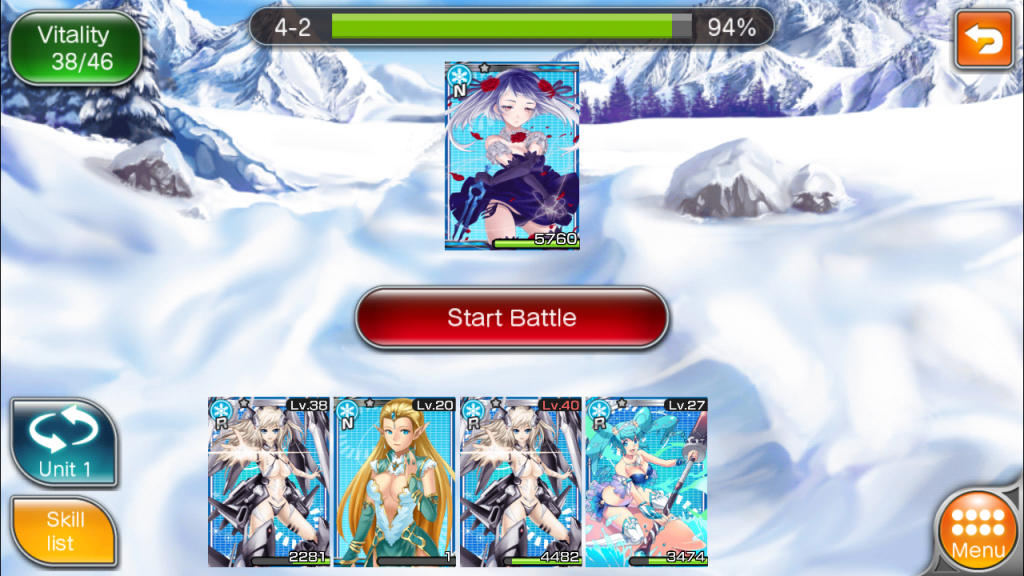 Calling Valkyrie Crusade a ‘Trading Card Game’ in the Pokemon or Magic the Gathering sense would be inaccurate. To start with, you can’t trade cards with other users. You can trade them in-game for currency (money or medals that can  be spend on card-boosting ‘Arcana’) and there isn’t anywhere near the level of strategy and deck building that you’d find in the best of the physical card games.

Instead, this is more of a Collectable Card Game with some very light strategic elements.  All the cards in the game are anime girls, which is what initially drew me to the game if I’m honest – yes, I am that shallow – though they’re not as smutty as that description might lead you to believe – in fact, there’s some really lovely artwork in the game with, of course, the higher level cards boasting the more detailed art. 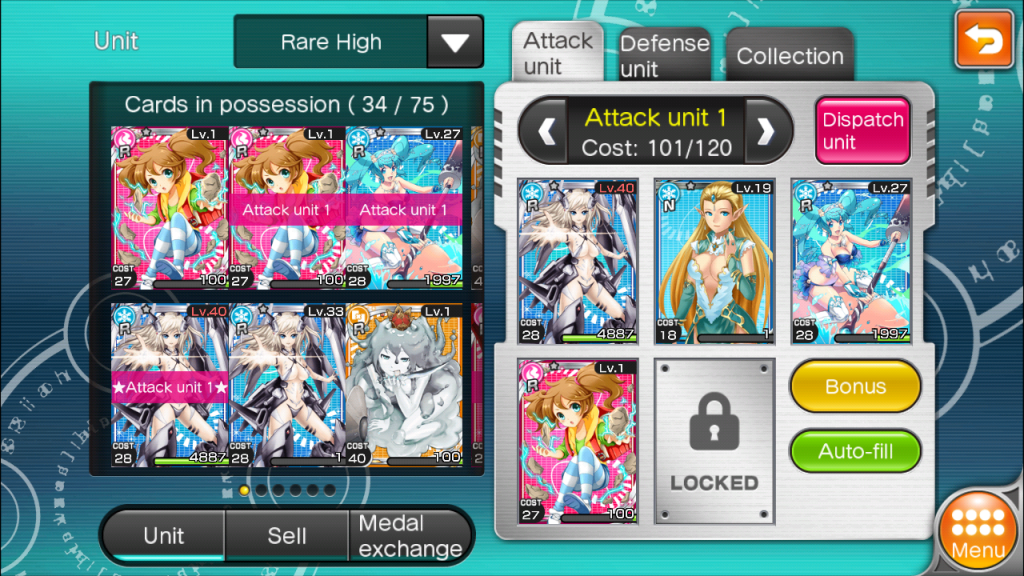 As you play though the game’s campaign mode – you’ll uncover more cards on your journey that you can add to your collection – of which you can only have 75 at any given time. Your actual deck is even more restrictive – it allows you to set up ‘Units’ of three cards (growing to five with the right level building in our town) and you can configure a number of these small units to take into the Campain, Duel or Archwitch battles.

There’s a catch though. You can’t just hit the Campaign breeze though it and collect loads of cards. There’s a limit on how quickly you can progress as vitality restricts how much you can move, and once your vitality is gone you’ll have to wait for it to recharge. You can also battle other users Units for prizes too – but again, once you’ve battled, you have to wait a certain length of time before you can  battle again. 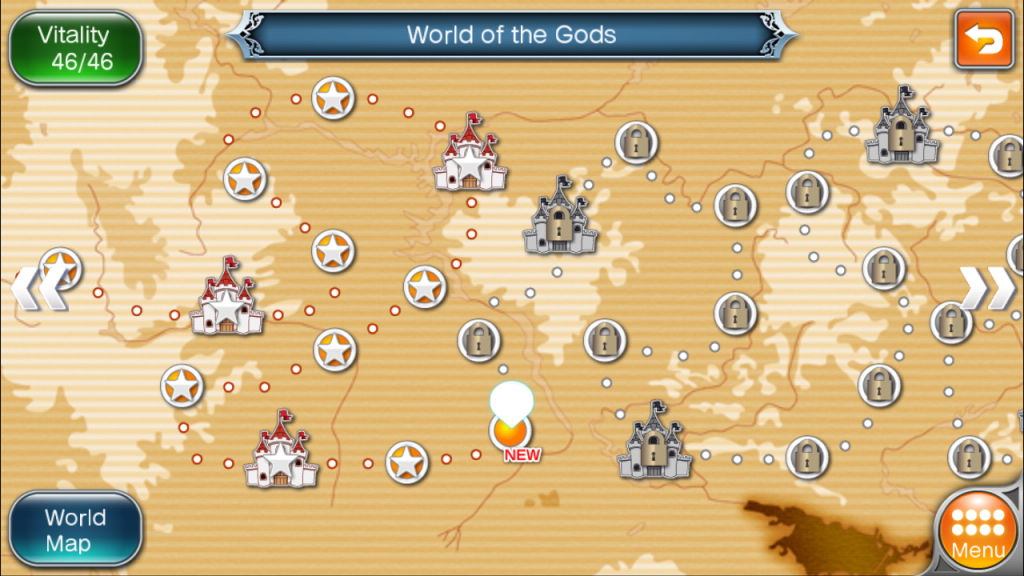 These waiting times can be reduced in the town by building structures that reduce time or increase campaign vitality, and levelling them up will help speed up the process – but as with everything in the game, there’s a limit to how much you can build and level. Levelling your castle might take two days for example, levelling up a farm or resource store will initially take seconds, then minutes – increasing to many hours the higher up the levelling tree you get.

This system of currency and time permeates every aspect of Valkyrie Crusade. Getting more cards for example requites you to ‘Summon’ them – and again, they must be bought using in-game currency. 1000 friendship points will buy you 10 Normal or ‘N’ class cards (with the slight chance of bagging a rare) – and earning friendship points requires you to interact with other users by greeting them, or visiting their towns. 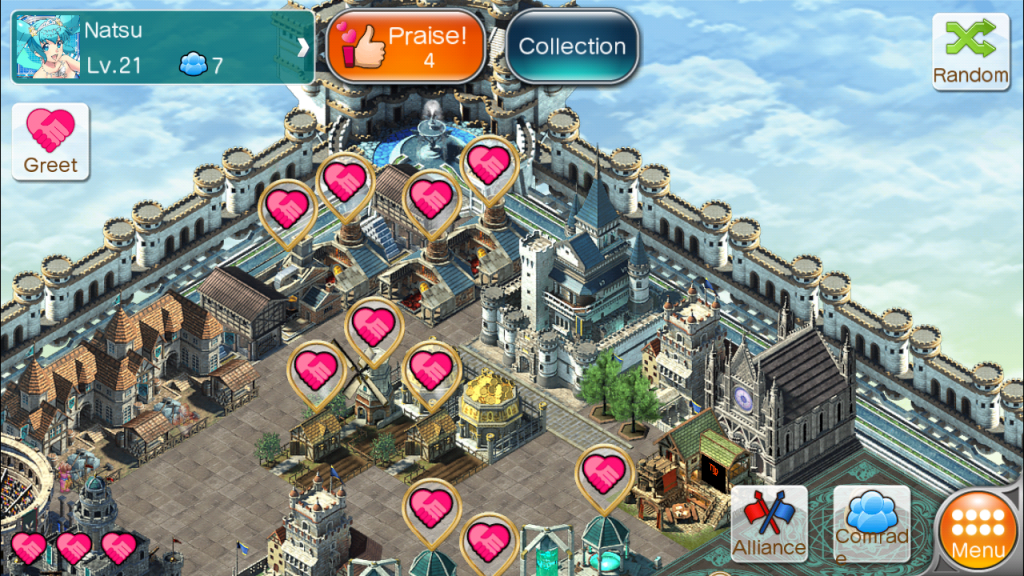 Summoning a Rare or Special Card will require you to spend jewels. These jewels can either be earned by completing quests in game – or by spending real money on stacks of jewels. Ultimately, to get the more powerful cards you’ll either have to earn enough jewels in game (which will take a loooong time) or you have to buy the jewels outright. But it’s not quite as horrendously money grabbing as it sounds, as with a little effort, you can create powerful cards through the game’s in-depth upgrading options.

The summoning of cards is the driving force of your attack power. Cards can be upgraded by feeding them other cards you don’t want – earning them EXP to level up. You can also Evolve cards by fusing them with duplicate cards or, better, Amalgamation allows you to create completely new cards by matching them with another suitable pairing. 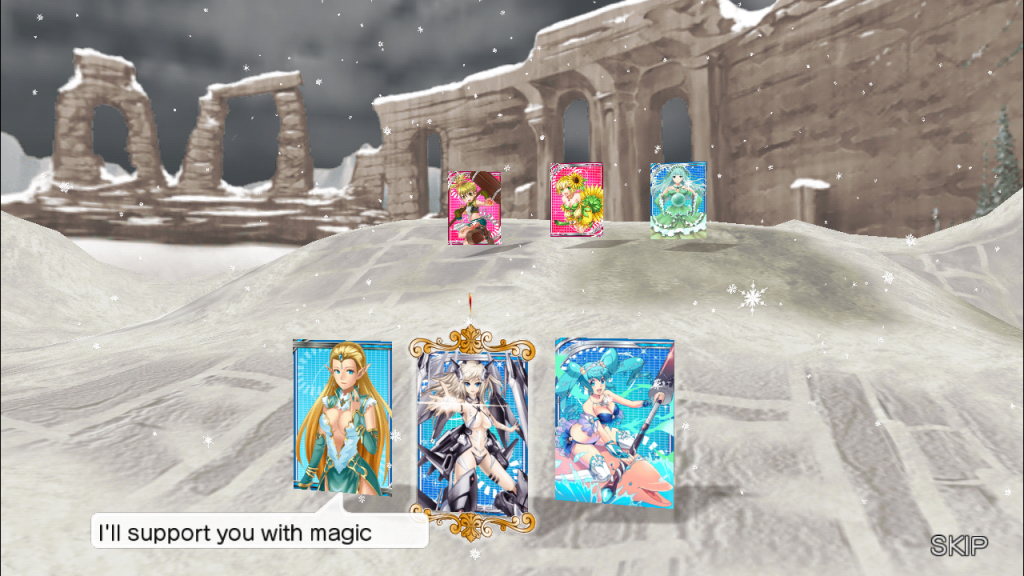 Your chosen unit of cards can then be tried in battle in campaign or duels- perhaps the most disappointing aspect of the game, as it’s fundamentally a case of he-with-the-highest-stats-wins – though there are occasions where your card’s unique special attacks can turn the tide  in your favour.

The shallowness of the battle system isn’t a particuarly big deal however, as the fun, or rather, the most compelling aspect of the game is in levelling your cards, discovering new ones and enjoying the near-constant rotation of tasks you have to undertake.

A days play, with Valkyrie Crusade’s time and currency restrictions, is a comfortingly cyclical affair. Get up in the morning, level a couple of buildings. Hit campaign until vitality drops, take on a few duels to accumulate treasures and perhaps assist in the take down of an Archwitch – the games special high powered cards, which give the best drops but must be subdued alongside comrades you make in game. 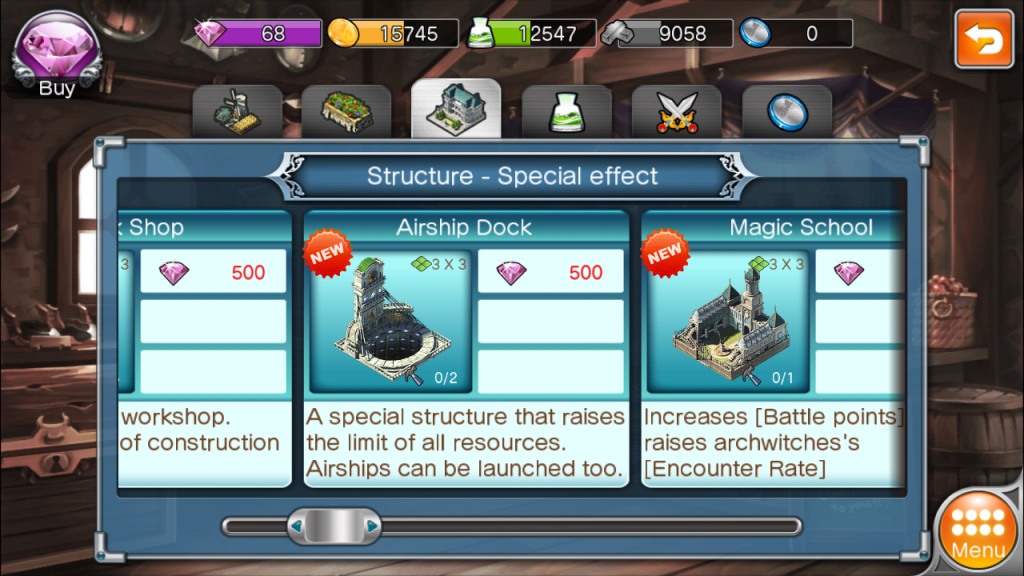 In the afternoon, I’ll then visit my comrades towns to farm friendship points, and then spend those points on summoning more cards to my deck – and then end the days play powering up my favourite cards in my deck, trading in unwanted cards for medals.

This balance of currency, timed events, social aspect and collecting is amazingly well judged – so well in fact that it turns a fundamentally mediocre game into something you just can’t leave alone. When one restriction has kicked in, you simply move your attention to another part of the game and it… well… it’s remarkably addictive. 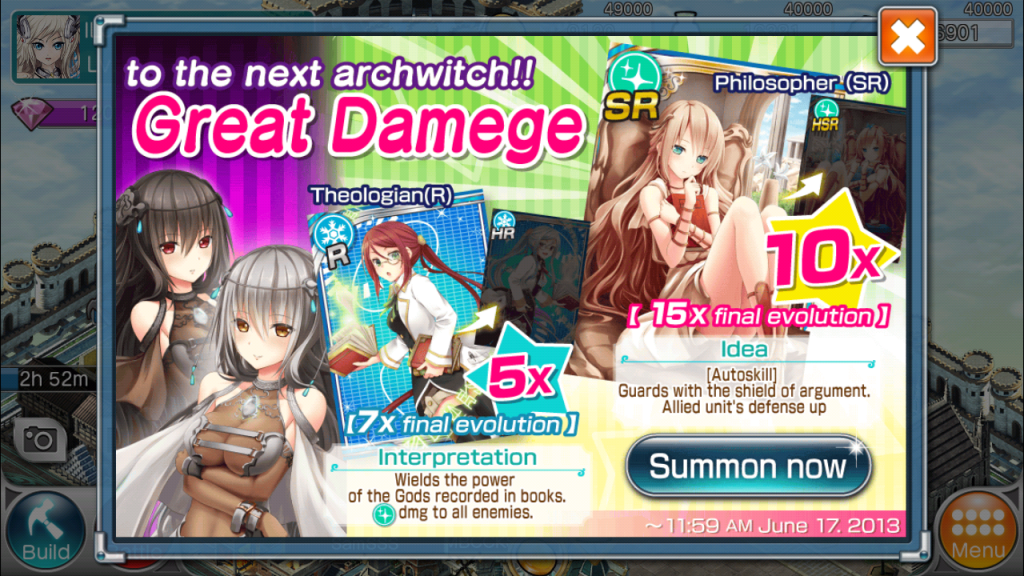 I’d also like to point out that, so far, I have yet to spend a single pound in real money. Tempted, sure – as you always want things faster – but I haven’t found it necessary to spend to maintain my enjoyment of the game. If, as I continue to level and desire more powerful cards or more resources, or faster build times I will perhaps spend a little – but given how many hours of enjoyment developers Nubee have given me for nothing so far, this isn’t not something I’d feel tricked into doing… in fact, I’m more inclined to spend with them simply as a ‘thank you’ to show my support.

Valkyrie Crusade, for a game who’s very survival requires micro-transactions is, alarmingly generous – something that, I hear, is true of their other sucessful card game Samurai Empire, which I’ll endeavour to try on the strength of this.

So, unless you hadn’t already guessed this is one of the nicest mobile game’s I’ve played in a while. It’s lust for your wallet is, mercifully, subdued – or rather easy to ignore and, in Nubee’s defence, offers a huge amount of enjoyment, completely free. So do give it a try, I’d be amazed if you didn’t think it worthwhile.

ILJG runs the I Love Japanese Games Facebook Page.
His views are not necessarily those held by Rice Digital or its partners.