Shiren the Wanderer: Tower of Fortune and the Dice of Fate Review (PS Vita)

Seven years have passed since the last Mystery Dungeon game has hit western shores. Originally released on the DS, Shiren the Wanderer: The Tower of Fortune and the Dice of Fate brings this classic rougelike game to the PlayStation Vita.

In a world where the fate of mortals is decided by the god of destiny called Reeva, most people are content with their life and the fate that is bestowed upon them. Our silent protagonist and his talking ferret, meet up with Jirokichi who is on his way to the Tower of Fortune to save his beloved from an incurable illness. To do this they must first conquer the towers of past, present and future and get the Dice of Fate on the top of each floor to unlock the path to change their fate. 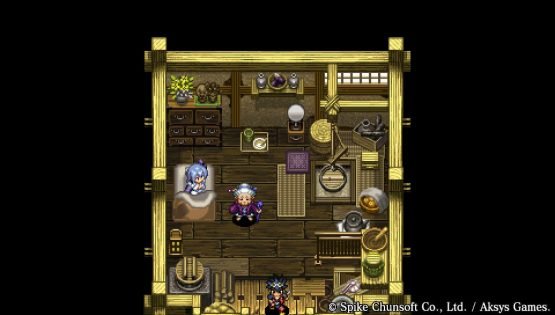 For some unknown reason the west only keeps getting the odd numbered installments of the Mystery Dungeon series. The first game, simply known as Mystery Dungeon: Shiren the Wanderer, was originally released in 1995 for the SNES and was later brought to the west with its DS port. The second game was a Japan exclusive N64 title, while the third came 8 years later for the Wii and PSP.

Shiren is your typical Mystery Dungeon game. You start each dungeon with your character at level 1 and climb random generated floors one by one in an attempt to reach the top. All enemies are visible on screen and move and attack only when you do. This usually means that dungeons are more of a puzzle than a grind.

Since you always start at level one when you enter a dungeon, grinding is a lot less important than weapons, armor and accessories. Every step can be perilous in these trap ridden dungeons, so slow and methodical gameplay wins out in the end. 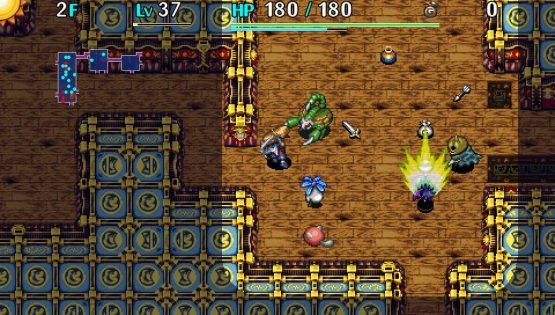 You are not alone in your journey. Aside from Jirokuchi, it’s up to you who you wish to bring with you to a dungeon, making the adventure a feel a lot more personal. You can hire a dungeon guide panda girl and or even get the help from a mystique fox girl.

For a fairly standard rougelike, the few things this game offers really make it stand out from the crowd. Whereas you’d typically have a very limited storage which may grow as time passes, Shiren does this in a much more engaging way. Since your 24 inventory slots fill up very quickly, its pots that add a new dimension to item storing. Aside from having a varied capacity and protecting your hard earned items they also have different attributes. Preservation pots, for example, keep your food from spoiling, while hide pots let you jump in to circumvent patrolling enemies.

Exploring how things interact with one another is a game in onto itself. Almost everything here has multiple functions. The annoying trap that unequips your items can come in handy when you cannot remove a cursed item. Water tiles which might seem like just a differently colored obstacle allow you to fill your jars. Later on you can even use this water to your advantage, throwing it on specific enemies to rust their blades. 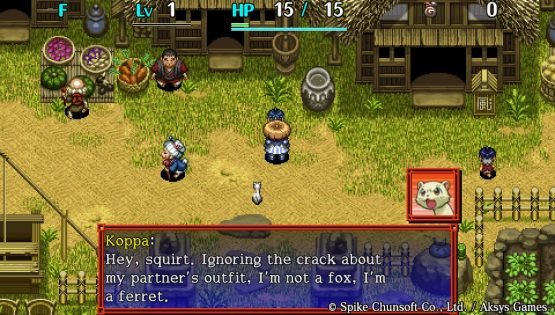 The game also introduces a day and night system later in the game. During the night you can only see a single tile in front of you without a torch, all while powerful creatures roam the map. These one-hit monstrosities wander aimlessly fighting friend or foe. On the other hand, the game lets you use powerful abilities at night, keeping the challenge fair.

Dying can be pretty punishing. While you never actually get the game over screen, the fact that you lose all your items, money, everything you might have fought to accumulate, with no way to simply reload can be a frustrating ordeal. Thankfully the game is never unfair. If you prepare well in advance, stock up on revival grass, equip your best equipment and thread carefully you should make it through any challenge.

For a rougelike game Shiren the Wanderer is very accessible. From the beginning you can play through 50 optional tutorials that cover everything from movement to combining multiple game features. 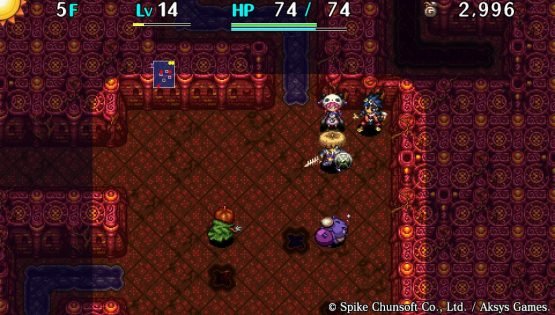 If things ever become too repetitive the game has a few fun breathers. In the town you can visit the dungeon center where you can play a Shiren’s version of minesweeper, Sokoban or just hop into unique dungeons for prizes.

Surprisingly Shiren the Wanderer: The Tower of Fortune and the Dice of Fate features a multitude of online options. If you fall in a dungeon you can wait for another player to throw a healing item at your grave. You can also decide to do the same and get a reward in return. Sometimes you just don’t want to lose one of those items you worked hard on upgrading if you fall in a dungeon. Thankfully you can ask other players to grab it for you and return it for a reward.

Even with the retro-style visuals, Shiren pulls no punches when it comes to the overall look of the game. Every single pixel adds life to the vibrant world. Characters are masterfully animated, from the waving of town flags, to the hopping of your ferret friend, it’s a sight to behold. 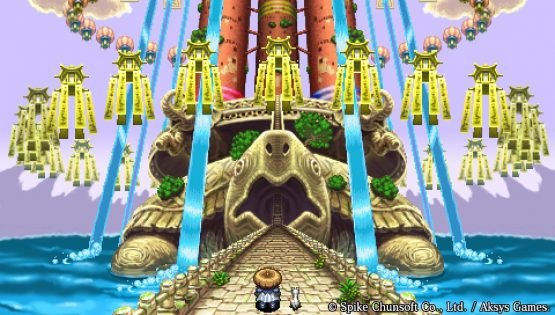 There is truly something remarkable about Shiren the Wanderer: The Tower of Fortune and the Dice of Fate. It offers a generally typical dungeon crawler experience but the way its laid out makes it far more accessible and enjoyable. The occasional hiccup from the repetitive nature of the genre and punishing gameplay which can strip you from hours of effort do little to dull the glimmer of this exciting adventure.