Soul Eater NOT! is my first experience with the Soul Eater series, although the main series is being release on Blu-Ray in October, but I didn’t feel lost and found plenty to enjoy here. Funny, cheerful and bright, NOT!’s characters are easy to love and easy to root for.

NOT! follows Tsugumi as she enrolls into The Death Weapon Meister Academy after she realises that she can turn into a weapon — a halberd, specifically. She makes fast friends with other newcomers Meme and Anya, who are meisters with the ability to wield weapons, and so Tsugumi needs to choose who she’d like to partner up with. NOT! follows the three girls as they make their way through their school lives and training, making friends and getting into outlandish situations, and it’s a joyful, easy watch that I thoroughly enjoyed. That’s not to say that it’s all fluffy slice-of-life stuff, though. 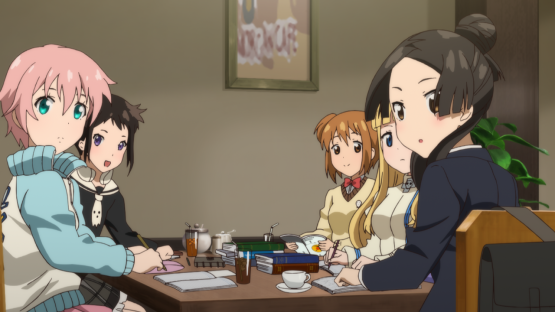 Funny, cheerful and bright, NOT!’s characters are easy to love and easy to root for.

If you don’t enjoy slice-of-life shows, or people have fun, then NOT! might not entertain you until its later episodes. I, however, enjoyed seeing the girls interact and glimpses of characters I’m a little familiar with. They may not play big roles, but fans should be happy seeing their favourite characters pop up every now and then — look, I’ll get to the original Soul Eater series soon, okay?! It’s a mostly light-hearted show which knows how to have fun, and I can sympathise with Tsugumi and her plight in choosing between her two best friends as to who she wants to be her meister. 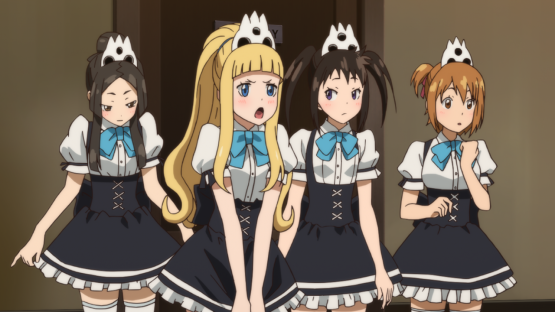 It’s so bright and colourful that it’s hard to not feel relaxed and happy when watching it!

Bones return to animate NOT! – after they animated the main series, and they do yet another spectacular job. Bones are a master of their craft with the likes of Noragami and Eureka Seven under their belt,  and it’s easily arguable that Soul Eater is one of their most popular works. NOT! only spans twelve episodes, but it feels well-paced and ends on a conclusive note. It’s a pleasant watch with some great action scenes and a ton of physical humour, and there’s very little to dislike here. It’s so bright and colourful that it’s hard to not feel relaxed and happy when watching it! 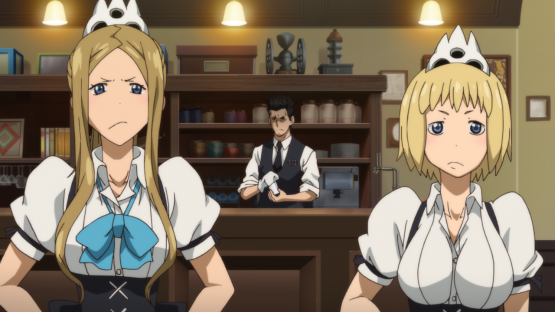 There’s a few familiar voices including Ian Sinclair and Bryce Papenbrook as duo Akane and Clay, with Bryn Apprill, Lindsay Seidel and Alexis Tipton voices our main heroines — Seidel sounds very similar to Christine Marie Cabanos, and for a long time I actually thought it was her! It’s a strong dub with an excellent script and direction, and the performances given are energetic and easy on the ears.

There’s even a fun and endearing series of outtakes where the voice talent mess up their lines! The opening theme, Monochrome, and the ending theme, Yuugure Happy Call, are catchy – I particularly like the opening – and the soundtrack generally impresses. 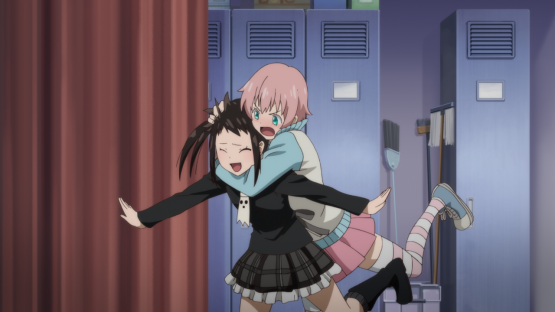 Soul Eater NOT! is based on a short five-volume manga series and although I’ve yet to read it, it’s to my knowledge that it adapts the complete story. It acts as a prequel to the main Soul Eater series, which is also releasing on Blu-Ray soon thanks to Manga UK, so as someone who’s only just getting into the series, I don’t think I could’ve picked a better time where it’s easiest to experience all of it. If you’ve ever been interested in the checking the series out, then this is the perfect place to start.