Soulcalibur III is the best game in the Soulcalibur series. It may seem a little counter-intuitive to claim such a thing just before the latest entry in the series releases, but that’s how we’re gonna go! Think of it as throwing down the spiky gauntlet for Soulcalibur VI to come along and prove me wrong. Remember who you really are! Or something. 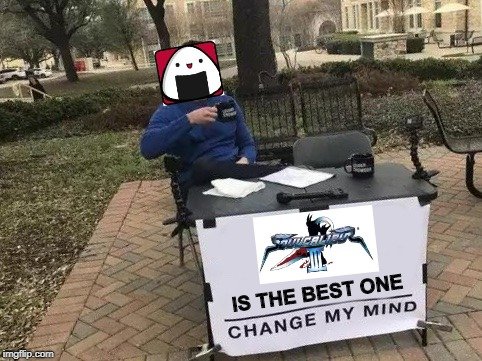 For one thing, this was the first entry where character creation was possible, and Soulcalibur III handles it beautifully. There’s plenty of range when it comes to clothes and hair for your character, and there are even some Custom Disciplines that are reserved for characters made in Create-A-Soul, like Valeria’s Grieve Edge feet-blades, which I would dearly like to see make a comeback. The concept of created character-only fighting styles carried over into Soulcalibur V, where Devil Jin is not playable as a full guest character but can be used as a moveset for your original characters. 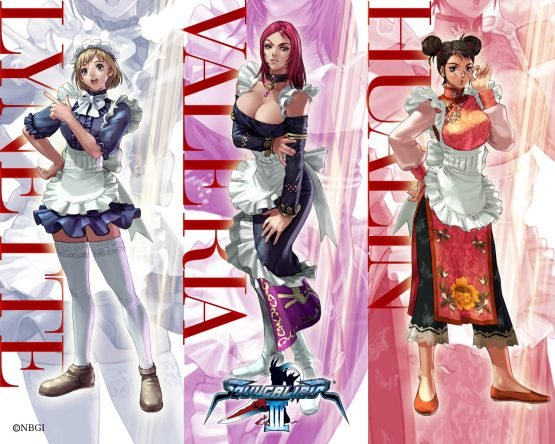 Allegedly, more fighting styles like this were planned, but they sadly didn’t make the cut. They’re a nice way to add some variety without having to drastically alter the moves of previously established and much loved characters, and they make using Create-A-Soul worthwhile. Not that it really needs them as a reason, as it’s a mode weirdly addictive all by itself. The repeating chain of create character, fight, unlock more equipment, create character doesn’t require any reining in. It’s really fun! I haven’t dedicated this long to one specific cause in the game since trying to unlock Amy! 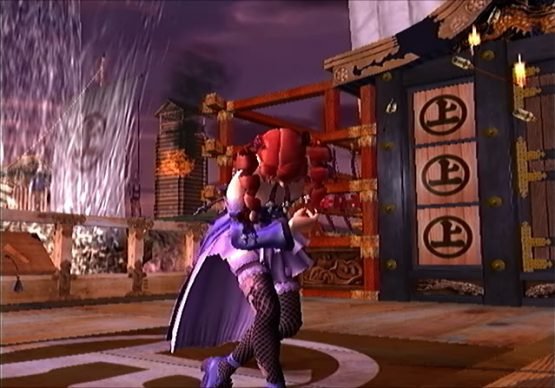 Soulcalibur III also has two story modes – one for playing as the canon characters and all the, y’know, real story, and one where you take one of your created characters into a lengthy series of battles with warring factions and real-time strategy elements expansive enough to make some fully-fledged strategy games blush. Chronicles of the Sword was a perfect way to let players run amok with their own (often ghastly) creations without it needing to spill over into the main plot and mess things up. Other games experimenting with user-created characters take note. I stand by this being the best and only implementation of such a feature that has worked so wonderfully smoothly.

Create-a-Soul is one of the obvious outstanding features brought to the series in Soulcalibur III, but is by no means the only one. Soulcalibur III saw the introduction of multiple great new characters, including Setsuka, and Zasalamel and Tira who have gone on to become series mainstays. Not only did this considerably bulk up the roster’s number, but it introduced a variety of cool new fighting styles and weapons to experiment with and master. Scythe? Check. Giant ring blade? Check. Iai sword style with a blade concealed in a paper parasol? Check! 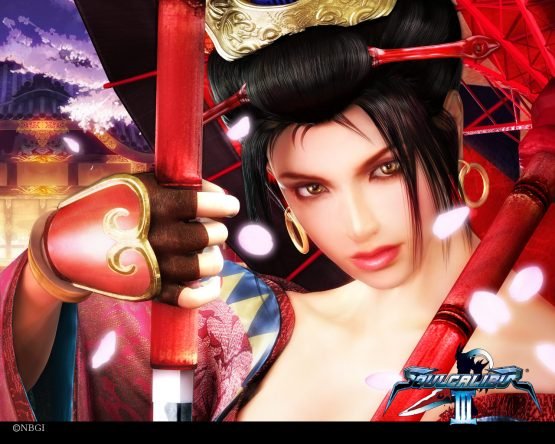 Bring back my girl!

Unpopular opinion though it may be, Soulcalibur III’s use of QTEs was a really nifty touch. Button prompts during cutscenes in the character-focused Tales of Souls mode could influence your stats going into a battle as well as determine such things as whether you got a character’s good ending or bad ending. While there are still some scenes and battles on alternate paths determined by your decisions, it’s relatively nice and simple. At any rate, it’s far from needing a visual novel style route guide, which is more than we can say for some other fighting games that have had a stab at character stories with multiple paths. 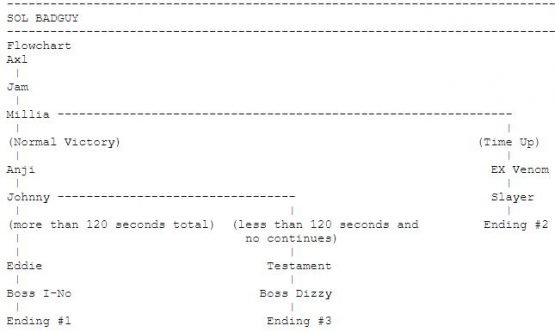 Guilty Gear is guilty as charged.

So, the elephant in the room. DLC. Released back in the halcyon days before DLC had its grubby little fingers all over the entire gaming industry, Soulcalibur III is brimming with content ripe for the unlocking through your own hard work. Racking up enough in-game currency to buy yourself something nice is an element that’s sadly lacking in fighting games these days, but Soulcalibur III had it in spades. So much so it included multiple in-game shops with playable shop assistants. Go big or go home! Give me something to work for! It’s better for a game’s longevity than a bulky, staggered DLC plan and that’s that.

Soulcalibur III had a staggering amount of content, building on the already incredible Soulcalibur II and going above and beyond when it came to new additions. Ever since Soulcalibur III, new features have been less impressive, and many great elements have been removed entirely. Many of the new characters haven’t had the appeal or originality of, say, Setsuka. Algol who? Modes such as Chronicles of the Sword have been removed entirely, as has the entrancing Exhibition Theatre, and the sparse and lacklustre character stories of SCIV and SCV have nothing on the onesin earlier entries. You’d think individual character endings would be a must, not something so expendable! 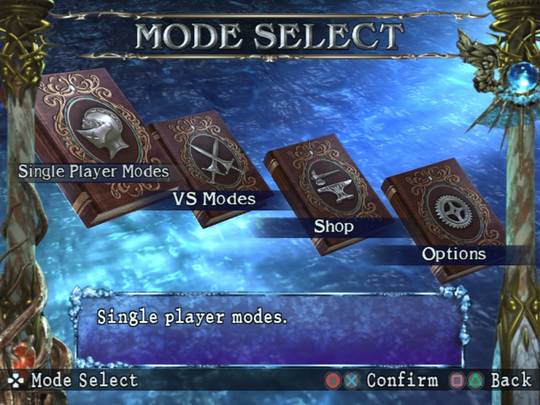 Also, while I can appreciate the removal of some characters in later games due to them no longer being in the story, I’ve never understood why they couldn’t still be included for use in free modes. Soulcalibur V was a particular culprit for this, and while its attempts at replacement characters with the same fighting styles were admirable, they just weren’t up to scratch. Despite its size, Soulcalibur V‘s roster just feels surprisingly small. 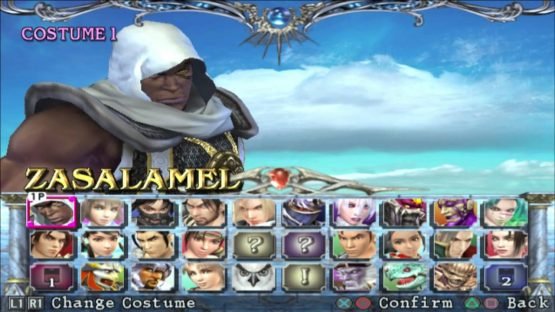 This screen is permanently etched into my brain.

Soulcalibur VI sees us going way back to time of the first Soulcalibur for a fresh new approach to the story. It’s easy to take this as a solution to Soulcalibur V being a dead end in terms of story, as well as just generally a bit of a disappointment as a game. Things were slowly dwindling in the lead up to Soulcalibur V (Legends anyone?) and I’d say Soulcalibur III was probably the peak of the series’ glory before its eventual fall. If Soulcalibur VI can come even close to the splendour of Soulcalibur III, I’ll be eagerly awaiting the series’ continuation in a new direction. I’ll also be playing it forever. I’m OK with that! 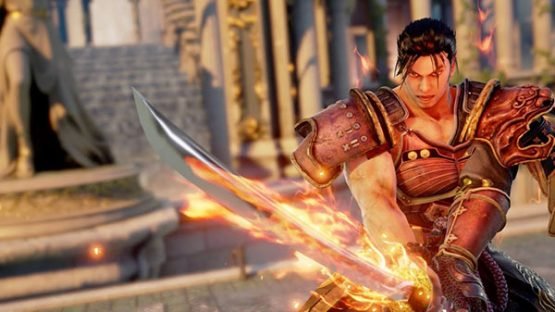 So, I stand by what I said: Soulcalibur III is the best game in the series. For now, at any rate. Hey, Soulcalibur VI! Come over here and change my mind!

Do you agree that Soulcalibur III is the best game in the series or do you think a different one should take that title? Let me know in the comments or on Twitter or Facebook!