OK, so I might have set the bar a little high for Soulcalibur VI, but it’s only because I had confidence that it would be able to meet my lofty expectations. While I’ll still argue Soulcalibur III‘s case until I feel it’s well and truly outdone, I’m pleased to say that Soulcalibur VI is one big, certain step in the right direction and a splendid renewal of the series.

So, yes, Soulcalibur VI is a return to form for the series, and a game worthy to start a resurgence for it, which I hope it does! It in no way feels like it could be the last game when it’s such a shining example of how much more the series still has to give. Every piece of Soulcalibur VI feels like it’s in its right place and there’s very little more that I could ask for. Even less when there’s still more content incoming with the season pass!

Soulcalibur VI is a return to form for the series 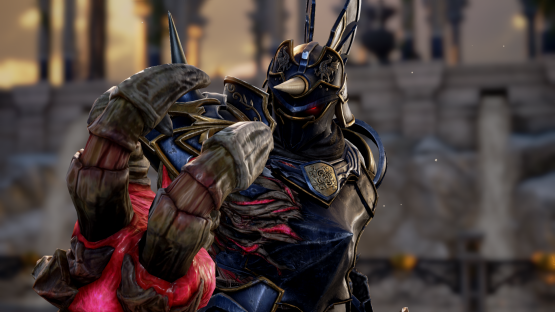 Well, let’s start with the basics. Soul Chronicle is a wonderful new story mode, with each character’s story laid out on an overall timeline of the game so you can see where they correspond with each other and the main story. With around 10 stages or so per character, there’s plenty of time and depth for everyone here.

The timeline menu is a beautiful thing, and one that Soulcalibur could have done with implementing many games ago. This allows you to change between characters’ story lines as and when you like as well as providing a clear representation of where key events happen in the story. It makes the complicated, multi-faceted story of Soulcalibur VI a lot easier to follow and it’s presented beautifully. 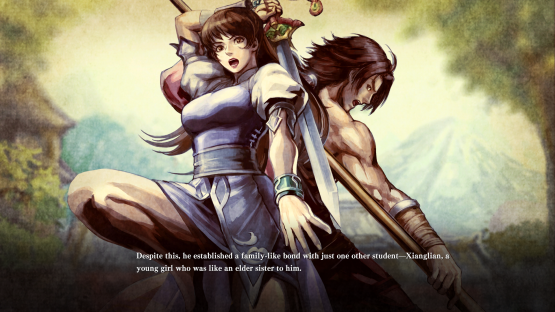 Libra of Soul functions as both the game’s mission mode and a second story mode following a character of your own creation for a fresh, new perspective on events. Libra of Soul is a huge mode with a large amount of both key and optional missions to be done. It’s a far cry from the hefty game within a game of Chronicles of the Sword back in Soulcalibur III though, and, next to Soulcalibur VI’s excellent Soul Chronicle, it just looks and feels a bit underdone.

Still, battles have a variety of different conditions, such as status effects or only specific types of attack being effective which nicely changes up the pace as you go from place to place and mission to mission. Both the key and optional events in Libra of Soul are divided into story chapters and battle chapters, so there’s a good mix of narration in with the strings of battles. Libra of Soul’s story is certainly one of its weaker aspects, but it’s a somewhat interesting addition to the multiple perspectives offered in Soul Chronicle and works well enough as a framework for the myriad missions Libra of Soul mode is really about. 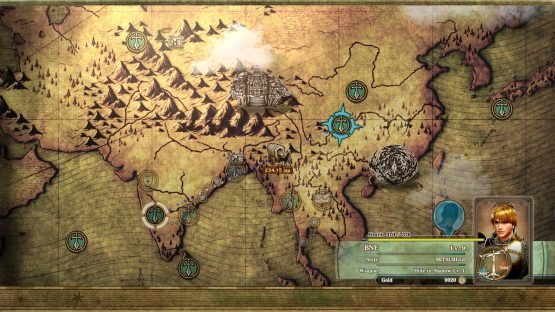 Also, if I keep running into the canon characters so much, why can’t I play as them when we’re working together? The tag-team system used in Soulcalibur IV would have worked wonders here! Instead, Libra of Soul gives you the option to spend your precious gold to hire mercenaries or buy a load more weapons for a chance at changing up your fighting style. Compared with Chronicles of the Sword letting you use multiple created characters as well as ones provided in the mode, it’s kind of poor show. You better really like that character you begin with too because you’ll be seeing a whole lot of them for a long time to come.

It’s enjoyable in its own right, but I can’t help but feel Libra of Soul is holding back somehow, and as such it falls just short of the mark. In fact, I’d go as far as to say Libra of Soul feels a little lost in a game where every other aspect is perfectly sound in both form and function. I’m not really sure what it’s trying to do and I don’t appreciate the hints at bringing it into the main plot. Blegh. 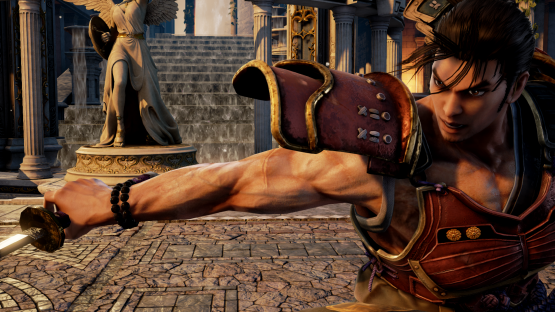 It’s worth it for gap moe Mitsurugi helping you look for astul fishies.

Soulcalibur VI uses a game-wide currency of SP, which can be used to buy further parts for character creation as well as character art and other goodies in the museum. This would be fine if it were more of a return to the shops in Soulcalibur III, but SP’s a real pain to get.

You receive SP as a reward for completing arcade mode, with faster times awarding you more of it. You can also convert gold you earn in Libra of Soul into SP and vice versa. Given that you need gold to get just about anywhere in Libra of Soul, you won’t find yourself rolling in it though, and having to convert 5000 gold as the smallest amount doesn’t help much either. It seems to be a fairly scarce resource for one so fundamental, but I guess it’s good motivation to grind! 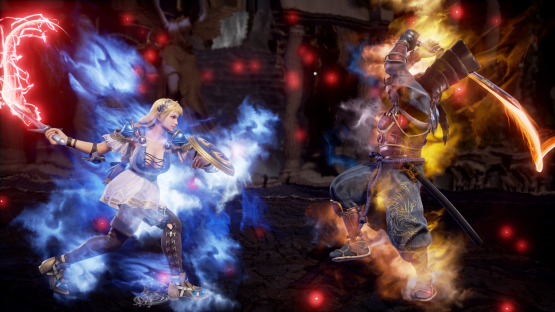 The big change to Soulcalibur VI‘s fast-paced battles is the introduction of Reversal Edge. Reversal Edge is a new mechanic that functions on a beefed up rock-paper-scissors style system. The basics are Vertical beats Horizontal, Horizontal beats Kick, and Kick beats Vertical, but the inclusion of Guard and directional Evades adds even more options into the mix.

When you enter into a Reversal Edge you have to quickly decide which move to use or try to guess what your opponent is going to do so you can counter them. It’s a gamble to use, but it can help change the tide of battle if you find yourself in a dire situation. It’s a good addition and helps change up the flow of combat. It just looks really cool too, with slow motion swings and red lightning. So that helps.

Combined with gloriously dramatic Soul Charge states and the striking Critical Edges introduced in Soulcalibur V, battles in Soulcalibur VI are even more of a spectacle than ever before. It’s a game that makes it easy to look cool, no matter your skill level or character of choice. 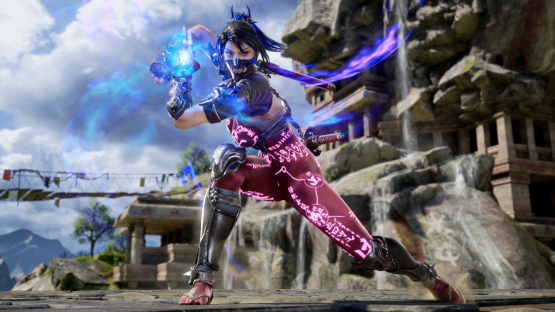 Battles in Soulcalibur VI are even more of a spectacle than ever before.

As well as plenty of nicely done-up familiar faces, Soulcalibur VI has 2 brand new characters added to its roster, Azwel and Grøh. Hello, yes, I’m ready to main Grøh forever. Grøh is such a nice addition to the cast, he feels like he’s been there all along. Azwel is a very interesting antagonist, and his fighting style is very unique too. There’s also The Witcher’s Geralt as a guest character, who feels right at home next to the swords and sorcery of the Soulcalibur universe and being able to use his swift sword and magic fighting style for custom characters is a very welcome addition. 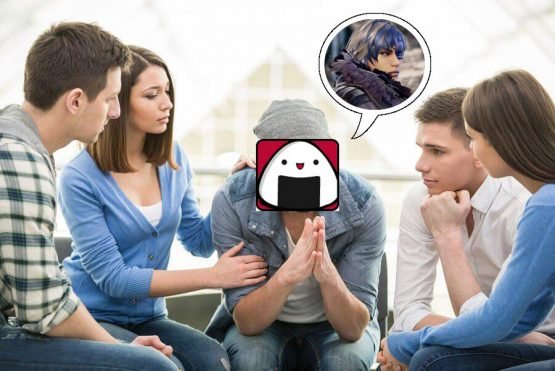 This is an intervention I would fully deserve.

When creating a character, you now 12 race options to pick between, each with their own unique visual traits. This is an excellent addition and one of the biggest changes from more recent incarnations of the mode, however, the number and scope of items you can use in Creation is somewhat limited compared to previous instalments. It’s nice to have parts from the main characters available again, but these are largely in one piece or unable to be used with most other items.

For example, Sophitia’s gorgeous costume could easily have been a top and a skirt, rather than one undergarment you’re not able to layer with. The character creator doesn’t feel quite as full as it ought to, but what’s there is still very lovely, and it’s easy to get creative and make something weird and wonderful. Hopefully, the additional packs in the DLC will help to flesh it out a bit further as well. A lot of the issues with clothes not fitting well have been toned down this time around too, which is great to see. 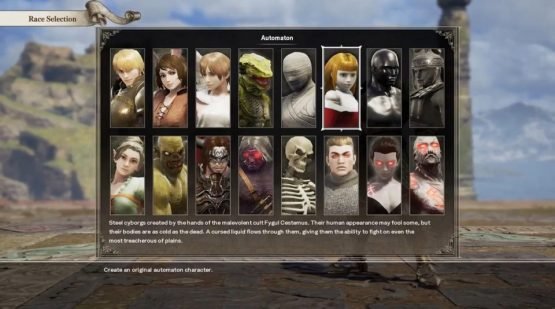 It’s all Stage 2 Malfested, all the time. They look so cool!

Both Soulcalibur VI’s story modes use beautiful, emotive portraits of the characters to tell the story. This style is both more engaging and effective than Soulcalibur V’s sepia animatic style and the kind of visual delight I expect from Soulcalibur. Real attention has been paid to making Soulcalibur VI look as good as possible in every aspect of the game’s visuals. Not only are the graphics gorgeous, but even the game’s UI has a sleek and refined look to it. Similarly, the soundtrack offers a nice mix of old favourites in new arrangements and striking new compositions.

Stepping away from Soulcalibur VI as a long-time fan of the series for a moment, it’s a worthy contender with many of this year’s best fighting games and its fresh take on the lore makes it an excellent starting point to the series. Its accessibility should help bring the series not only to new consoles but to many new fans who can fall in love with Soulcalibur through Soulcalibur VI as a wonderful gateway. 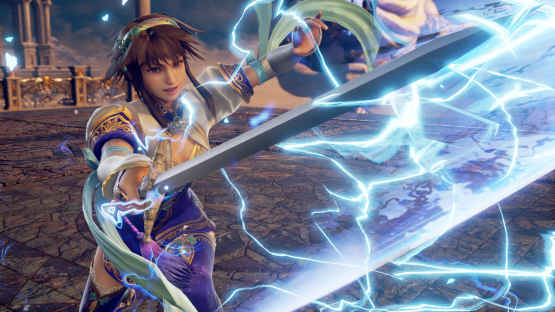 A great game through and through.

So much care has been put into both the new and old that Soulcalibur VI brings to the table. While there may be the odd wrinkle that could do with ironing out, it’s truly a great game through and through. I’m eager to see it get even bigger and better with the upcoming DLC!