I can’t quite believe it. Smash World Tour is FINALLY happening. A professional circuit for both Smash Melee and Smash Ultimate. This is incredible!  Who would have thought we could exist in a timeline where one of the longest running Fighting Game scenes would finally get an official World Tour backed by Nintendo…

No one… Nintendo isn’t backing this… 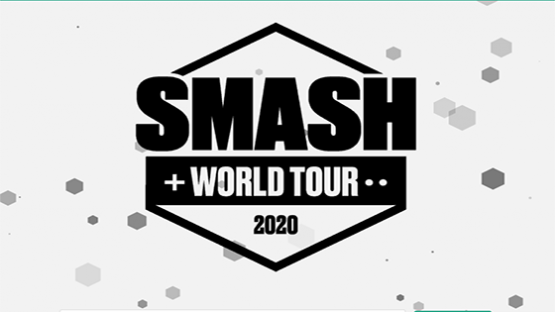 Who are the heroes that are backing this tournament circuit and providing a whopping $250,000 prize pool you ask? That would be VGBootCamp! VGBC is a Smash streaming and media producing company formed around the end of 2009 by GimR. Just look at their YouTube channel. They have thousands of Smash Bros replays from tons of events all for free.

These guys have been putting in the work for the people for so long, even when times were tough for them. It’s great that VGBC will be a part of a huge leap in Smash history. The purpose of the company always was and still is to grow the Smash scene in any way they could. Now, over a decade later they have finally achieved a tremendous feat in creating a World Tour for one of the most grassroots fighting game scenes.

I want to briefly talk about why this is a massive deal for the Smash scene. Smash has been around for a long time, you could go back as far as the Nintendo 64 and I guarantee you will find a competitive scene for the game. However, I would say they game really took strides with the release of Smash Melee for the GameCube. This is where the competitive scene really exploded.

There is a reason that almost 20 years later, this game is still being played and is still considered one of the greats when it comes to fighting games. The later Smash games also had their competitive scenes, up to present day where we now have Smash Ultimate.

Now, in all these years of Smash pulling in great numbers at EVO and Genesis etc… Having a massive scene and selling huge numbers of copies, Nintendo has never backed the competitive scene. It’s a little unclear why. There have always been murmurs about Nintendo or Sakurai not being the biggest fans of Melee, or the way the community prefers the competitive format of no items. I don’t think we were ever given a completely solid answer though. This has meant that the Smash scene has been entirely help up by the community, which is absolutely incredible.

he Smash World Tour is an International tournament series in which competitors for both Melee and Ultimate can qualify for the Smash World Tour Championships. By attending events, players will earn points, and at the end of the year, the top 31 players will be invited to the Championships. There will also be the classic Last Chance Qualifier where the last player will be decided. Events will be taking place in: USA, Canada, Mexico, Japan, UK, France and Australia. $250k+ prize pool.

The World Tour will have three tiers of events: Silver, Gold and Platinum. The best results from these 3 tiers will determine the players spot in the leaderboards. The following contribute to your ranking:

Like with most current World Tours, the points will break down slightly differently at the Silver tier,  depending on the size of the event. 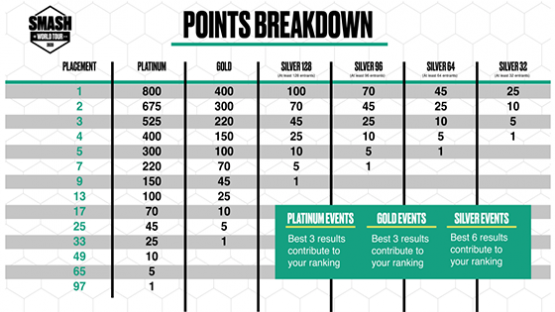 What’s great about the way they have set out this format is that events of all tiers matter. The current PGR format for players demands that they go to as many events as possible and get as many results as possible. This really favours the sponsored players who have the money to attend all of the events, whereas now, players results will only matter from the top 3 platinum and gold events along with the top 6 silver.

Because of this, even small events that opt-in to become silver tier events on the tour hold weight for the players, as they also contribute to their overall standing on the leaderboards. This system seems really healthy and supports the smaller scenes.

The Smash World Tour will be kicking-off on March 13th at CEO DreamLand! Make sure to tune in! This is a huge moment in history for the competitive Smash Bros scene!

Join the discussion on the Smash World Tour!