You’ll be hard pushed to find a Sword Art Online Hollow Realization Switch Review. I guess having already been out on PS4 for some time, people don’t feel the need to do one – it’s also one of those games that, honestly, not many people seem to care much about.

And that’s exactly what this Deluxe Edition is, an excellent ARPG. But damn if it doesn’t make you work to find that out. 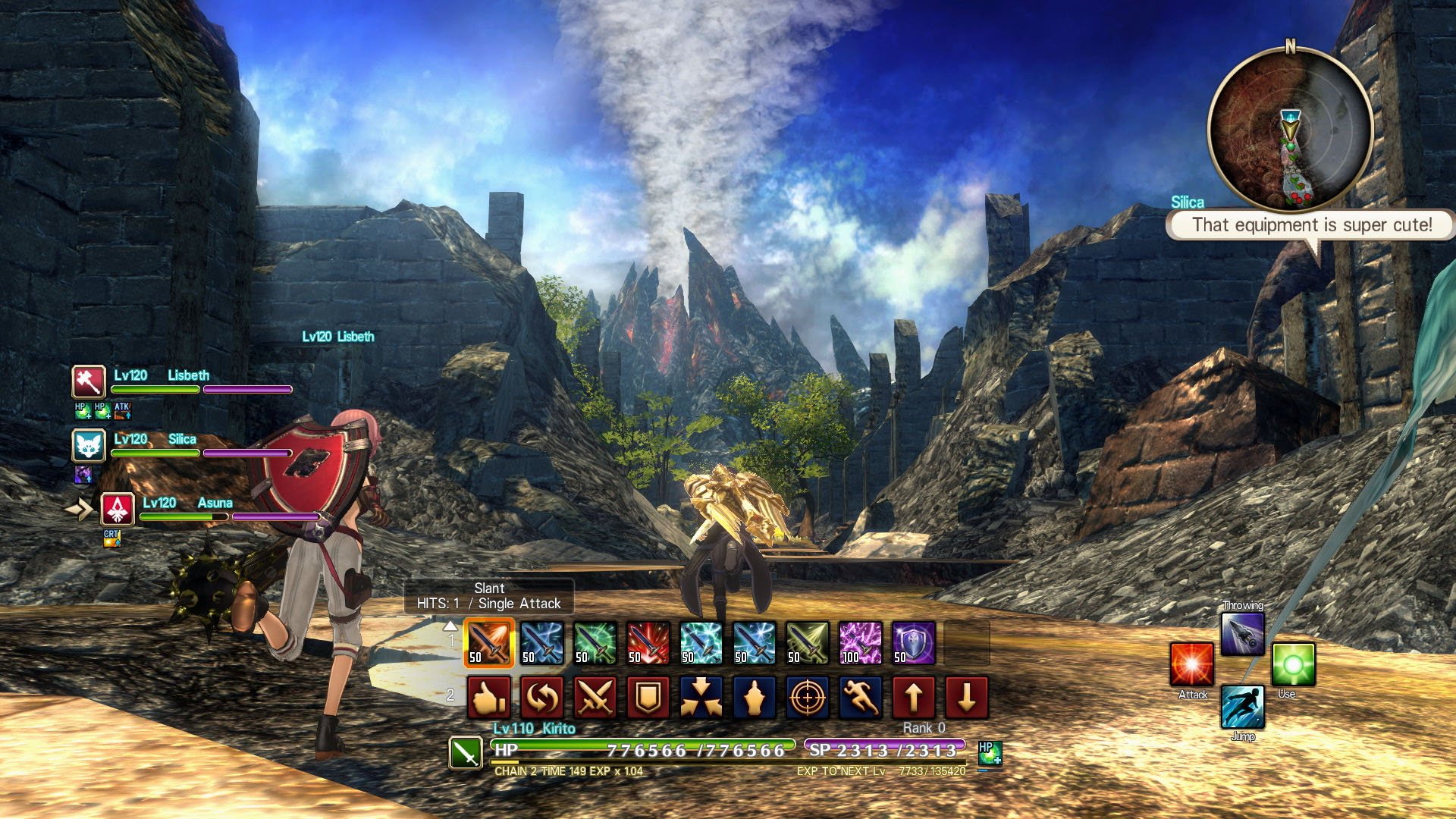 I expect I’ll have had an easier time of it than most will. I like SAO. People love to hate it. Me? It’s a guilty pleasure of mine and I don’t care who knows it. I genuinely like the characters in what, honestly, amounts to a sci-fi fantasy harem action anime. If you’re not a fan of SAO, let me condense it down for you.

The original SAO boiled down to a bunch of characters trapped in an MMO. If they died in game, they died in real life. The only thing they could do was to beat the game and survive – which they did. Since then, subsequent SAO’s have basically boiled down to the same bunch of friends (and some new ones each time) doing very serious, important and dangerous things inside a VR/AR videogame. 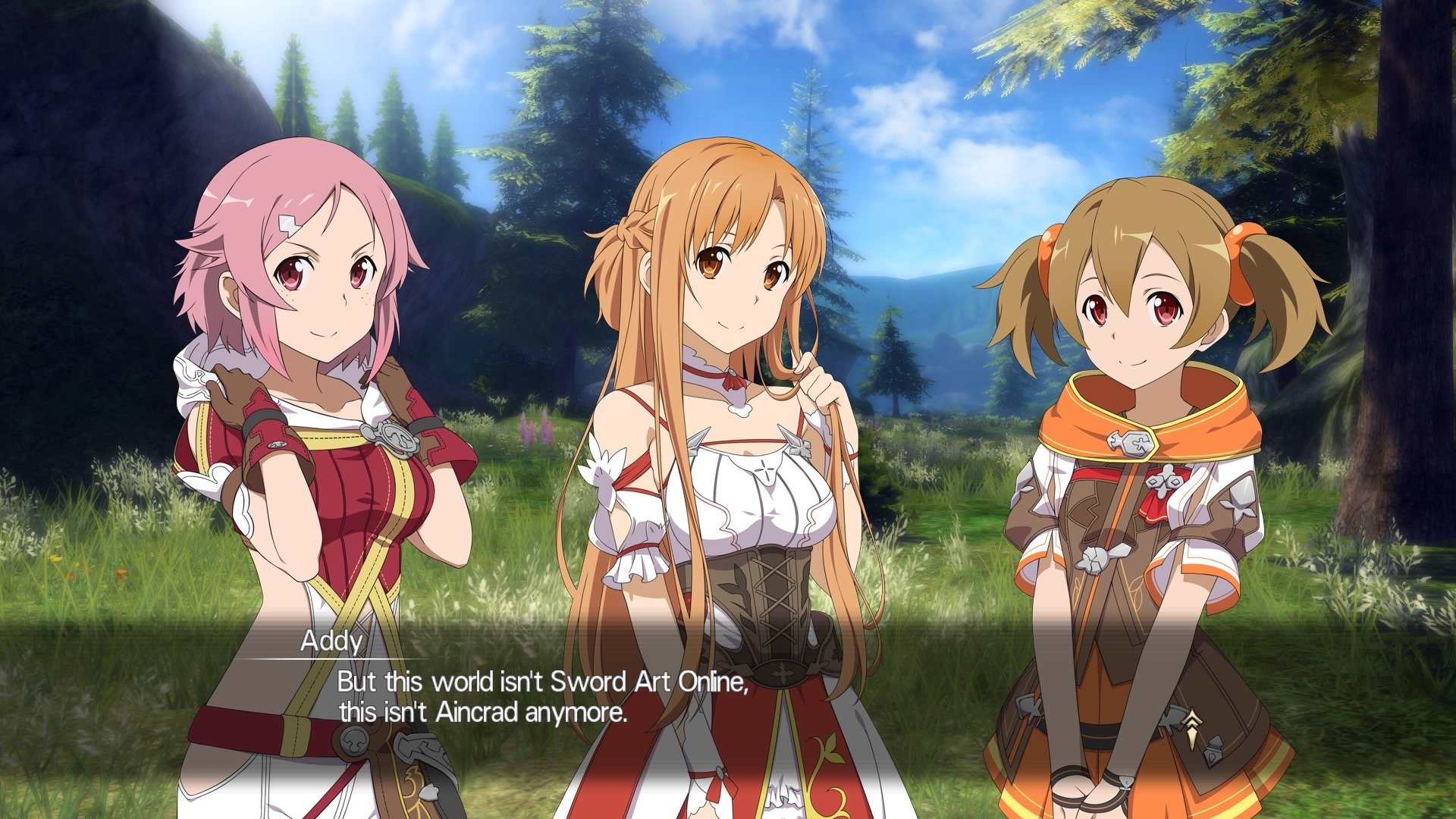 Hollow Realization is no different. In Hollow Realization, Kirito and friends have joined the beta for a game which is based on the original SAO world Aincrad, renamed Ainground for this new game. Featuring the same town and similar locations – they join the game for fun, but it doesn’t take long for things to get serious once again…

And so your Action RPG adventure begins. Or so you’d think.

Hollow Realization takes an inordinate amount of time to get going. First and foremost there is an insane amount of dialogue in here. Even for me, baring in mind I’m 100% emotionally invested in this universe, I found it heavy going at times. There’s a lot of what I can only describe as ‘SAO banter’ – just skits between characters talking about super-casual stuff and not-so-casual important story stuff. 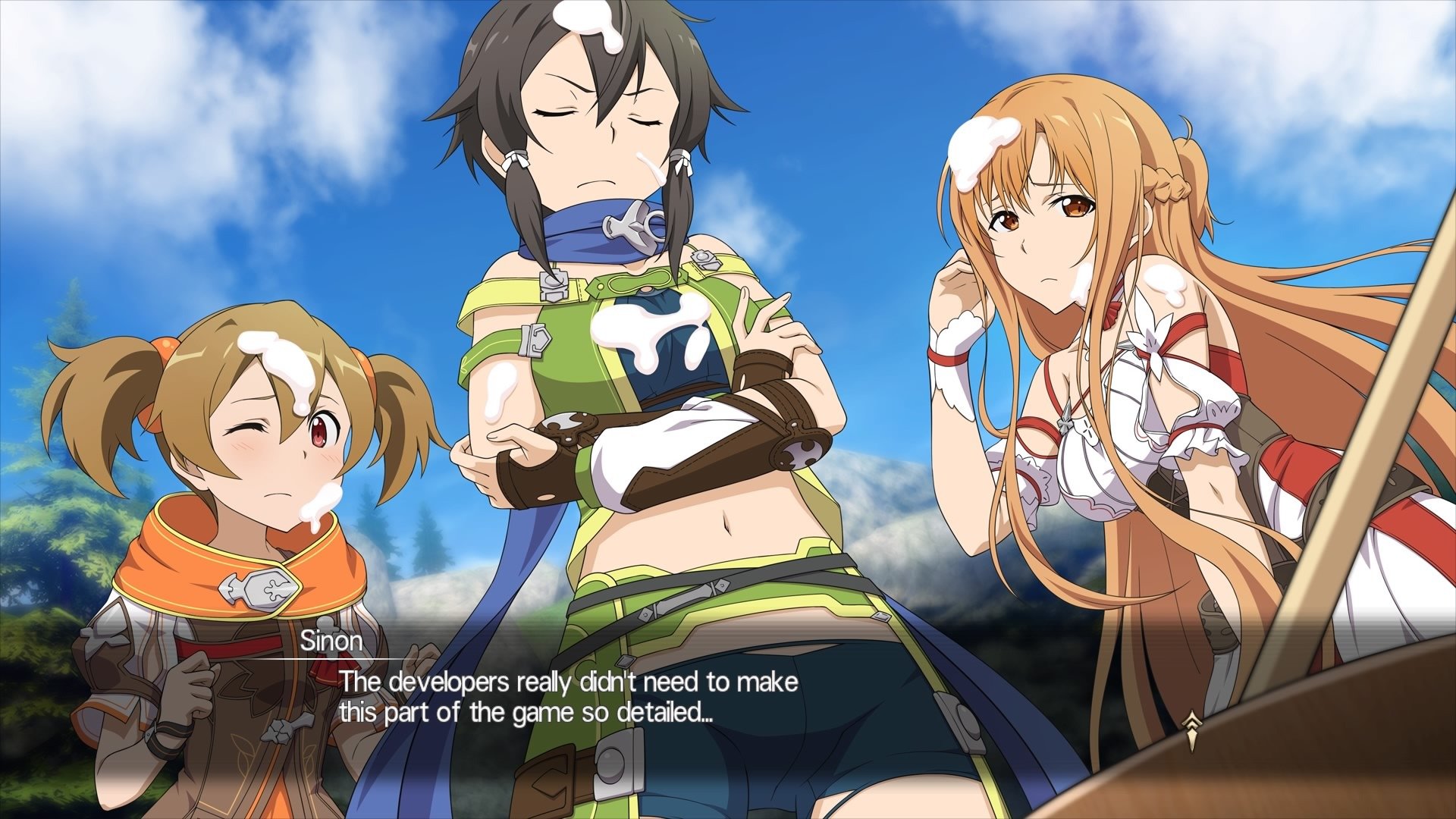 If you are not a fan of SAO in any way, you’re going to spend literally HOURS wondering who’s who and what the hell is going on and why you should care.

That’s layer one of the action RPG fun blockade. The second layer is the game’s systems. Having already played this on PS4, Hollow Fragment, Lost Song and Fatal Bullet, I know what to expect in terms of SAO games’ mechanics tutorial delivery and can roll with it. But for someone coming in cold? 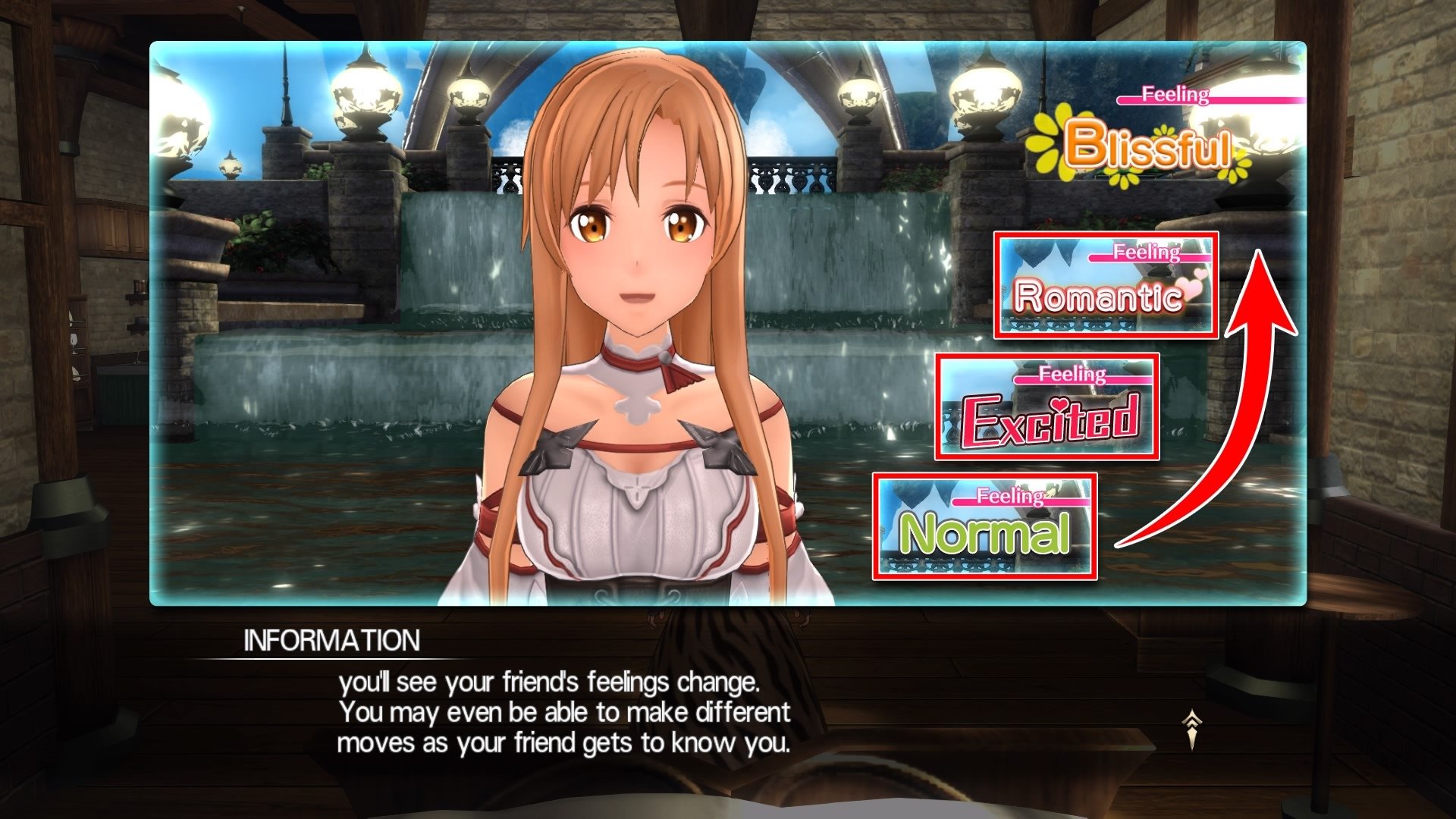 DING! Here’s something new for you to skim read. Now go back into the menu and dig out the entry again so your brain can try to figure out what the hell it was talking abour. Now read it again as you try to apply it in game and understand it. The go back into the log again the next time you log in to make sure you understood it correctly the second time.

You will have no idea what’s going on.

You will have to work for this. 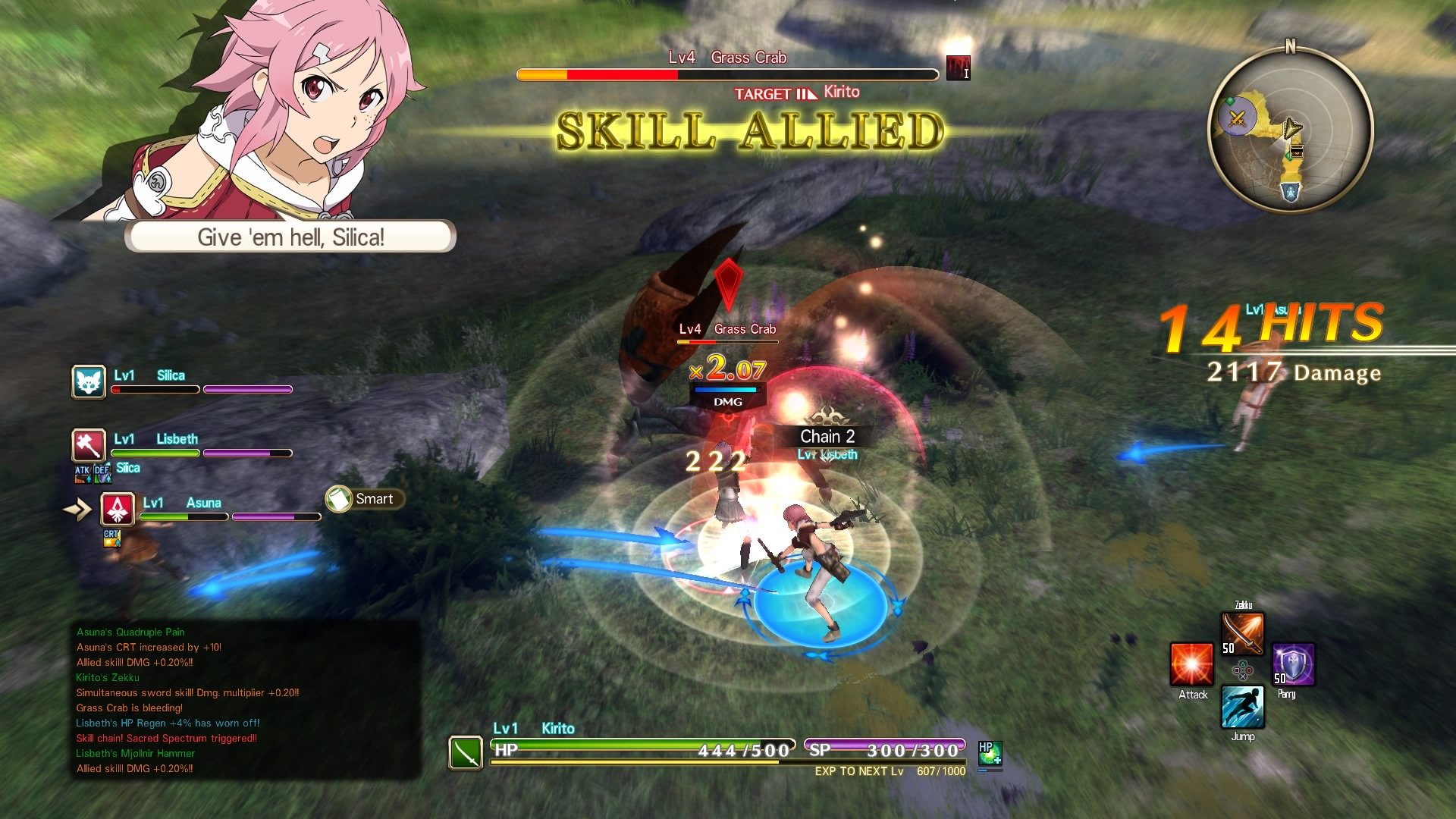 I have no doubt you’ll feel this Sword Art Online Hollow Realization Switch Review isn’t going to work out so well. And it’s a shame, because dig though the first… er… four hours, have the tenacity to hang in there, and you’ll find an excellent and most worthy ARPG.

Dialogue and universe fluff aside, SAO: Hollow Fragment reminds me very much of Phantasy Star Online in that it opens in green fields, slaying monsters for XP, picking up loot, teleporting back the main town, picking up quests – and then rinsing an repeating.

The more you play the more skills you unlock for different weapon classes, you can then bend and shape you character to your play style. But in many ways SAO does a lot that Phantasy Star doesn’t – namely the forging of relationships with the game’s NPC cast, and thus shaping their abilities and so the effectiveness of the party you choose. 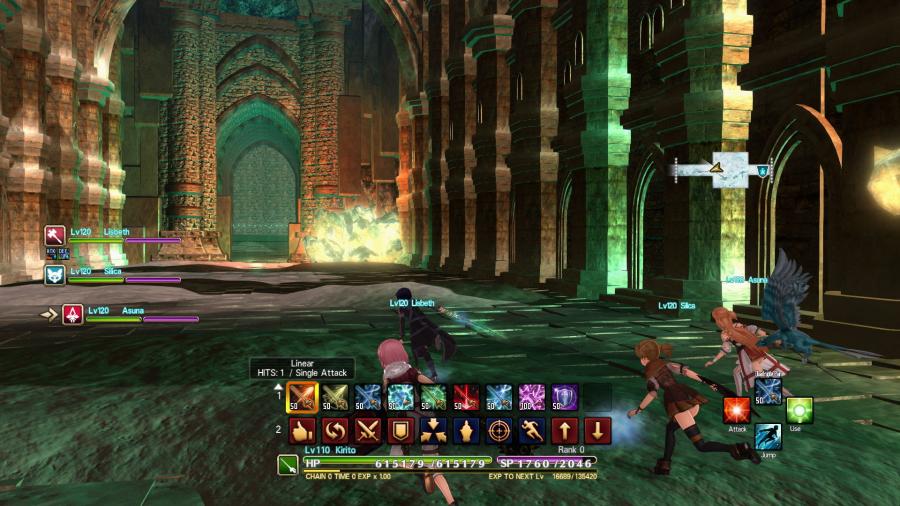 Your tasks in the ever expanding overworld boils down to battles with low level grunty monsters, to build up levels and skills, a little exploration, the running of instanced dungeons and, lastly, the taking on of much more powerful high level monsters.

It’s in the taking down of these more powerful beasts that you see the game’s battle system really shine. Hollow Fragment is entirely action/realtime based – with more powerful attacks working on cooldown. The main thrust of combat involves applying pressure to build damage combo meter, before choosing to synchronise your most powerful attack to optimise damage output.

If you don’t get the battle system at all, you’ll find yourself just endlessly doing chip damage, but once it clicks there’s huge satisfaction to be had from scything off massive chunks of HP from the games tougher bosses. 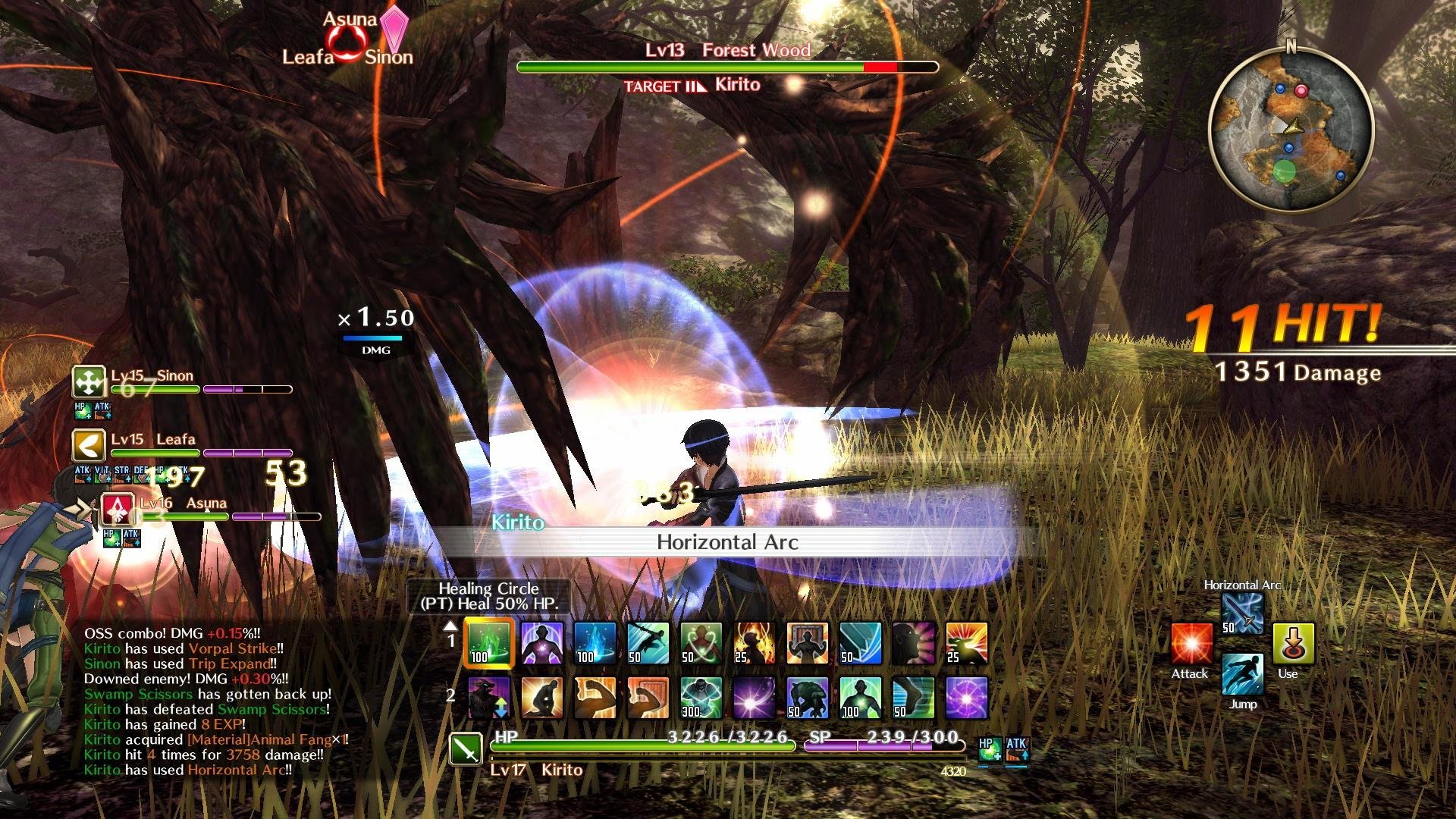 The scope for customisation is also very impressive, from the team you use, to the weapon you prefer, to the skills you assign to your pallete. The scope for mixing up your play-style is pretty impressive. So to is the amount of meta-busy work the game gives you. Crafting, romancing, building relationships – the amount of content here is bordering on the obscene, especially as it takes in all the DLC (hence the Deluxe Edition).

You are, without a doubt, looking at close to 150 hours worth of play here. Easily around 60-70 to get to see everything in the main line quests – more so if you want to optimise via crafting and side questing. And if you want to team up with real-life friends to take on the tougher enemies together? Then plenty more hours besides.

Sure, it might take you a couple of solid evenings to break though the barrier for it all to make sense, but when you do? It’s easily one of the best action RPGs on Switch.