I have a great love for Sonic as a character and a universe. The games might not always be the best, in fact some of them are god-awful, but sometimes the Blue Blur has his name placed on a genuine gem of a game. This year we’ve already had the incredible update to Sonic Mania, and now we have Sumo Digital’s Team Sonic Racing.

The basic gameplay here is that of a simple racing title, but Team Sonic Racing far outgrows such a narrow definition. All of your usual speed boost panels on the tracks, floaty but solid drifting, and weapons for dispatching your foes are all here. In fact, even if there were no other mechanics in Team Sonic Racing, just this gameplay is incredibly solid and enjoyable to play in itself.

But, there’s the team mechanics to consider, which change the gameplay a lot. The twelve racers on the course are divided into four sets of three, and each of these sets are a team in their own right. In each team there is a Technique, Speed and Power racer, each with their own abilities, advantages and disadvantages. For instance, Technique races aren’t the quickest, but suffer no penalty for driving through grass. 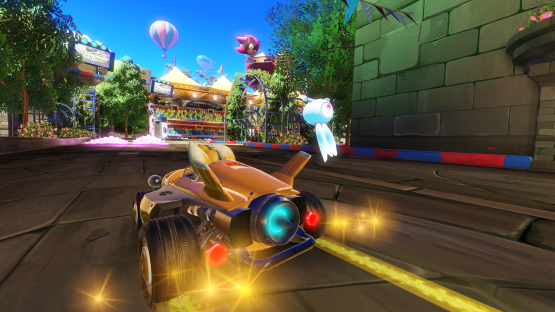 Also, your team are all working in tandem with one another for the whole race: driving in the slipstream of a teammate will slingshot you with a boost of speed; you can trade items, giving weapons to suffering members of your team; and you can all perform a Team Special once fulfilling certain prerequisites to aid all members simultaneously. So, the focus throughout is on teamwork first and foremost.

As a final fantastic feature, the winner at the end of a race is determined by the placement of your whole team, not just you, so you can’t play simply blaze ahead and hope. You have to be keeping an eye on where your teammates are during the race, and assist them whenever you can, and this gives an underlying level of strategy in the gameplay that doesn’t exist in other racers.

Team Sonic Racing has a great roster of characters, taking in a large variety of the history of Sonic the Hedgehog. So you have the classic team of Sonic, Tails, and Knuckles alongside teams like Blaze, Silver and Vector, otherwise known as a team that upsets me personally as this means that Team Chaotix have been broken up. The other teams confirmed are Shadow, Rouge, E-123 and Amy, Chao and (of course) Big the Cat. 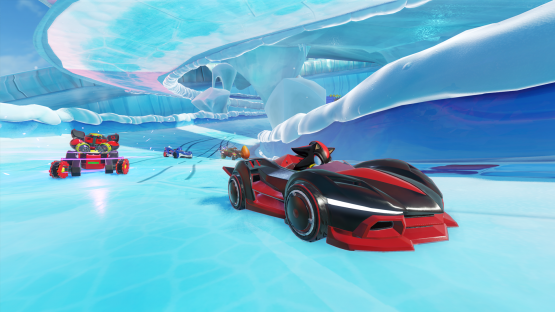 I had the great privilege of speaking to the PR for the title at EGX and was clued in on some more features that will be in the full game. The first is that there will be the opportunity for car customisation, giving a fair amount of player involvement with their chosen character. Secondly, there will be full online multiplayer, including the ability to play the game in co-op two other players, which will be fantastic for really using those team mechanics.

Last but not least, I found out that the full game will contain a total of 21 tracks, and 15 characters in total. This means that there, at the time of writing, is still one more team to be announced for the game. As the only Sonic mainstays not to currently be in the game, Dr. Robotnik (Dr. Eggman) and Metal Sonic, are surely a given but it’s anyone’s guess as to who the third in that team would be.

Team Sonic Racing looks pretty simplistic visually, but everything it has are all solid and smooth. All of the characters, cars and courses look great and all of the car designs especially are carefully considered and perfectly match each character. All of the sound design is simple and solid too, but unlike the visuals, this makes all of the aural side of the game utterly forgettable. Even before playing the title it’s pretty evident, especially with several consistently great racing titles with Sonic characters under their belts, that you’re in for a treat from Sumo Digital; but to play it is another beast entirely. The game just feels great to play; all of the drifting feels satisfyingly weighty, the weapons punchy and effective, and the team mechanics have been implemented into the core gameplay tremendously well.

We don’t have to wait long either, with the game dated for a Winter 2018 release, and I cannot be more excited. Do you think you will pick up the title, or is this not really your thing? Let us know in the comments or on Twitter, and check back here for more coverage of this title, and other Japanese games.

Irish The Hedgehog Is A Real Thing

Sonic the Hedgehog Movie Delayed To 2020

The Sonic Movie Trailer Is Out … And It’s A Thing
Recommended Products from our Store: