Having missed out on the game during its original release on PS Vita, I was excited to experience The Caligula Effect: Overdose in all its shiny PS4 glory and dive into what this visually striking JRPG has to offer. Unfortunately, that happens to be a bit more style than substance.

The story’s premise is nothing special, being another riff on ‘people end up in a big special school and some of them form a resistance group trying to leave’ (see: Angel Beats, Bad Apple Wars, etc.). These kinds of plot lines tend not to sit well with me, and The Caligula Effect‘s is sitting pretty on that list. The protagonist becomes aware that the world they are living in is not the real one, and is instead μ’s fabrication, created with the goal of banishing all sadness and the not so subtle condition that you are never allowed to leave.

A bit more style than substance. 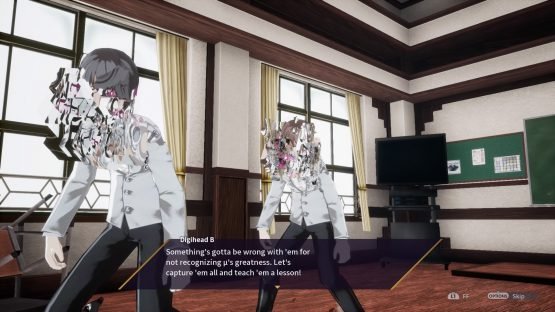 A small group of students who have awoken to this fact and want to leave μ’s supposed paradise form a group called the Go-Home Club and set about trying to escape while defending themselves from the daftly named Digiheads who have succumbed to the power of the pervasive digital music listened to and worshipped throughout the school, making them into aggressive, glitchy semi-monsters.

So ensues a very musical goose chase, as the Go-Home Club wander the boundaries of Mobius to track down μ and kind of force her to let them go somehow. Along the way, they encounter various quirky characters who are either with them or pointedly against them, and the sorrows they should have left behind in Mobius are gradually unearthed. 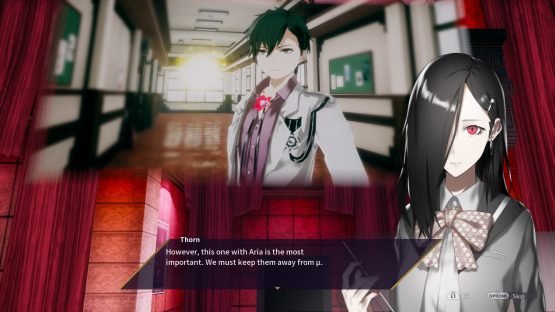 I’m not a big fan of blank slate protagonists, and The Caligula Effect: Overdose is no exception, offering a player-named generic-designed nobody who has little personality to offer, even with the player being given some choices to make, and whose only redeeming (?) features are combat prowess (which they awaken to before anyone else, because of course) and the option to choose between male and female versions. The latter makes a bit of a change though!

The other principle characters are a fairly interesting bunch when you manage to get through the initial cliche anime stereotypes, and the game does a good job in making you want to learn about the secrets you know they’re all harbouring. What sort of acts as the protagonist’s saving grace is the Forbidden Musician Route, a feature new to Overdose where you’re able to team up with the Ostinato Musicians and try to thwart the Go-Home Club’s attempts at leaving Mobius. This is a role that makes the protagonist stand out from the rest of the party, and is one that understandably wouldn’t be available to you without them. 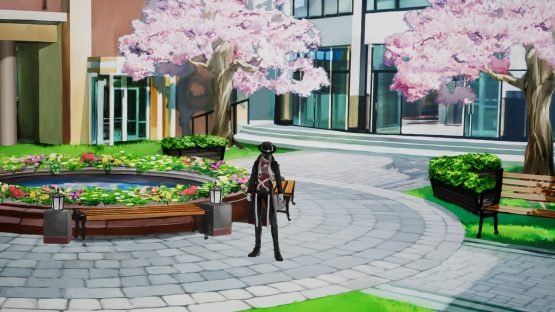 Having dabbled a little in the dark side, it’s a great idea to be able to bond and side with the bad guys, even though, like many things in Overdose, its implementation is a bit clunky. With you on the side of their precious μ, the Digiheads have no quarrel with the protagonist’s Ostinato Musician alter-ego, Lucid, so you find yourself fighting off the non-corrupted ‘laggards’ instead. That makes sense in theory, but the other students of Mobius have always been a bit of a neutral party, so having them randomly attacking you just feels kind of off.

Still, the opportunity to turn traitor yourself is one it would be interesting to see more games experiment with and I’m glad Overdose is one of them, with the concept of everyone coming to Mobius to escape real life leaving you curious enough about the enigmatic Ostinato Musicians who are essentially running the show to tempt you over.

The combat is unique to say the least, though not always in the game’s favour. 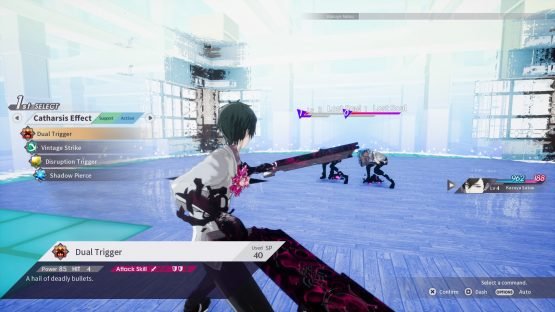 Fear the power of my mind gun!

The combat is unique to say the least, though not always in the game’s favour. The Imaginary Chain gives you a glimpse of what your attack might do, but is not fortune-telling, making it ultimately a glorified hit rate. Sadly, sometimes simpler is better, and the Imaginary Chain just might be one of those times. Replaying different combinations of attacks to see what may or may not happen with each set is more tiresome than useful.

The ability to change timing on your scheduled attacks is pretty neat, however, letting you pace the moves you string together in a way to minimise the damage you take while optimising your own offensive output. It’s a bit of a hit or miss, with some battles leaving you feeling like a smug, successful strategist and others devolving into a messy clutter of gunfire and people running left, right and centre. 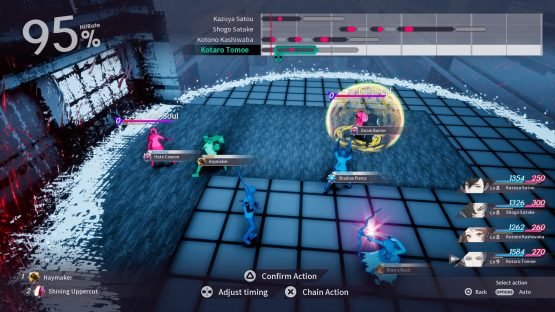 On top of the Imaginary Chain, there are factors such as stress gauges and Risk Breaks to take into account. When a character’s stress gauge is full, they can perform a particularly powerful Overdose attack. Risk Breaks, on the other hand, make enemies more vulnerable. Add all these elements to playable characters having various intended roles in battle and moves that require meeting particular conditions (an enemy being airborne, for example), as well as the equippable Stigma skills having more stats than they really need, and it can all get a bit too much.

A key example of this is the awful NPC befriending system. The Caligula Effect: Overdose‘s attempt at letting you befriend 500 NPCs is admirable, but excessive. Even with the Causality Link – a handy map of who’s in which class and how characters are connected to each other – it’s hard to keep track of who’s who. Many of the interactions you’ll have with these characters boil down to a few repeated stock phrases, and each one features a fade to black because apparently writing actual conversation is too hard. In case you get bored of repeatedly talking to these nobodies face to face, you can also text them to much the same effect by finding their name amongst the reams of others in your phone. So, it goes from finding a needle in a school-shaped haystack to finding a needle in a digital haystack, which is not much of an improvement. 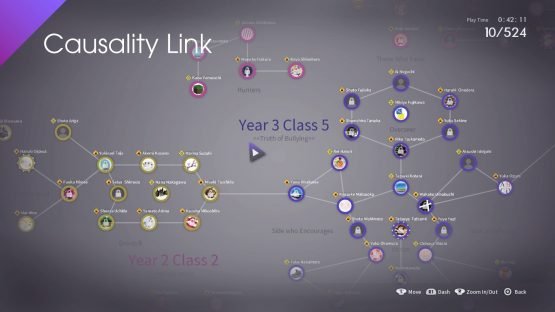 Maybe just 100 would have worked?

These dull exchanges reward you with fetch quests where you can obtain extra Stigma, though Stigma are so easy to come by just in running around that it makes all the toing and froing for extra ones more hassle than it’s worth. In case that wasn’t enough, there’s also special areas you can only get into with cryptic code words occasionally dropped by enemies where you can find even more people to aggressively befriend for their skills. Overdose‘s biggest problem is arguably its generosity, as it likes to give the player more to see and do that it can actually keep up with itself. All in all, it tends to falter from its love of excess. 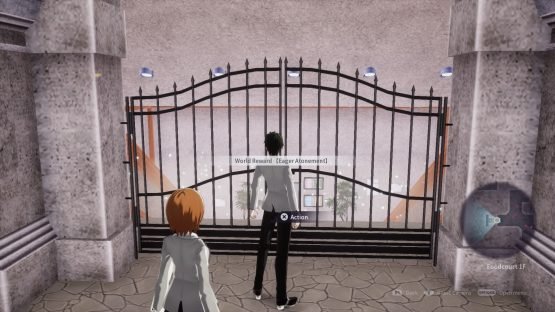 Jot that one down as somewhere I’m never going.

Another case in point, there are too many random enemies. The game’s dungeons and town equivalents are one and the same, meaning enemies are always popping out to ruin your day while you try to grind those NPC relationships. This is made more of an issue by how slow the battle system can be, with no quick way to just skip over a character and previewing then scheduling all your moves can easily become a bit of a chore. You can weave between Digiheads to avoid surplus combat fairly smoothly for the most part, but it’s only a matter of time until you’re forced to take routes littered with crazy students that need common sense knocked back into them and the combat is not engaging enough to pull it off as often as it attempts to.

It’s a shame because there’s a lot of good in The Caligula Effect: Overdose, but its stronger aspects get clouded over or diluted by the sheer amount of everything. I’m not usually one to complain about a game giving me extra, but it damages Overdose as a cohesive game overall. It’s kind of as though everyone sat down in a meeting, brainstormed ideas that inspired them, and then went “yeah, that’s good, all of those” and called it a day. Any one of Caligula’s main ideas could make for a beautiful game with enough time and attention, so it’s sad to have them carelessly jumbled in together.

The Caligula Effect: Overdose excels in its looks and sound. 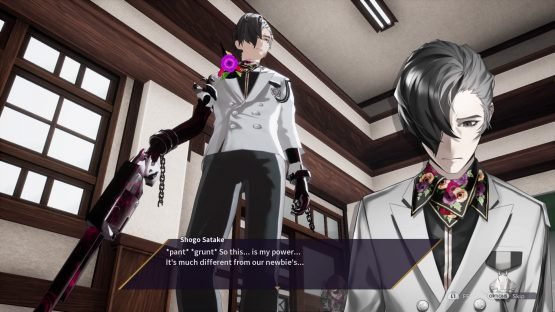 The Caligula Effect: Overdose excels in its looks and sound, however. The game’s drawn sprites are stunning, with a penchant for monochrome tones and small, vibrant splashes of colour that do well in illustrating the game’s key themes and making the main characters stand out in a sea of similar uniforms. The characters are rendered quite nicely in the 3D models too, even if their mouths never moving is a little weird. Similarly, the game’s music is incredible, which is kinda to be expected from a game that features the talents of such iconic Vocaloid producers as 40mP and [email protected] The music seamlessly swaps between instrumental and vocal versions as you go in and out of battle, making it a smooth listening experience without the usual jarring choppiness of tracks changing. In keeping with their brainwashing capabilities in-game, the songs are alarmingly catchy too.

The settings are a bit more of a mixed bag. Their attention to detail makes a change from similar RPGs with very bland, vast dungeons, but they’re ultimately still pretty repetitive, making it very easy to get lost while running back and forth to activate plot points. Still, each Ostinato Musician has taken charge of a different area, making them very distinct both in visual and sound design, and it’s so nice to have plenty of time exploring outside of the horribly labyrinthine school halls. I can’t stress how much of a nice change of pace it is for Mobius’s limiting world to still include beyond the main school area. The school is the main hub of the world’s facade, but it’s still just one place in many you’ll be visiting, thank goodness. 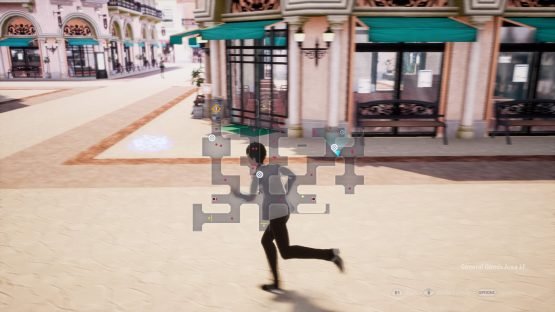 The mini-map is your best friend, Aria be damned.

In the end, The Caligula Effect: Overdose attempts some remarkable things, but has a tendency to feel like it’s trying to do too much at once, piling on systems like there’s no tomorrow and making certain aspects of the game a bit of a chore. I’m harsh to Caligula Effect, but when my Catharsis Effect awakens you’ll see that, for all that it’s a bit of a muddle, I actually quite like the game though!

It’s worth giving The Caligula Effect: Overdose a chance to get into full bloom. 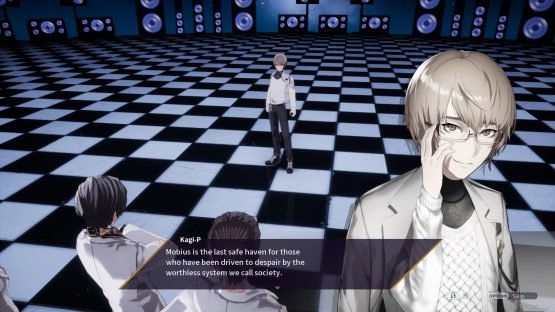 It’s worth noting that Overdose‘s lengthy first arc sells it short too. While the faux philosophical narrative can be a bit hard to swallow at times, the game definitely picks up as it goes. That or you stop realising how bad it is, like a lobster in a slowly boiling pot doesn’t realise it’s cooking. Whichever the reason, it’s worth giving The Caligula Effect: Overdose a chance to get into full bloom.

Given the team behind it and pretty much everything about how the game presents itself, it’s also nigh impossible not to compare it to Persona, and if you like the Persona series, then you’re bound to get some enjoyment out of The Caligula Effect: Overdose‘s take on things. It’s an interesting take on the same formula with a neat, musical twist. It just takes a bit of patience.