After many Touhou titles making their way onto PlayStation 4, here comes Touhou Kobuto V: Burst Battle, an arena-style fighter similar to last year’s Touhou Gensou Rondo: Bullet Ballet. It’s a shame that Touhou Kobuto V is in many ways weaker than its predecessor.

What was a bit off from the very start is that there is no tutorial. Controls are simple enough to figure out from the button configuration screen. Still, the inclusion of the tutorial would’ve been nice, especially for beginners to the genre.

In Touhou Kabuto V there are three normal attacks and a special attack. Combining those with guard and dash buttons gives you slightly different attacks. The guard button doesn’t really work like a guard on its own so there isn’t any defense in the game. You can protect yourself from oncoming bullets by canceling them with one of your attacks.

You can also evade attacks by dashing. Dashing is done differently than usual as you have to toggle it instead of holding the button down. Dashing and other actions deplete your action meter. Action meter is very important because if it runs out your character stops from moving puffing from exhaustion, leaving you open to enemy’s attacks. Also, there is a separate action meter for each of your character’s three attacks. This somewhat prevents you from spamming the same attacks. 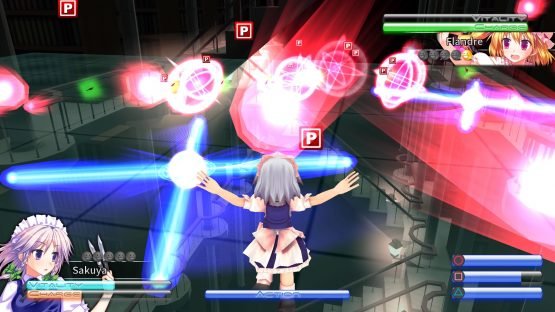 There is a story mode which starts out a bit unusual. You first beat it playing as Reimu, then as Marisa and later Remilia. After you have beat the game three times it opens up by letting you play as other characters. There is a bit of a visual novel style of narration, but overall the story mode isn’t that well thought out. It features some whacky dialogue and some Touhou lore jokes, but that aside it isn’t that different compared to what we’ve already seen in other Touhou side titles.

It is quite baffling why the character select screen isn’t available in story mode from the very start, or at least if they wanted to ease you in they could’ve put other characters in the mix after the first Reimu playthrough. Overall the story mode is a bit too repetitive, especially in the beginning when you have to pretty much play through the same battles over and over again. 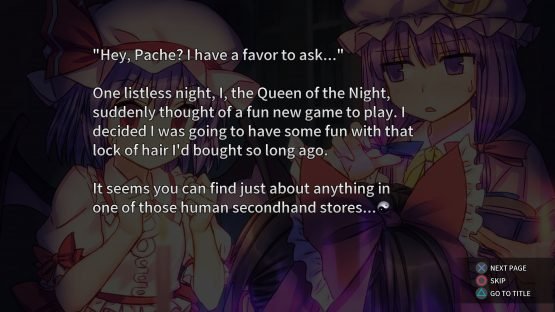 In terms of modes, except the story mode, there are the arcade and score attack modes, which are very similar. Then there are vs Com and vs Human modes. Vs Com mode supports Training and a Battle AI modes where you battle against the chosen opponent. Unfortunately, we weren’t able to properly test the online mode as servers were pretty desolate from the get-go. Then there is a VR support for those that feel adventurous. 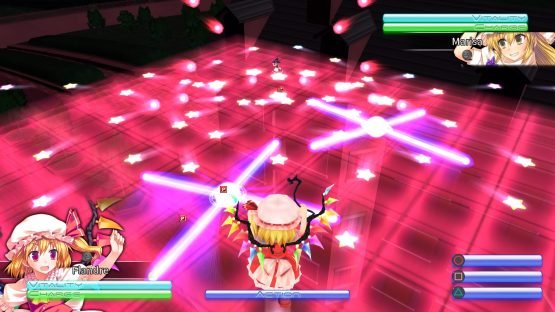 Touhou Kobuto V features some really cute visuals, where characters take up quite a bit of the screen. At the same time, the graphics really underuse PlayStation 4’s capabilities, but this is somewhat expected as the original was released as a doujin title in 2010. Still, the backgrounds could use more flare as they are mostly very flat, without needed detail that would give them more interest.

The soundtrack is a mixed bag. There are some average tracks mixed in with some other tracks which seem to be reused from Touhou Gensou Wanderer. This is mostly for the story mode parts. Generally, there really weren’t many outstanding tracks with this one. 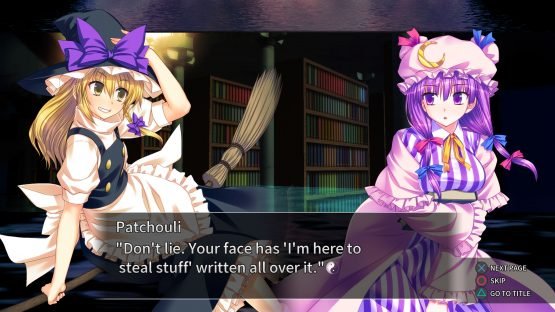 This is very far from a perfect fighting game. Most of the special attacks can kill you almost instantly, which can’t be fair. This could turn a fun round into who will be the first to activate his special attack. Some of the moves are so overpowered that they break the game. For instance, Marisa’s lasers are way too powerful and too easy to pull off. She can basically kill off any character in about three moves.

If you like retro games like Virtual-On and you like collecting Touhou doujin titles, in general, this might be up your alley. Touhou Gensou Rondo: Bullet Ballet is recommended if you specifically want an arena fighter with Touhou characters. Overall Touhou Kobuto V just doesn’t offer enough content to have staying power, but can be enjoyed for what it is.