This weekend has seen some great news head our way! It turns out that The Legend of Heroes: Trails of Cold Steel III is heading to PC sooner than expected, with a release date of March 23 set. Capcom have also announced the 2020 roadmap for Monster Hunter World: Iceborne!

NIS America announced at PAX South this weekend that the game would be heading to PC in the West, with the port being done by Engine Software and PH3 Games. Trails of Cold Steel III has been out since October 2019 in the West, but only on PlayStation 4. This spring will also see a Switch version of the game, but we don’t have a solid date on that yet.

You can buy Trails of Cold Steel III on Steam or GOG and it releases on March 23. 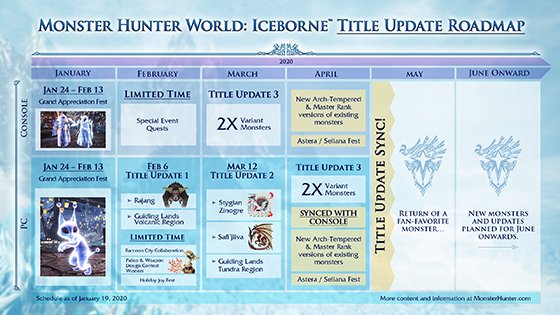 Capcom have revealed their roadmap for Monster Hunter World: Iceborne for 2020. The expansion has recently released on PC and thus you can expect things to be different depending on your platform of choice. That is until April, when all platforms sync and updates will be the same no matter which platform you play on!

If you’re on console:

Pick up Trails of Cold Steel III on PS4!