Recently the fighting game space has become increasingly crowded with excellent 2D fighters, as well as 3D games that try to mimic the frantic nature and stylish presentation of their 2D counterparts. Under Night In-Birth Exe-Late[st] is the latest installment of this unique franchise and the first on PlayStation 4 and Vita. But is the market big enough for yet another challenger?

The original was released in Japanese Arcades way back in 2012, while it first hit western shores as Exe:Late for the PlayStation 3 in 2015. Under Night In-Birth Exe-Late[st] deserves a medal for what is probably one of the most ridiculously named games out there. It doesn’t do much to disrupt the formula that its predecessor laid out, but instead polishes it further making for a far more enjoyable package.

To get it straight out of the way, even on PlayStation 3, Under Night In-Birth Exe-Late[st] didn’t make much use of the hardware at hand. This holds equally true for the PlayStation 4 version, which barely offers any noticeable visual improvements. The 3D backgrounds are slightly sharper and characters look less muddied. But when all is said and done it is way too little to improve the overall look of the game. With that being said, the 2D animations are still phenomenal and really add life to the whole experience. The soundtrack is equally competent and keeps the heart pumping during the tense battles.

It’s in these battles where everything falls into place. The developers at French-Bread once again show how to make a tight fighter. Under Night In-Birth Exe-Late[st] offers one of the most satisfying fighting game experiences out there. The combat is fast-paced but you always feel in control. The game allows newcomers to easily jump into battles and have a great time, but still rewards those who go the extra mile learning the ins and outs of its systems. 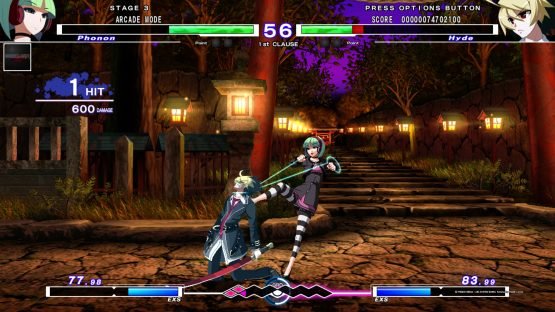 Under Night In-Birth Exe-Late[st] favors aggressive play with its Grind Grid mechanic. Approaching your opponent, attacking or even successfully defending increases your end of the GRD bar at the bottom center of the screen. Once the bottom timer runs out, any player with a larger portion of this bar will enter the so-called Vorpal state. Vorpal gives you the ability to dish out more damage and convert this bar into energy for your special attacks. This makes battles feel like a constant tug of war as each side is looking both to damage their opponent as well as time their moves with the GRD timer.

Like in Melty Blood before it, characters have a special gauge which goes up to 200% and most of the basic special moves have a super version which uses up this gauge. When you need a bit of extra power you can activate the so-called Veil Off which serves as a burst which sends the enemy flying and gives you a limited amount of time to trigger your super moves before your special gauge drops to zero.

The Late[st] addition to the game (excuse the pun) is the Cross-Cast Veil Off. This mouthful of a move lets you cancel an attack in order to enter a new form of Veil Off which lets you chain your EX attacks and ultimate attack.

All the characters from the original make a return as well as four newcomers: Wagner, Enkidu, Mika, and Phonon. 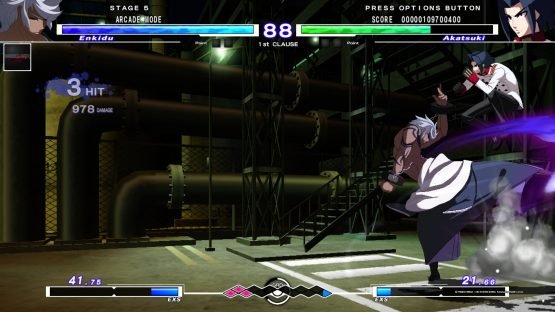 Wagner wields a shield and flame sword. While lacking any projectile attacks her speedy nature and rushdown abilities make her a force to be reckoned with. Her Sword Thrust lets her lunge forward at an enemy, turning herself into a flaming projectile, quickly closing the gap between any opponent.

Enkidu is a close combat fighter. Unlike Wagner, he copes with projectile pressure with the help of his skills which let you counter-attack and nullifies projectiles. Whenever he successfully counters an opponent they are left in a Havoc state which lengthens the duration of any hitstun the opponent may get, making Enkidu perfect for players who like to play more reactionary.

Yet another close-range fighter, Mika uses her giant gauntlets in order to bring on the pain. Despite how she looks, she is a rather mobile fighter with powerful strikes and devastating throws. 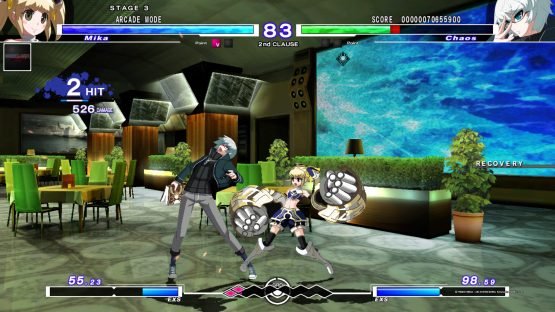 The green-haired headphone girl, Phonon, is the technical character from the bunch. She plays somewhat similar to Eltnum with her long-ranged attacks and her great zoning abilities. Her whip gives the ability to both push away enemies as well as drag them closer.

Whereas I originally criticized the game for a lack of content, Late[st] has gone above and beyond fixing this. When you start the Under Night In-Birth Exe-Late[st], you are greeted with whopping 16 options in the main menu, granted there are Options and Return to the Title in this list, but it is still a pleasant surprise.

Arcade, Survival Attack and Time Attack all make a return, while a ton of new modes help spice things up. The once incomprehensible story which was relegated to periodic obscure dialog in the Arcade mode now has a full featured story mode called “Chronicle Mode”. Here you have various character story episodes each with a number of chapters finally fleshing out this intriguing world. However, like in Arc System Works’ recent outings, the Chronicle Mode is more of a visual novel than your typical fighter story mode which is usually interspersed with battles. Still, it is nice to slowly get a grip on the motivations of these characters. 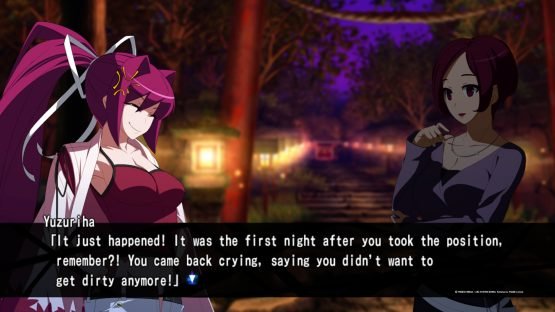 Where its predecessor only had a basic rudimentary training mode, Late[st] has a full-on tutorial mode. Through its 179 courses, the game teaches you everything from the basics of fighting game concepts to advance mechanics unique to UNIBEL.

Once you get a hang of the core concepts you should hop into the so-called mission mode where you pick one of the numerous characters and slowly learn the ins and outs of their skills and combos. There is now no excuse not to be prepared for real-life opponents.

We can’t talk about fighting games without mentioning the multiplayer. Aside from the standard offline versus modes you can take the battle online. Like its predecessor, the netcode is pretty solid, offering a solid experience with little to no lag. Just be prepared to have your ass handed to you until you get the hang of things. 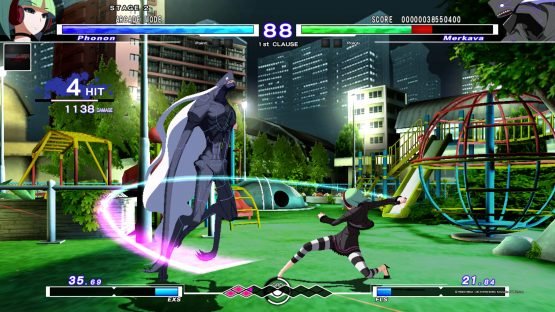 This enhanced version brings enough additions to the table to justify a purchase even if you had bought the original. Longtime fighting game fans will have a lot to look forward to, with its excellent combat and numerous modes, while newcomers will be greeted with a far more accessible experience thanks to its rich training modes and meatier story. It’s definitely not for everyone with its subpar visuals for this day and age, but scratch the surface just a bit and you will find a fighting game unlike any other.